Sumit Bhattacharya paradrops into the eastern Uttar Pradesh temple city to find it enjoying its moment in the national sun. 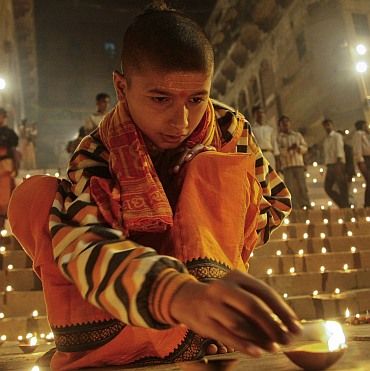 Yogesh Dubey, 18, is among them. He is ferrying people into the temple city, which has emerged as the site for the electoral battle royal of 2014 -- self-anointed prime minister in impatient waiting Narendra Modi versus self-anointed anti-corruption mascot Arvind Kejriwal -- in what he calls the 'Modi taxi'.

Dubey, whose father is an alcoholic (“drinkard,” he says), says he worked for three years at a lamination factory near Surat. But he likes to invoke The Mother in his expletives more. Like when asked why Modi, and not, say, Murli Manohar Joshi, the Bharatiya Janata Party veteran and incumbent member of Parliament from Varanasi who made way for Modi.

“You would see Joshi only during elections, otherwise even if your mom got f***ed you would not be able to find him,” Dubey declares. “Look at this road, they call it a highway! In Gujarat even the local roads are better than this. There are no poor people in Gujarat. When Modi comes he will make UP Gujarat. Earlier people used to say Bihar is the worst, now Bihar has become Delhi (developed).”

What about Varanasi's roughly 300,000 Muslims? “Unki fati hai Modi se (they are petrified of Modi),” Dubey declares without bothering to hide his glee.

So won't they vote en mass against Modi?

“Their votes will be split between (the Aam Aadmi Party's) Kejriwal and (the Congress's) Ajai Rai,” he declares with the assuredness that is a hallmark of every word about politics spoken in this heartland of India.

Not far from Nadesar in Varanasi, where Narendra Modi's roadshow today is to feature anything upwards of 100,000 people, Dubey points to adjacent statues of Mahatma Gandhi and Dr B R Ambedkar. While Bapu's sculpture is rather postmodern, Babasaheb's is the traditional statue.

“See, Mayawati made these statues,” Dubey says. “Her own caste's leader's statue is so nice. Gandhiji ko post-mortem (sic) bana diya. (But she made post-mortem of Gandhiji).”

The C word makes an appearance in almost every political conversation you might have in this city of Kabir and the Buddha (Sarnath, where the Buddha delivered his first sermon, is a pebble's flight away). At one point while highlighting his plight as a metaphor for UP's lack of development, Dubey says, “What can I do? I'm a Brahmin, I can't work for a Baniya. I know you're from Mumbai where these things don't matter, but here they do.”

While no one you speak to seems to have any doubts about Modi's victory from Varanasi, opinion is divided on who will finish second.

“The people of Varanasi are emotional people,” says a Sikh man who has lived in the city for decades. “Even if Modi wins with 1 lakh votes, there is a connection the people feel for Ajai Rai. At least he is getting his dues nationally. People are getting to know him.”

Why is everyone so sure that Modi will win handsomely? Didn't Murli Manohar Joshi barely scrape through with 17,000 votes in the 2009 Lok Sabha elections?

“Don't forget, Joshi was fighting against a Robin Hood of his constituency,” says a local journalist, referring to gangster-politician Mukhtar Ansari, who is not contesting this time to ensure anti-Modi votes are not split.

In a twist so bizarre it is perhaps only possible in UP, Ajai Rai (who was seen last night listening to sarod maestro Amjad Ali Khan perform) is said to be getting support from Ansari, who is alleged to have killed his cousin Krishnanand Rai.

“Winning votes for yourself is one thing boss,” says a man who says he is among the chosen 40 who will garland Modi when he lands in Varanasi today, “and directing votes to another candidate is another thing altogether.”

There are AAP caps visible in Varanasi, but there is also anger against Kejriwal and co.

“Arre, they are giving money to wear those caps,” says a panwallah in his 40s. “At a barber's shop they said they will give Rs 100 to wear the caps. The barber took the money, wore the cap for a moment, and threw it away.”

And at a journalists' bravado session at the end of the day, the consensus seems that the attack on the AAP's Somnath Bharti on Wednesday evening could have gotten a whole lot worse, had not local journalists intervened and saved Bharti.

Past midnight, as a drunk labourer couple totters through an empty Varanasi road, a few people having paan shout at them: “Arre, the good days are about to arrive (a reference to Modi's campaign line) and you are drunk?”

Image: A boy lights an earthen lamp on the steps of Sindhiya Ghat in Varanasi
Photograph: Jitendra Prakash/Reuters