Meet the man who shot Narendra Modi in 3D hologram 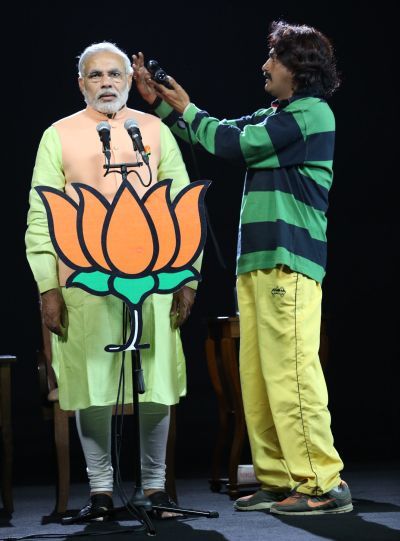 'He is a very colourful man with a great sense of style. I have not seen another politician that dresses so well.'

'He is so knowledgeable. He would talk to you about sports, technology, world affairs... there is no subject that he can't talk about.'

U K Senthil Kumar considers himself lucky that he could work with a "hard working and knowledgeable politician like Narendra Modi."

Many people may wonder what a cinematographer is doing with the Bharatiya Janata Party's prime ministerial candidate. Senthil shoots Modi's speeches using 3D holographic technology so that hundreds of thousands of people can see and hear the leader.

Senthil Kumar, who trained in holographic technology in London, first met Modi before the Gujarat assembly election in 2012.

The man who made the meeting possible was Hindi film director Mani Shankar who felt holographic technology could be used by political leaders to reach out to ever larger numbers of people, and that the one leader in India who would be open to using this technology was Narendra Modi.

"We felt Modi was one leader who was up to date in technology. He is educated and knowledgeable. That is why we thought of pitching the idea to him," says Senthil Kumar.

A meeting was arranged at Modi's home.

Senthil Kumar recalls he was floored the moment Modi walked in. "I had no idea what he was like in person. When I met him, I liked the way he carried himself," he says. "There was an aura about him; he looked like a divine personality."

"The way he dressed, the way he spoke, the way he walked -- everything about him impressed me. His body language was that of a leader, and he looked like a giant. He greeted each and every one of us personally and asked whether we were comfortable and had food. Only when he was assured that we had all eaten and were fine that he asked if we could get down to work."

The first time Modi saw Senthil Kumar, he called him a hippie because of his long and unruly hair; a nickname that stuck!

Mani Shankar and Senthil Kumar had erected a set to shoot a sample hologram speech. The set resembled a dais with a mike in the corner and a chair for Modi to sit. They asked him to walk on to the dais and sit on a chair, at which point a person was asked to come and garland him. He was then asked to approach the mike and start talking. He was asked to speak for a few minutes on the hologram.

Both Mani Shankar and Senthil Kumar were in for a surprise when Modi started talking about holograms. "What amazed us was the subject of his speech, He had spent time learning about holograms and spoke about the technology for about 25 minutes. After he spoke, we showed him what he said in hologram so that he could get an idea how it worked. He was happy and said we shall use it in the assembly election."

Once Modi liked what he saw, everything moved fast. The very next day, they met again and he was ready to shoot his speeches for the assembly election. Once again, they were in for a surprise. "He would talk for up to an hour-and-a-half without a break. Through this period, he used no notes or reference material. I realised then that he was a great orator, though I couldn't understand much of what he was saying due to my limited Hindi."

Shooting in hologram is different to shooting a film or a still image; the difference is in the way the image is lit. Senthil Kumar used a Cannon C 500 camera with 4K resolution to shoot the 3D hologram image of Modi.

"We had to make mathematical calculations and light the image accordingly so that his image looked natural, so that the viewers felt the 3D effect. It takes a minimum of six hours to light the image. Once the calculations are made and lights are placed correctly, shooting the video is like shooting any other object."

When Senthil Kumar learnt about this technology, his interest was piqued, and he set out for London to learn it well. After returning to India, the first time he used the technology was during the Gujarat assembly election with Modi.

Modi's hologram speeches during the Gujarat assembly election were broadcast at a hundred locations using satellites. So impressed was Modi with the technology that he wanted it used for the Lok Sabha election.

The shooting for the Lok Sabha election began in February, and by March, around 750 stages were created. "He was extremely busy criss-crossing the country. He would land for an hour or two in between his travels and shoot."

Once his speeches were shot, trucks with the screen and projector travelled to various parts of the country with 75 shows broadcast every three days!

Senthil Kumar is hugely impressed with the way Modi worked during the Lok Sabha election campaign. "He is such a hardworking person. After a day spent campaigning, he would take a flight to Gujarat to shoot his speeches. He was never a minute late for the shoots. I was extremely impressed by his punctuality."

He finds Modi's dress sense impeccable. "He is a very colourful man with a great sense of style. I have not seen another politician dress so well. He would have a choice of four or five sets of clothes for each shoot, and would ask me, 'Hey hippie, which one should I wear?' I would choose a colour that would suit the 3D hologram and he would wear that."

There were no political conversations between the leader and cinematographer. "I am far more impressed with him this time; as a politician, as a friend, as a leader and as a gentleman. He is so knowledgeable about so many things. He would talk to you about sports, technology, world affairs... there is no subject that he can't talk about."

If Modi becomes the prime minister? "India will be like the United States. You will see a total change in the country and the whole world will start admiring us. I am sure about it."

"He is a learned man," says Senthil Kumar, "and has the desire within him to do something for the country. Moreover, he doesn't have a family to steal money for. So far, he has worked for the welfare of the people of Gujarat. Now I think he will work for the whole of India."