'I chose the army over glamour,' says Major Sheena, who feels no other profession elicits the kind of respect like the army does. 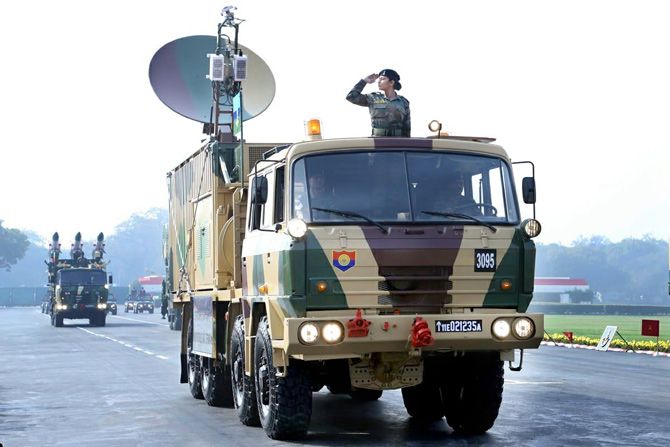 IMAGE: This Republic Day, Major Sheena Nayyar will be in command of the Transportable Satellite Vehicle in the parade on Rajpath. Photograph: AGDPI

Major Sheena Nayyar is one of those who have led the way.

In 2015, she was among the first four women Indian Army officers selected for the flag folding drill in the Beating Retreat ceremony that marks the end of the celebration of Republic Day.

That same year, she was part of the first ever all-women marching contingent in the Army Day parade.

This Republic Day, she will be in command of the Transportable Satellite Vehicle in the parade on Rajpath, saluting the President of India with the whole country in audience.

"The TSV provides on the move voice and data communication for army formations, it is rapidly deployable. Without communication you cannot fight a synchronised war," says the officer of the Indian Army's Corps of Signals who has served seven years in the army and hails from Amritsar.

"The 2015 women's marching contingent was a golden opportunity and marked a change in society. Practicing for the parade, holding a 4.2 kgs rifle was a lot of hard work, but we proved ourselves," Major Nayyar tells Archana Masih/Rediff.com.

"Since then it has had a cumulative, culminating effect. It is a satisfying change that in a male dominated organisation, women are considered at par with male counterparts," says the officer, the first in a business family to join the armed forces.

This year, another fellow Signals officer, Captain Tania Shergill, is the first woman adjutant at the Republic Day parade. Major Sheena is also an accomplished 10 metre air rifle shooter, attempting to win a spot in the national team and aims to represent India in the Paris Olympics in 2024.

It's a sport that she picked up over a year ago, but has evoked positive feedback from fellow competitors for having performed rather well. She cleared the western zonals and is looking forward to appearing in the national team selection trials.

"I practice shooting whenever I get time from my regular defence routine. My dream is to represent my nation in an international forum and want to be a part of Olympics 2024."

The Indian Army for her was the accomplishment of her father's unfinished dream.

"My father was just two when he lost his father. He had many responsibilities early on because of which he could not join the defence services, but he always took me to see the parade at the border. He used to tell me to wave at soldiers whenever we saw them passing by. He said soldiers see their families in us." After graduating in electronics and communication from Amritsar, she had got placements at TCS and Mahindra Satyam, and also cleared the Combined Defence Services exam.

In college, she had participated in modelling competitions and could have pursued that as well, but the call of the Indian Army was greater -- it was also her father's dream.

"I chose the army over glamour," says Major Sheena, who feels no other profession elicits the kind of respect like the army does. "When you meet people you can see it in their eyes, you can sense it. Apart from women officers there are so many unsung and unknown heroes that have been a driving force for the organisation. As women officers -- young girls try to emulate you -- you are a torch bearer for them."

"You feel empowered that you are setting an example, and doing something for a better India."

For the Republic Day parade, officers and men have been practicing every morning for the 90-minute grand spectacle. They are up at 3 am every day to prepare for the show. IMAGE: Sheena Nayyar with her parents Vandana and Vinod Nayyar at the passing out parade at the Officer's Training Academy in Chennai. Photograph: Kind courtesy Major Sheena Nayyar

Her parents, brother, sister, husband and in-laws will be watching her. She had seen her father's chest swell up with pride when she passed out of the Officer's Training Academy and can only imagine what he would feel to see her and hear his daughter's name being announced on Rajpath.

"She has given us so many moments of immense pride. It can't be put in words what it means to us to see her in uniform," says her mother Vandana Nayyar.

"We feel she has made our coming into this world worthwhile."