Will voters in Ernakulam take to the Communist MP who asked 447 more questions and took part in 162 more debates than your average MP?
Will Arun Jaitley's wish come true?
Krishna Prasad, the renowned journalist and Outlook magazine's former editor-in-chief, reports from Kochi. Drawing room chats on the state of Indian politics almost always end up in collective kvetching, before everyone drowns their miseries in a glass of hypocrisy -- and returns to forward the latest WhatsApp bile with their signature emoji.

'Wish we didn't have to choose the best from among the worst.'

'Wish our parties would stop treating voters like sheep.'

'Wish candidates competed on their performance, not puff.'

'Wish caste and community didn't have such a big role to play.'

But how do voters respond when they come face to face with their wishes, in a manner of speaking?

Kerala is India's most challenging state for pollsters, according to NDTV's Prannoy Roy.

Today it gets another chance to show how neurons are triggered in the heads of examinees when presented with a single, objective-type question in the privacy of their polling booth.

Is it logic that decides which button they should press on their EVMs -- or a tribal, herd-like instinct? 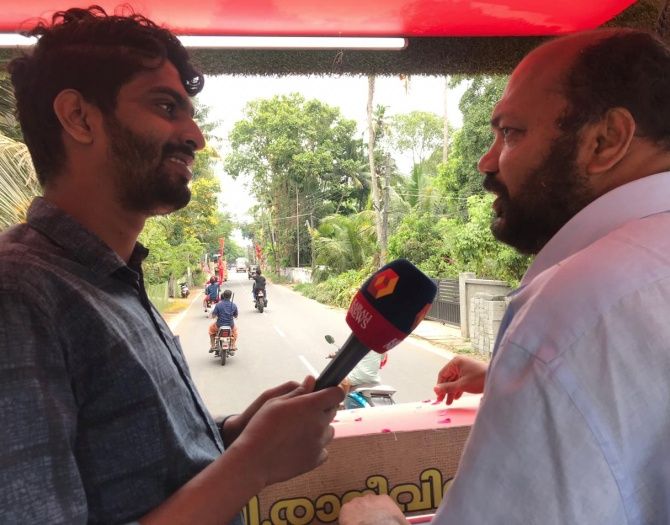 Ernakulam Lok Sabha constituency goes to the polling booths in the third phase of General Elections 2019 on Tuesday.

And as much as the parties are on test, so is the 'wise voter' and her intelligence quotient: IQ...

For, in the ring is P Rajeev.

When the godless Communist, 51, retired as a Rajya Sabha member four years ago, the Upper House of the 'temple of Indian democracy' was a sight to behold.

Naresh Gujral of the Shiromani Akali Dal, a BJP ally in the NDA, asked the Narendra Damodardas Modi government to nominate Rajeev because his party, the CPI-M, wouldn't give him a second term.

'What does 'P' in P Rajeev's name stand for?' asked quizmaster Derek O' Brien of the Trinamool Congress playfully, and provided the answer: 'Parliamentary.'

The Congress's Ghulam Nabi Azad offered to trade a new iPad for Rajeev's 'so that I wouldn't have to go through various books to find out which rule fits where.'

While the encomiums flowed, the artist Jogen Chowdhury, representing Trinamool, live-sketched his outgoing colleague on Rajya Sabha stationery, see below.

Finance Minister Arun Jaitley appealed to newly minted CPI-M General Secretary Sitaram Yechury to 'give full consideration to our desire to have Rajeev back in the House sooner or later.'

That moment is here.

Will voters in the seven assembly segments that make up the Ernakulam constituency take to the Sansad Ratna -- the parliamentarian who asked 447 more questions and took part in 162 more debates than your average MP? 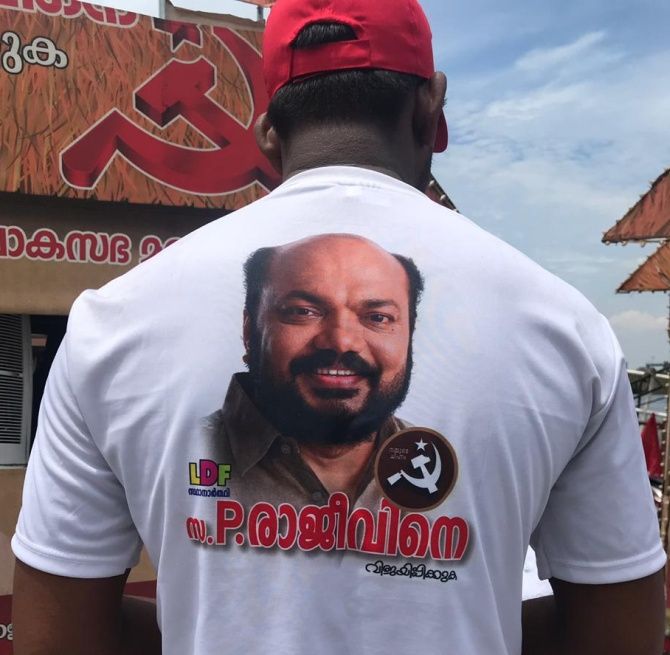 In any other part of the country, the easy answer to a question like that would be: who knows?

Not in Kerala, a state that eats, breathes and lives politics -- and news.

Here, the first TV channel they switch on in the morning is Asianet, not Aastha.

In homes and stores and restaurants, news is the ambient noise in the background all day, not 'Om Sai Ram'.

The Indian Readership Survey of 2017 showed that newspapers reach 59.73% of the people in the state, compared to the national average of 16.55%.

And they pay upwards of Rs 7 per day to keep themselves abreast, not some piddling 'invitation price'.

Rajeev himself is a journalist. Resident editor of the CPI-M mouthpiece Deshabhimani before he entered Parliament in 2009, he is now its chief editor.

He knows the pulse. But he also knows politics is not a zero-sum game.

In 16 of the 17 parliamentary elections previous to this one, Ernakulam has plumped for a Christian candidate.

Only once, in 1967, when Rajeev was a sparkle in his parents's eyes, has a non-Christian touched the tape first.

And, in the last seven elections, only twice has a non-Christian been runner-up..

In that sense, the weight of history is against Rajeev in 2019.

Outwardly, of course, the BJP slaps its thighs about not pandering to the minorities.

But it too has had to replace A N Radhakrishnan, whose voteshare went up 4.5% between 2009 and 2014, to bring in the former IAS officer turned politician, Union Minister Alphons Kannanthanam alias K J Alphons.

So, in India's first European colony, Kochi, that's another test for the aware, literate voter: Christian or not? Rajeev says Kochi should be seen as more than just a Latin Catholic bloc.

The Left has won in its name in Ernakulam only once, again in 1967, when Vishwanatha Menon triumphed. Every other time, it has backed Independents, always Christians.

Thrice, the journalist Sebastian Paul, who presented a media analysis programme on Kairali TV, has won with Left support.

In 2014, the LDF backed a novice Christian Independent candidate only to see its voteshare plummet by a whopping 13%

"LDF is as guilty as the UDF in playing the Christian card," says a CPI-M functionary. "Last time we had to introduce our candidate Christy Fernandez (an IAS officer under President Pratibha Patil) to our workers before we could introduce him to voters."

That might sound surprising given Ernakulam's high literacy rate. But Indian politics is never short of surprises.

A study by IPSW, a political start-up, shows that even in Ernakulam, India's second most literate district, 24,000 people do not know that Tuesday, April 23, is the date of elections.

With Rajeev, the Left doesn't have the problem of recognition it did five years ago.

He has lived in Ernakulam for 30 years, and cut his teeth in the Marxist trade union (CITU), in the industries and the shipyard, run a newspaper, been part of the political milieu.

From barbers to bank workers, from teachers to toddy-positive 'boltan', there is a lot of clenched fists and pumping of the air, and a lot of 'Inquilaab Zindabad'. Clearly, the LDF seemly hugely energised and organised, but who is to say?

Politically conscious Keralites are notoriously inscrutable, and no one would know that better than Rajeev as he takes a catnap before hitting the road one last time. He sounds confident but what if blood turns out to be thicker than water?

In 2009, a letter reportedly sent by a local archbishop to Congress President Sonia Gandhi recommending Hibi Eden for the Ernakulam Lok Sabha seat stirred up a wave of protest in the political class as well as church circles.

In other words, Hibi Eden, 37, has been in the Congress's line of vision for a decade or more. He is said to have Rahul Gandhi's ear.

And like the Congress president has a youthful face and is telegenic.

Can Ernakulam overlook the look? 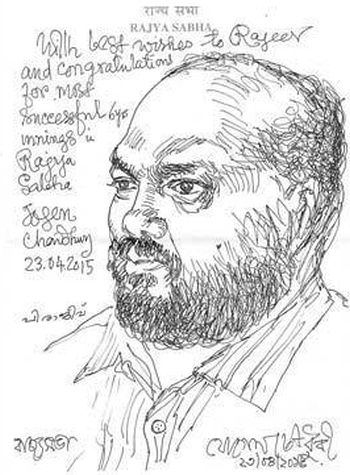 The final test in Ernakulam is of the voter's understanding of what an MP's duties and responsibilities are.

After all, an MP is a lawmaker, the big picture guy, not a Corporator to get your nala cleaned.

These vegetables and fruits are then auctioned to raise funds for the campaign.

But Rajeev realises that there are two mountains to climb. One, retrieve the Left's lost ground in Ernakulam. And two, to expand the Left's base by bowling to a new set of voters.

By one estimation, there are 150,000 first-time eligible voters in each Lok Sabha constituency in 2019.

Their number is higher than the winning margin in 297 seats in 2014. Rajeev has therefore turned to social media with a vengeance.

Surprisingly, for a Left leader or unsurprisingly because this the Left in Kerala, Rajeev has a heavy presence in the digital space.

His Facebook page has over 150,000 followers. He has his own Web site (prajeev.org) with pictures of him hugging the young and old.

There he is meeting a child suffering from cerebral palsy.

There he is receiving accolades from workers of Cochin Ship Yard for speaking up for PSUs in Parliament.

There he is with old students of Maharajas College. There he is holding a tennis racquet.

It might look like late realisation from the Left, but what if you were told that the Students Federation of India, under P Rajeev, was among the first in the world if not the first, to get its own Web site?

So, among all the questions before Ernakulam's voters, there is the big one: what if?