'Legal industry has lost its hero'

'It was amazing to see the grasp he had over the law and the sharp mind that he possessed.' 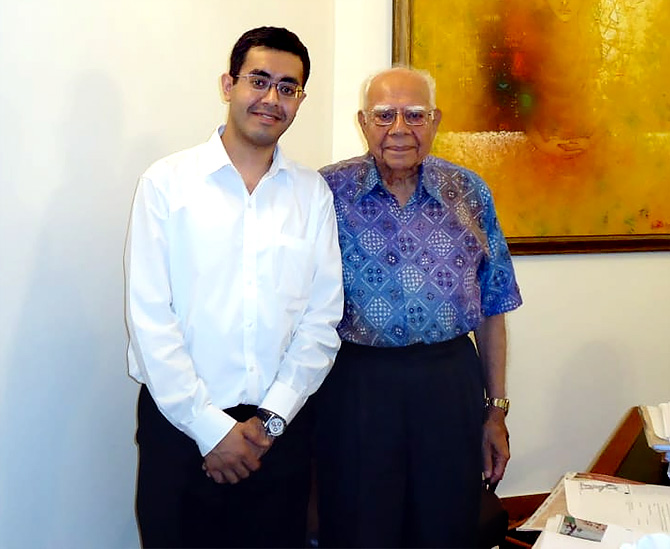 Debanshu Khettry was so excited that morning that he set out from home early for the office that would be his school for the next two months.

He was 35 minutes before time -- his watch showed that it was five minutes shy of 9 am -- as he stepped into the law office.

There was no one there.

As the young, still-studying-to-be-a-lawyer intern looked around nervously -- at that moment, even the fact that he would soon be a fourth generation lawyer was not helping one bit -- a not very tall, bespectacled, bushy-browed, balding gentleman, looking very much like a affable grandfather -- walked out from an inner room.

"This was in 2009 or 2010. Ram Jethmalani Sir was very welcoming, very warm," 30-year-old Khettry's reminiscent smile travels down the phone from Delhi to Mumbai.

The next two months were crammed with learning experiences.

"It was amazing to see the grasp he had over the law and the sharp mind that he possessed. "He was an octogenarian, but, let's say there is a hearing tomorrow, he would come and ask for five-six cases and even give their citation numbers," Khettry tells Savera R Someshwar/Rediff.com.

"Legal cases are reported in legal journals and he would give the volume number and the page numbers of multiple cases in one go to his clerk."

Though Jethmalani was "such a huge legal luminary," Khettry was amazed at how the doors to his office and home at Delhi's Akbar Road were always open and how approachable he was.

"That's the kind of person he was, very cordial and very helpful. You would never feel that he is a big guy; any person could approach him. We saw that in his practice too.

"Yes, his fees were high; he was one of the highest paid lawyers, I would say. But there are so many cases that he has fought absolutely free of cost. How would that be possible if he was not approachable?

"During my internship, I saw people who could afford his fees approach him and he would always give them time. That is something that really impressed me."

Time, though, had begun to take its toll on this fierce legal eagle. The passing years had made him frailer.

"Definitely, even when we used to intern with him, age had caught up. At times, he would be unwell. But, in terms of legal acumen, he was sharp as ever."

Jethmalani's ill-health didn't prevent him from keeping an open house.

"In the evening, any lawyer could just come and visit him. Or they could stop by for food and drinks," says Khettry.

Jethmalani was generous with his interns too.

"You could always sit in his chamber and he would involve you in the conferences with the clients. Itna kuch seekhne ko mila unse, itna kuch dekha... (We learnt so much from him).

"I must have about 15 internships, but this one was the most enriching. And the most inspirational.

"At that age, he would be the first person to enter his office..."

He was caring of his clients, says Khettry. At the same time, "he never misled them or gave them false hope.

"Hamesha ek practical approach batate the (His approach was very practical). He would clearly share his views about what he felt would happen."

In the crowded corridors of overworked courtrooms, says Khettry, Jethmalani was a respected star.

"You could see the respect in the eyes of the judges when he stood up to argue or question a witness.

"Normally, when lawyers argue, they have to stand. But the judges would say, 'It's okay, you can sit down and argue'.

"That's the stature he had in court."

Even when he was not an intern, if Kettry knew Jethmalani would be in court, he would make it a point to go and watch the senior lawyer.

"The corridors of the courts are really crowded. But when he would come, the lawyers would make way for him. That action speaks a lot about the respect he commanded in the legal fraternity."

His biggest learning, says Khettry, who now works with the New Delhi-based Leslie and Khettry, came from watching Jethmalani prepare for a case.

"The diligence with which he did it was amazing. You learnt exactly what to argue, where to hit," says Khettry, who has been practising corporate law for the last six years. "He practised criminal law, but the detail and depth he would go to while preparing for a case is something that I try and follow in my practice as well.

Normally, says Khettry, lawyers don't get into the "nitty-gritty, which they should."

"Getting into greater details to find out the truth, or to help the court, is something that I learnt while watching him."

Kettry says he also made it a point to read the judgments of the cases in which Jethmalani was involved. "I wanted to understand the kind of arguments he was making. The kind of depth he got into was commendable.

"Unless you really get into the case, what you are doing (as a lawyer) can be superfluous. You could be fighting (a case) for fighting's sake or doing it because you have been paid; but that doesn't really do justice (to the client). And that's something else I learnt from him."

Khettry greatly admired how his senior always kept to the point. "His points would be very accurate. I would see no frivolous point."

Even in client conferences, says Khettry, if clients pressed him to argue a frivolous point, he would refuse. "'What are you saying?' he would retort. 'It does not make sense.'"

And that, Khettry says, is another important Jethmalani lesson. "Don't mislead a client or agree with what he is saying because he is paying you."

Recalling the most unforgettable Jethmalani characteristic, Khettry says, "When people reach the stature he did, they can become slightly haughty or their nature can change. He didn't.

"He was a maverick, but he was also a hero. With his passing, the legal industry has lost its hero." 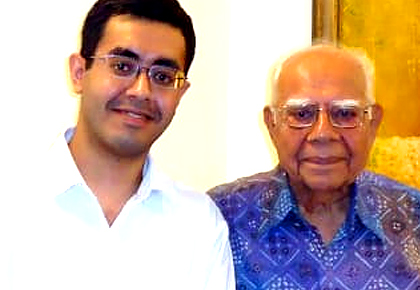