'Kishori Amonkar was a slave to the purity of the note'

'At her last concert on March 26, she bowed down to the artistes and to the audience and said, "Main chahti hoon ki baar baar koi na koi is stage mein bulayein aur main gaati rahoon." But that was not to be.' As the 74-year-old Padma Shri awardee -- besides her work at the Kala Kendra, she is a choreographer (she studied dance from Pandit Shambhu Maharaj and Pandit Birju Maharaj, music from Ustad Amjad Ali Khan and Pandit Biswajit Roy Chowdhury, and theatre under Ebrahim Alkazi), photographer, costume designer and member of the Sahitya Kala Parishad and the National Culture Fund -- dialled the home of her "good friend", she could only see the "yawing void" that Kishori Amonkar's death has left in the world of music.

She pulled out the hundreds of photographs that she had shot of the legend over the years and the many CDs she has recorded of her performances.

"I think I must have been the only one who she allowed to photograph her so extensively during a concert and make recordings of her singing. I've got 100-odd CDs just out of our collection."

Out of the mists of time came the memories of how she first met Amonkar, many, many years ago.

"Our institution, the Bharatiya Kala Kendra, was doing a workshop on Kishori Amonkar, and it was packed with students."

When it ended, Sumitra Charat Ram, Singh's mother -- the founder of the Bharatiya Kala Kendra -- asked her daughter to give the vote of thanks.

"I was quite nervous because I had heard she was very terrifying. But she was so charming, so, so affectionate." Thus began a 35-year association between a musical genius and a lover of music.

"You know, she is a wonderful person, not hard to deal with if you understand her. I have actually seen her just playing the tanpura behind (the late) Mallikarjun Mansur (the legendary singer of the Jaipur-Atrauli gharana, to which Amonkar also belonged)."

Singh takes on one of the perennial complaints against Amonkar, that she was always late for her performances.

"If she was late going on the stage, it was not because she wanted to be late; it was because she had to retune her saaz (instrument), the surmandal. It has 36 strings and each one of them had to be retuned."

"Right through the concert, she uses those strings to make sure she is on the right note," Singh recalled.

"Her conscience actually does not permit her to go on stage with the strings not being properly tuned. Her music was so, so important to her."

However long it took, Amonkar would not begin her performance, or move on to the next one, unless she was satisfied.

"She was a slave to the purity of the note. Once she left the hotel and reached the auditorium, there was obviously a change in temperature that required the strings to be retuned," Singh remembered.

"She could probably go onstage without doing that and the audience would not know the difference. But she did not want to begin her performance until she was satisfied that everything was correct. Many times, people mistook that for her wanting them to wait."

For Amonkar, says Singh, it did not matter.

What mattered was her devotion to the utmost perfection she could give her music. 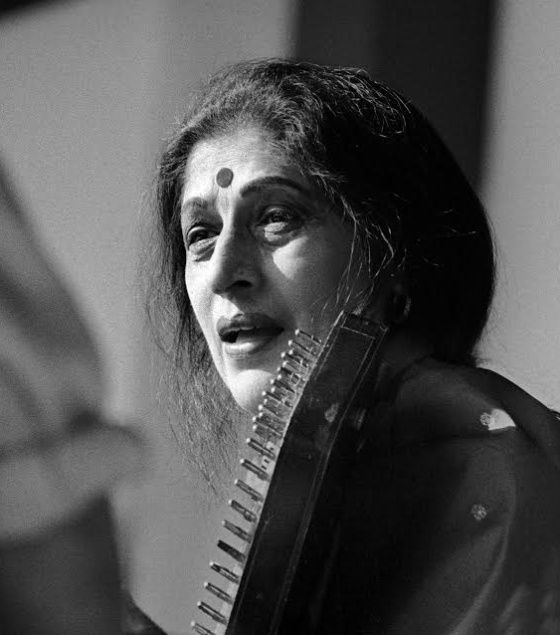 She would always take a break after singing the first raga, says Singh.

"It is not good concert planning, but she needed to return to the green room and retune the strings for the next raga that she was going to sing."

Once, Singh recalls of one such break when Amonkar -- who was 10 years older than her -- was performing at the FICCI auditorium in Delhi, it began raining heavily outside.

"She turned to me and said, 'Shobha, abhi kya karoon (What should I do now)'?"

"She loved the idea... and the audience loved it too."

"Once, we were in the green room of Delhi's Kamani auditorium -- it was another packed concert, there was not an inch of space for people to sit or stand -- and she asked, 'Shobha, which is the east of Kamani?'"

"I didn't know, so I told her, 'Kishoriji, just consider that your audience is your east'."

"She thought it was a very good idea and I quickly took her up on the stage." Singh had the rare privilege of recording Amonkar's performances and shooting her photographs in concert.

It was not a privilege that Amonkar allowed everyone.

"During her last concert, which was held on March 26, someone in the audience had come with a camera on which a large lens had been mounted."

"But she never said that to me. She never stopped me from photographing her very, very closely. Or recording her music. Most musicians are very, very finicky about it..."

"It delighted me because this was Kishori Amonkar, whose music I adored. Her music is a treasure. And I am grateful for the great repository I have with me. What she did for me was like giving away your wealth."

"It was just last year that I said, 'Kishoriji, I want to release your music,' and she said 'Shobha, tum kar nahi sakogi. Ek ek recording ke liye tumhe itna paisa dena hai (you won't be able to do it. Each recording will cost you so much money)'."

"So, you know, I just stopped thinking about it. Besides, you don't think someone is going to leave you so, so fast." Over the years, says Singh (above), she learnt about Amonkar's likes and dislikes.

"For example, right through the concert, she likes to have a hot cup of tea. I always kept that in a thermos behind her."

As a performer, Amonkar expected her audience to respect her music.

Like most classical musicians, it would upset her if people walked out of the auditorium in the middle of her performance.

"She thought that was very, very rude."

"Once, when this happened, she stopped singing and said, 'You people think it is rude of me to come late. But it is much more rude of you to get up in the middle of a raga. You can wait until the raga is over and I am tuning, then you can go'."

There is a smile in Singh's voice as she recalls another incident.

"She was singing for my mother's 80th birthday celebration. All musicians and dancers do not like alcohol to be served when they are performing. Kishoriji noticed a glass of Coke in someone's hand and thought it was whiskey. And she really took off at that point."

But, says Singh, it was always easy to calm her down if you knew how.

"You had to divert her mind. She's like a child, you know. Pure." 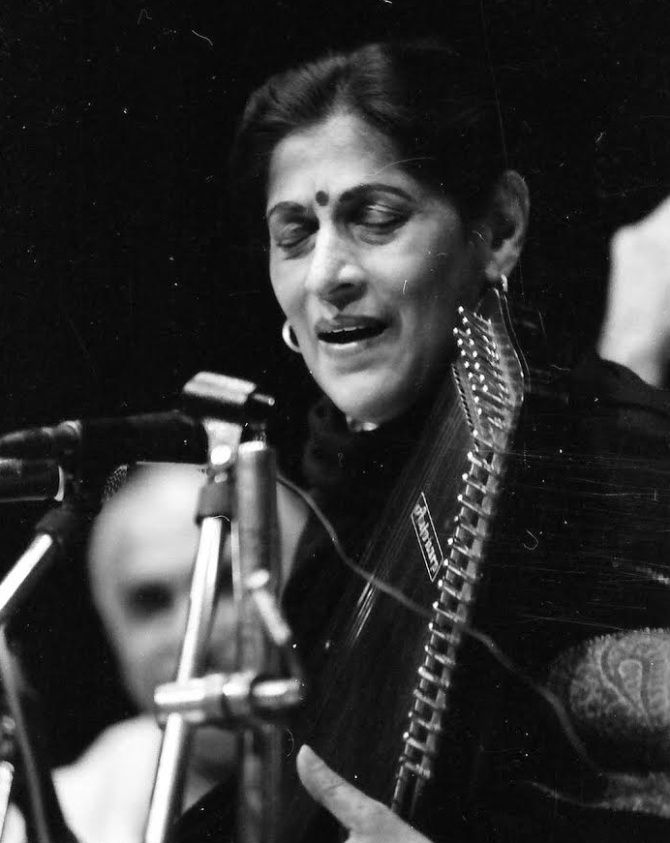 A few years ago, Amonkar was felicitated by the Bharatiya Kala Kendra.

During her speech, says Singh, Amonkar mentioned an incident that revealed the extent of her devotion to her music.

"She said that, one month, she had got eight or nine concerts and her mother (the equally legendary Mogubai Kurdikar, who was also her guru) was very, very upset. 'Listen,' her mother told her, 'If you are going to take nine concerts, that means you have not more than two or three days between concerts and that time will be taken in going to the venue and returning home by train, so when are you going to do your riyaaz?'"

"That's when she realised that she had to give not more than four concerts in a month."

Kishori Amonkar's final concert was held on March 26, a week before she passed away, at the Kamani auditorium at Delhi's Mandi House -- "the biggest auditorium in the country."

As is her wont, she asked the audience's permission for a 10-minute break after the first raga so that she could retune her surmandal for the next raga.

"She did a small puja in the green room as well," recalls Singh.

"I would always tell her, 'Kishoriji, don't give an interval after the first raga.' But she always did." 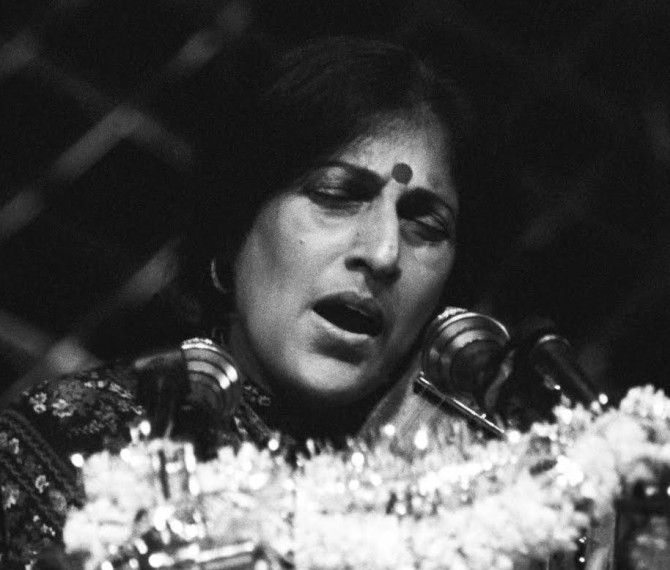 Amonkar returned to the stage 40 minutes later, but not a single person in the audience was missing.

"No one left," says Singh, recalling that amazing moment.

"Not even one. She was such an amazing singer. Once she began, it was like you were hearing something out of this world... the music... for which people were willing to wait."

"After the concert was over, the audience gave her a standing ovation."

"She bowed down to the artistes and to her audience and said, 'Main chahti hoon ki baar baar koi na koi is stage mein bulayein aur main gaati rahoon (I wish people keep inviting me on stage and I continue singing)'."