I kept thinking 'hope they don't do an encounter on us'

'The police are meant to protect and safeguard society.'
'When the protector divides us on the basis of religion, whom do you trust?' 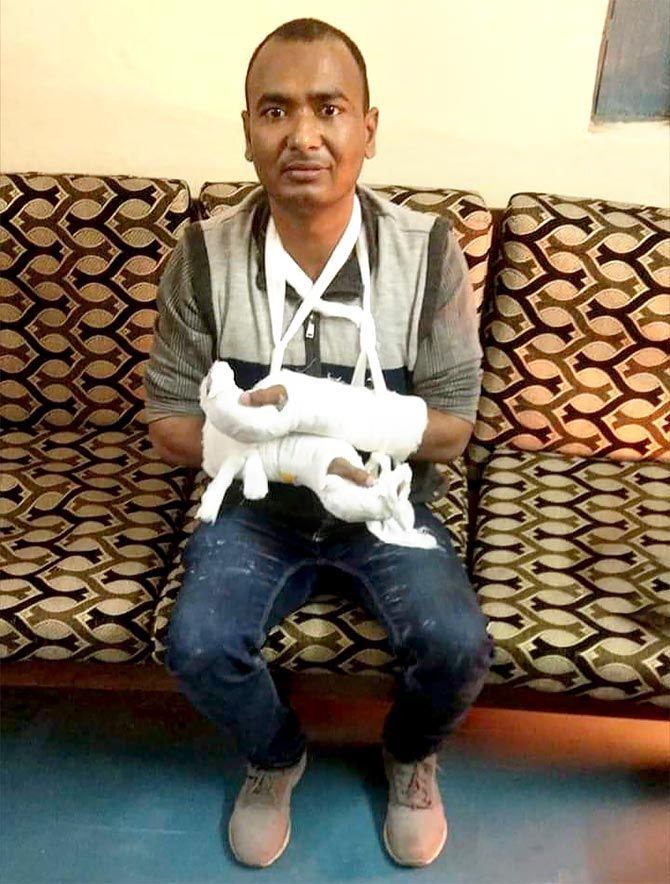 IMAGE: Mohammed Mustafa, 26, a student of Jamia Milia University, was injured during the lathi-charge by policemen on December 15, 2019. Photograph: Kind courtesy, Mohammed Mustafa

On December 15, Mohammed Mustafa, an MBA student and IAS aspirant from Jamia Milia Islamia University, was among the students who were dragged out of the university library and lathi-charged by policemen.

In a conversation with Rediff.com's Divya Nair, the 26 year old recounts the ordeal he faced for a protest he says he didn't participate in or volunteer for.

My family is from West Champaran in Bihar. My forefathers lived in Gopalganj, also in Bihar.

In 2010, after completing class 10, I left my village to finish high school at Aligarh Muslim University.

I graduated in commerce from AMU and went on to complete my MBA from Jamia Milia Islamia University, Delhi, specialising in international business.

I've always wanted to serve the country, so I decided to appear for the Union Public Service Commission examination and become an IAS officer.

In 2018, I took up MA (social exclusion and inclusive policy) alongside preparing for the UPSC.

I stay in the college hostel.

Every day, I would enter college at 9 am and after attending classes, spend time studying in the library till midnight so I could complete the vast portion.

On Sunday (December 15, 2019, the day of the police lathi-charge), despite being a holiday (the university is closed till January 5 for vacation) I reached college at 9 am.

The library is open on Sundays, so as usual, I went inside and started studying.

At 5 pm, I heard some commotion outside.

A few students suddenly came inside the library and locked the doors from inside.

I saw a few paramilitary personnel, including CRPF personnel, open the doors by force; they came charging at us.

They didn't ask any questions or investigate. Without any provocation, they started hitting us.

There were some 20 to 30 students in the library, including girls.

Two policemen dragged me out and first hit me on my head. I kept asking them what I had done.

After the first blow, I instinctively lifted my hands to cover my head and face.

They continuously hit my elbows with batons until I could bear no more. The pain was unbearable. I pleaded them to stop, else I would die.

The distance from the old library to Gate no 7 is only 500 metres, but they kept beating us non-stop.

I heard one of them say: "Mar jaane do, koi farak nahi padta (let hiim die, it doesn't matter)."

They said: "kalma padh lo (say your prayers)" as if we were about to die.

I was unconscious after some time. When I woke up, they were still beating me.

Then another said: "Sar pe mat maaro, mar jayega, neeche maaro (don't hit on the head, he may die, hit him below)."

At 7 pm, 17 of us were taken to the New Friends Colony police station in Delhi.

Most of us were badly injured and couldn't move. It was freezing inside.

We were made to sit on the floor. No FIR or case was registered.

We kept asking "On what charges have you detained us?" They didn't give us any answer.

The officers who communicated with us either had their name tags concealed or did not wear them deliberately, maybe so we cannot complain about them later.

I had also lost my phone in the process, so couldn't inform anyone.

They didn't allow us to speak to anyone or make an urgent phone call home.

We could hear some of them talk that Supreme Court lawyer Colin Gonsalves tried to help us (students), but they (police) didn't let us communicate to anyone, forget seeking basic legal help.

I kept pleading with them to at least take us to a hospital, call an ambulance or allow us some medical help. But they were really rude and said: "Aisi ladaai me ek do mar bhi gaye to kuch nahi hoga. Chup chaap baitho (in this battle even if someone dies it won't matter, shut up)."

At 2 am -- nearly 9 hours after the assault and seven hours after we were unlawfully detained -- we were taken to AIIMS trauma centre (in Delhi) where we were given first aid.

Fortunately, there were no major head injuries. But I have been diagnosed with metacarpal fracture.

Both my arms are plastered. I cannot lift anything heavy and have to rest for at least six weeks to heal.

At 6 am, we were all taken back to the police station. I was told that Amulya Patnaik, Delhi police commissioner, had intervened and ordered us to be sent home.

It has been less than 12 hours since we were sent home, but I still don't have an explanation as to why I was detained at the police station.

I have been a disciplined student all through my life. I did not actively participate in this or any protest.

My fundamental rights were violated. I was denied timely medical treatment. I have a family back home who is worried about my safety.

The police are meant to protect and safeguard society. When the protector divides us on the basis of religion, whom do you trust?

I have always believed in democracy and equal rights for all citizens.

I have read about the Citizenship Amendment Bill. It isolates a particular community, yet I personally feel that the aggrieved should get justice. Those who have the relevant documents should get what they deserve.

But yesterday's incident has eroded my confidence in the police. During those painful hours I spent at the police station, I was scared and kept thinking: "kahin le jake encounter na kar de (hope they don't kill us in an encounter)."

I am scared to step out or go back to my hostel now. These are very disturbing and embarrassing times for us.

History is proof that religious intolerance does not benefit anyone.

Politicians have always used religion to please vote banks. But the lawmakers and enforcers should know the difference and not mix politics with educational institutions. It destroys the social fabric of our democracy.

The paramilitary forces were so careful, they even turned off the lights to avoid being caught under an enquiry, if ever there will be one. But I am sure some CCTV would have captured their brutality.

Some day the truth of this dark episode will come out and justice will be done.