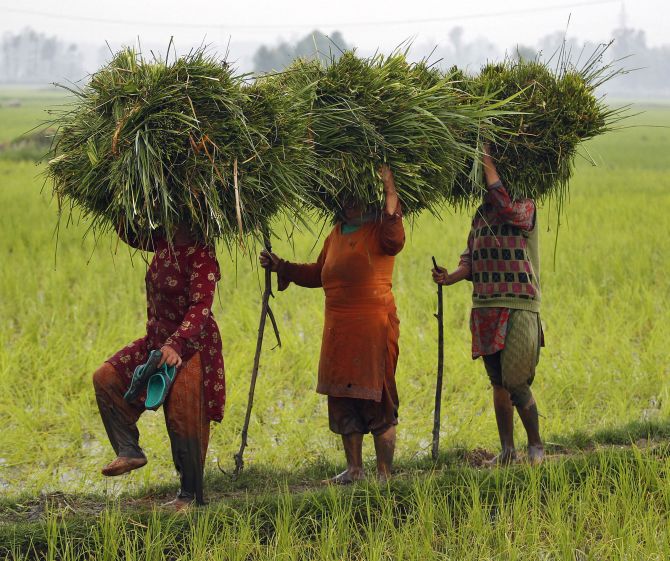 Jairam Ramesh on the rationale for the 2013 land Act that he piloted as rural development minister and what is wrong with the amendments that the Modi government is trying to push.

The Right to Fair Compensation and Transparency in Land Acquisition, Rehabilitation and Resettlement (Amendment) Bill, 2015, which has been tabled in Parliament, seeks major amendments in the LARR Act, 2013.

The architect of the 2013 Act was then rural development minister Jairam Ramesh, who headed the United Progressive Alliance government's efforts to put India's land acquisition policy in place. The efforts were historic because the exercise was replaced the Land Acquisition Act of 1894, enacted by the British.

Even though the law was changed after almost 120 years it was found wanting. In just two years' time, many amendments are being sought in it by the Bharatiya Janata Party-led National Democratic Alliance government.

The crux of the matter is that India has not been able to fix its land policy in a way which can satisfy most people and be seen as fair and just. To add to the complexities of the serious issue, the Narendra Modi sarkar brought in amendments through the ordinance route.

The main stakeholders -- landowners, farmers and people whose livelihood depends on land -- are aghast. How can the government change the most important land policy without debate and spring a surprise by opting for the ordinance route?

Jairam Ramesh gave Rediff.com the background of how the entire exercise to change the 1894 law was carried out and what kinds of efforts went into it.

Here are his views as told to Sheela Bhatt/Rediff.com:

On the framework of the 2013 land bill

The bill was put up in the public domain. Two all-party meetings were held. I met BJP leaders -- Sushma Swaraj, Rajnath Singh, Arun Jaitley -- individually. I gave written responses to the suggestions they made. Leaders of 14 political parties were taken into confidence.

Normally, a bill is passed by one House, then it goes to the next House and then it becomes the law. After passing the bill on September 4, I took the bill back to the Lok Sabha on September 5 and it was passed.

Now you know so much of democratic processes were followed, there was pressure on me from certain people who said why not bring an ordinance? I said no, we will follow a democratic route. I was being attacked by activist Medha Patkar saying that the bill is not progressive enough; I was being attacked by the Indian industry associations saying that the bill is restrictive.

The government held no consultations, no discussion, no attempt to reach out to the Opposition. I am not here even talking of the substance of the ordinance, that is a completely different issue. I am talking the manner in which these changes are forced on us. The process of the ordinance I think has been high-handed.

On the substance of the new amendments to the 2013 law

The substance of the ordinance is what I think is even more dangerous and the more substantive issue as far as we are concerned. 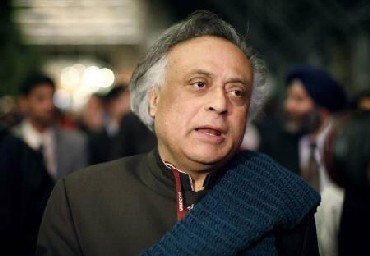 The UPA took into account a lot of things while making the law.

What is the reality in our country? You acquire land for one purpose and you give it for some other purpose. We have seen this.

So the Social Impact Assessment was to keep a check on the diversion of land, to ensure that excess land is not acquired by anybody, to ensure that multi-crop irrigated land is acquired only as the last resort and also to identify the livelihood losers and not just landowners.

Compensation is also being provided to the livelihood losers. So that is one big issue.

Under the new law moved by the NDA now private hospitals and private education institutions can acquire land for these private guys who run for profit. I see no reason why they should be defined as infrastructure.

We had said five years after the land acquisition, you should return the land if it is not developed. It is a reasonable time frame.

If you want to make something, make it in five years, ten years, we can debate on it. But to make it unlimited, which is what has happened now, I think is completely unfair to the farmers.

There is an urgency clause in the 2013 Act. That urgency clause takes care of national security and defence installations. You can acquire the land without the consent or without doing Social Impact Assessment.

Now to say that this 2013 law is anti-national and that Pakistan would know what we are doing is a completely bogus argument, frankly speaking.

So lakhs of farmers, whose lands were acquired under the 1894 Act who had taken the compensation and who were entitled to compensation under the new law under certain conditions, will get disinherited.

The crux of the matter

The fundamental premise of the 2013 Act was there will be no forcible land acquisition. No law is 100 per cent perfect. You always give and take on the basis of operating experience. You can say this is what we found and we need to change.

I had said in Parliament when we were piloting this bill that if there are some operating difficulties, we can always, whichever the government, can examine it.

But our point is without giving a chance to this Act to operate in practice, suddenly the government has come up with amendments. I don't want to ascribe any motive to anybody, but I do feel that this is about land acquisition, not for buying of land.

If a private institution, private hospital or private parties want land, they can go in the open market and buy it! Why use the government to acquire the land for you?

I believe in faster industrialisation, we need deeper industrialisation, urbanisation, all that is fine. I don't think patriotism and commitment of industry is a monopoly of either Modi or Jaitley or Nitin Gadkari, we are all a part of it. However the point is how do you bring about a balance?

Instead of addressing the valid question they have gone for force. The route for forcible land acquisition has been reopened. In our law of 2013 in government projects a Social Impact Assessment is required, but no consent of the landowner is required for government infrastructure projects.

The Social Impact Assessment is the way of convincing the local community that land is being acquired for a public purpose, that excess land is not being acquired, it is an exercise of outreach and communication.

We are a democracy, we must learn to take people into confidence!

The government is taking a unilateral approach. I am not blaming anybody, but this is the mindset -- that the government must have the power to acquire any land at any point of time. That mindset must go.

I accepted that criticism. That 13 laws, coal, highway, railways etc were exempted. It didn't require consent of the landowners. But special economic zones were removed from the list. In law SEZs requires both consent and Social Impact Assessment.

We exempted 13 laws from Social Impact Assessment and consent, but did not exempt them from compensation and R&R. So we had to bring in those changes within one year. That was the compromise I made. Any government is a collective entity, so naturally the railway minister and the highway minister were heard too.

Unfortunately, (the NDA's rural development minister) Gopinath Munde passed away. Munde was on record as having said he would not do anything to tamper with this 2013 law because it was the BJP that was its strongest and most enthusiastic supporter in Parliament.

The BJP brought two amendments. One was to allow for leasing of the land which was provided.

The other was dealing with windfall profits. That if there was a windfall profit it would be shared with the original owner. This was Sushma Swaraj and Arun Jaitely's amendment that we put it in. Under the law you can do acquisition of land, purchase and you can also lease the land. 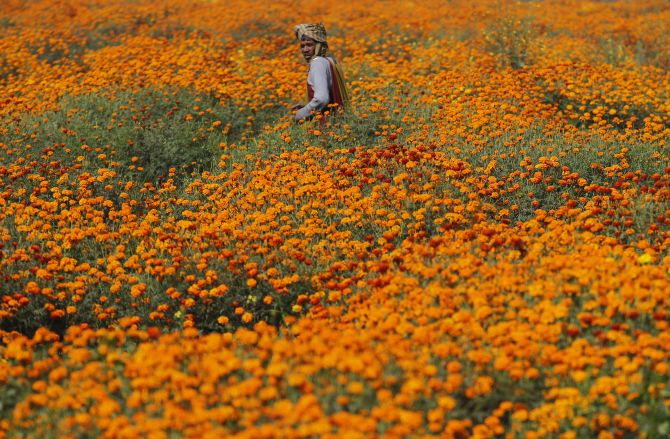 His objections to the new amendments

I have substantive objections in terms of the provisions and I have objections about the manner of approaching the bill.

I said okay, I will disagree with you, that is why we put 80 per cent consent for private and 70 per cent for PPP. Jaitley wants to do away with consent and Social Impact Assessment completely in certain categories of land acquisition.

Also, we should know that all governments are sitting on thousands of acres of land. I have seen land acquired 30, 40 years ago and nothing has happened on it. You have gone and acquired 100 acres, 1,000 acres and not even using it.

See, we are a land deficit country. We are a land hungry country. BJP MP Chandan Mitra made a beautiful speech when the bill was being debated. He said how land is social security. He quoted from the movie Do Bigha Zameen, he quoted Rabindranath Tagore.

Now, the same Chandan Mitra's party is taking a different view. The NDA should be bit realistic on this matter.

On allegations that he messed up the bill in 2013

If I messed up the bill, then why did Sushmaji and Rajnathji not raise it in Parliament? Dr Manmohan Singh brought about the consensus. He set up a Group of Ministers under Sharad Pawar's chairmanship. That GoM debated all these issues. Anand Sharma wrote a letter -- his recommendations were incorporated in the bill.

In the UPA you had different points of view. You had no unanimity, but you had consensus. There is difference between unanimous and consensus. The 2013 law was consensus.

Ultimately the government of the day has its way, but let everybody have their say. Anybody who has an alternative point of view is being termed anti-national.

If the government's ordinance becomes an Act we are on the return road to 1894.

The 2014 Act, if passed, will have all the undue power to acquire land without any consultative process, without any give and take, without Social Impact Assessment.

On the Congress view

There will be different points of view and there are ways of handling different points of view. The prime minister has said in Parliament that samvad hona chahiye, to samvad keejiye, na! Samvad ka matlab ye nahi hai ki aap kaan band keejiye aur kaho ki aap bolte jao bolte jao. Aur agar koi aapko pasand nahi hai to aap kahenge ki aap rashtravaadi nahi hain, ye desh ke suraksha ke khilaaf hai. (The prime minister told Parliament that there should be dialogue, then debate, please. It doesn't mean that you shut your ears and ask others to speak. If you don't like someone, you say you are not patriotic, this is against national security.) This is not the right approach.

I had said then that I hope 20 years from now, we don't require any land acquisition law. I had said so that ultimately if someone wants to go and buy land in this country let them buy it from the open market. But today it is not possible.

The state of land markets, state of land titles, land mafias, asymmetry of power between the buyer and seller of land, it is unrealistic to expect that for infrastructure projects people can buy land from the open market.

When we were in power, this is what the BJP used to tell us. There is discontent, there is disquiet and I think the government should move in a careful manner and take various people into consideration, take people on board, not smear people and call their patriotic credentials into question. This is not the way.

Don't listen to the Congress; listen to some of your own voices within the BJP. Listen to Cabinet ministers.

Now it for the government to decide.

As told to Sheela Bhatt/Rediff.com