'Around 10 pm, a senior police officer from the Hazratganj police station came and started abusing me with the choicest words...'
'He said he will ensure that I rot in jail all my life.'
'This police officer then told a lady constable to slap me.'
'She did that, but he was not happy with the force of the slap.'
'He got up, pulled me by my hair and hit me in my stomach and knees.'
'He was abusing me as a bastard non-stop.' 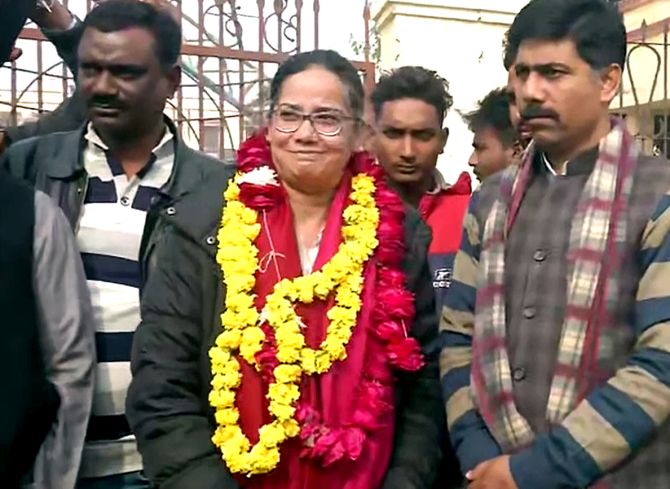 IMAGE: Social activist Sadaf Jafar after her release from Lucknow jail on January 7, 2020. She was arrested by the Lucknow police on December 19, 2019, for participating in an anti-CAA protest in Lucknow. Photograph: ANI Photo

Actress, Congresswoman and activist Sadaf Jafar was arrested by the Lucknow police on December 19 for protesting against the Citizenship (Amendment) Act and National Register of Citizens.

On January 4, she was granted bail by the court, but it was another three days before she was finally discharged.

In the intervening 18 days, Jafar says she was brutalised in the lock-up by the Lucknow police, denied sanitary napkin for her periods, starved of food and water.

"India is Modi and Yogi and if you are against them you are against your country -- that was the equation that I faced in the lockup," Jafar, who has acted in Mira Nair's series A Suitable Boy, tells Syed Firdaus Ashraf/Rediff.com.

Here she recalls the nightmare she endured in police custody, in her own words.

On December 19, we were around 3,000 people who came out to protest against the CAA and the NRC at Parivartan Chowk, Lucknow.

The Lucknow police were there and they were okay with our presence. We were protesting peacefully for more than one hour. The police did not disturb us as they did not see any threat from our side.

If we were of any threat, they would have arrested right there, but they did not do that.

After one hour, all of a sudden stone-pelting started from the other side by men wearing kafiyah (the Arabic head scarf) and Muslim skull caps.

It looked like everything was staged because all of them were wearing the same kind of clothes and were acting in uniformity. They appeared to be disguised in Muslim attire.

Now Section 144 had been imposed around our protest and there was a strong police presence. In such a scenario, how come these disguised Muslims landed up with bricks in huge numbers at the protest site at Parivartan Chowk?

How could these men reach that spot without being noticed at any of the police barricades?

Why did the police not stop them and arrest them rather than allowing them to come to our protest site?

If you see my Facebook Live video of that time, you will find in it that I am questioning the police as to why they are not catching those people who are throwing stones.

I was filming constantly. There was arson and motorbikes of media-persons were burnt.

Then, all of a sudden, the police detained me. I asked them, why are you arresting me and not those disguised Muslims who are throwing stones?

They didn't listen to me and took me to the corner of the protest site and started beating me. Women police beat me on my legs brutally. From the corner of my eye I could see a Dalit activist getting beaten up brutally.

Soon, around 10 peaceful protestors along with me were encircled by the police. There was a cameraman who was asked to move away.

They built a police wall around me and told us to sit. I told the police that I could not sit on the ground because I had a problem in my leg.

A policeman slapped me and my spectacles fell down on the ground. When I bent to pick up my spectacles, all the 10 peaceful protestors who were encircled by the police were beaten brutally by them.

Strangely, none of the policemen beating us were wearing name badges on their uniform. They were behaving like (Uttar Pradesh Chief Minister) Yogi Adityanath's (personal) goondas.

The only name of a police constable I heard was Selam as her bike was burnt and the police were talking about this incident.

But the really scary part of my life had just begun. Around 4 pm, I was put in a police jeep and taken to an all-women police station in Hazratganj.

And there I was beaten the whole night. They were beating me non-stop and abusing me left and right.

Selam, the policewoman, kept slapping me non-stop, pulled my hair and dragged me to the ground. I was the only woman protestor whom they had got hold of.

These policewomen kept calling me names. Apart from the physical trauma I went through, I also went through emotional trauma.

Because of my Muslim name I was being called a Pakistani by these women constables. They kept saying, 'Khaatey yahaan ki ho aur bajatey wahan ki ho (you eat in India and praise Pakistan). Humney tumko itna diya hai aur kya nahi karte ho tumlog yahaan par (What have we not provided you with and still why you are all so ungrateful?).

They were constantly saying that I must go to Pakistan and also said I get money from the ISI (to speak against India).

Constantly they were dehumanising me. They were constantly insulting my dignity as an Indian Muslim citizen.

For the first time in my life I felt what it means to be a Muslim in Amit Shah's India.

In Amit Shah's home ministry, the way he is handling things, it is harrowing to be a Muslim in today's India.

It was like 'we people and you people' in the police lockup. That was very traumatising for me. I had read and heard about communal remarks against Muslims, but this was the first time I was facing it.

When it started getting darker I started panicking. I am a single mother and got worried about my children.

It was my right as a mother to inform my children where I was. I wanted to make a phone call to them, but they had taken my phone away. My children didn't know where I was.

Whether I was in a mortuary, hospital or which police station, they had no idea.

Around 10 pm, a senior police officer from the Hazratganj police station came and started abusing me with the choicest words. He asked me how much did I know about the Citizenship (Amendment) Bill.

He later told his colleagues that I must be charged under IPC section 302 (murder) and section 307 (attempt to murder). This officer said he will ensure that I rot in jail all my life.

I realised that I was suffering because my name was Sadaf Jafar.

This police officer then told a lady constable to slap me in front of him. She did that, but he was not happy with the force of the slap.

He got up, pulled me by my hair and hit me in my stomach and knees. He was abusing me as a bastard non-stop. There were no name badges on his uniform or the lady constable.

I fell down. Then I was sent back to the lockup.

A lot of people were hunting for me in different police stations in Lucknow to find out where I was. People came to the Hazratganj police station, but were turned away. I was right there rotting inside its lockup.

My blood pressure shot up in the middle of the night. They took me to the civil hospital around 2 am.

I was denied water and food till that time. From 4 pm, the time of my arrest, till 2 am the next morning I was hungry and thirsty.

When I reached the hospital I said I wanted women doctors to examine me, but they denied me that. A male doctor checked me and sent me back.

When I reached the lockup, my periods began. They did not give me a sanitary napkin. I started bleeding, I kept bleeding, but no help came.

The next morning, around 11 am, my friend Deepak Kabir, a social activist, came looking for me. I was so full of remorse as soon as he entered my room. I knew he would be arrested. His phone was snatched away immediately. He was badly beaten and bruised.

I have been booked under 80 different sections of the IPC for acts like arson and whatnot.

They had all these different IPC sections written on a piece of paper and the police just started adding names as accused as per their whims and fancies.

On December 20, 2019, I was not even produced in court, but directly sent to judicial remand and to Lucknow jail.

For more than 24 hours I did not get water and food. Worse, they did not provide me with a sanitary napkin. I was soaked in blood due to menstrual bleeding.

In jail at least I was taken care of because they were following the normal routine. From December 20, 2019, to January 7, 2020, my situation was better than that one night I spent in the lockup at the Hazratganj police station.

Till December 21, my family had no idea where I was. Because of that video my family and friends came to know I was detained. Had I not shot that video, I would have disappeared.

The police claim they didn't take me away, but in the video I am telling the police, 'Why are you arresting me?' That is proof.

I still believe Indian secularism cannot ever be over. This government may be in a majority, but their mindset is in a complete minority.

There are so many people out there who have nothing to do with their hate ideology.

The social fabric, which was weaved by our Constitution makers, still stands very strong. It is not a fantasy.