'It was my duty to shoot the enemy, and I don't regret it' 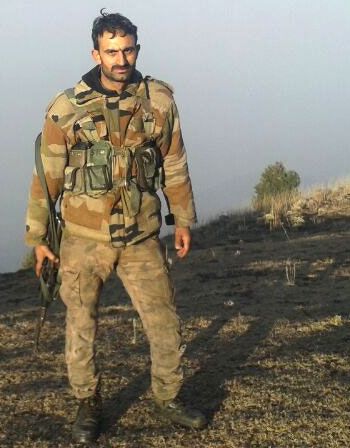 His WhatsApp message posted 48 days ago read: 'It was my duty to shoot the enemy, and I don't regret it. My regrets are for the people I could not save: Soldiers, buddies, innocents, etc.'

He leaves behind a pregnant wife and a three-year-old son.

Archana Masih/Rediff.com speaks to the family of this brave son of India.

Head Constable Sanjewan Singh's phone rang when he was being flown in a helicopter to a military hospital.

He had taken a bullet fighting along with Colonel M N Rai, in an encounter with terrorists in Jammu and Kashmir. His pregnant wife, Manju Devi, was on the line.

The bleeding policeman asked the man accompanying him to answer the phone. "I think he knew he wasn't going to make it," says his brother Harish Singh, narrating what must have been the last moments of his brother's life.

"That is why he told that man to ask my bhabhi how she would return from her mother's home on her own. He knew he would not survive and she would have to come for the last rites," adds Harish Singh, over the telephone from his home in Khelani village, Doda, J&K.

Colonel Rai and Head Constable Singh, who had conducted similar operations in the past, were martyred when the two terrorists opened fire after conveying to the colonel's group that they wanted to surrender. Harish Singh says his brother shot at the two terrorists even though he was shot in the leg.

As a veteran of the J&K Police's Special Operations Group, that has played an important role in fighting terrorism along with the Indian Army in the state, Sanjewan Singh had served 11 years with the Indian Reserve Police in J&K -- nine of those with the SOG.

"His wife worried about him serving in those areas. He would put his hand on his son's head and say 'I swear by him, no terrorist can kill 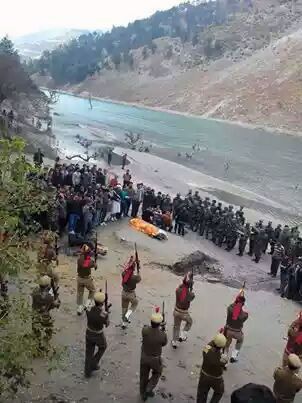 me'," remembers Harish Singh who has taken leave from his posting in Punjab to be with the family in its hour of grief.

Image: Farewell to a Martyr: The last rites for Head Constable Sanjewan Singh in his village in Doda district. Photograph courtesy, The Singh family

A tough trooper, trained in commando warfare, Sanjewan Singh's father, Dharam Singh, is a retired school teacher in Khelani. He says his son never discussed what he did and on those few days when he came home on leave, he was busy with work either on his phone or laptop. He had won medals in his line of duty, say family members.

The day of the encounter, he had spoken to his son on the phone at around 12.30 pm. He later found out that an encounter was on and tried calling his son, but the phone was switched off.

Harish Singh was alerted by a friend about the Tral encounter. Knowing that his brother was the only one from the village to be serving in the area, Harish Singh tried calling Sanjewan Singh. He too got the same message that the phone was switched off.

Head Constable Sanjewan Singh was last seen active on WhatsApp at 12.27 pm, says his brother. His status message posted 48 days ago read: 'It was my duty to shoot the enemy, and I don't regret it. My regrets are for the people I could not save: soldiers, buddies, innocents, etc.'

It was over the 7.30 evening news on the radio that Dharam Singh and his wife heard about their son's death.

"I can't put into words my chot (pain), my zakhm (wound). It is unbearable," says Dharam Singh.

"To us, he was a simple police constable, but I was told by his unit that he was nirbheek (fearless). He was brave. We came to know about his courage only after his death," says the retired school teacher. 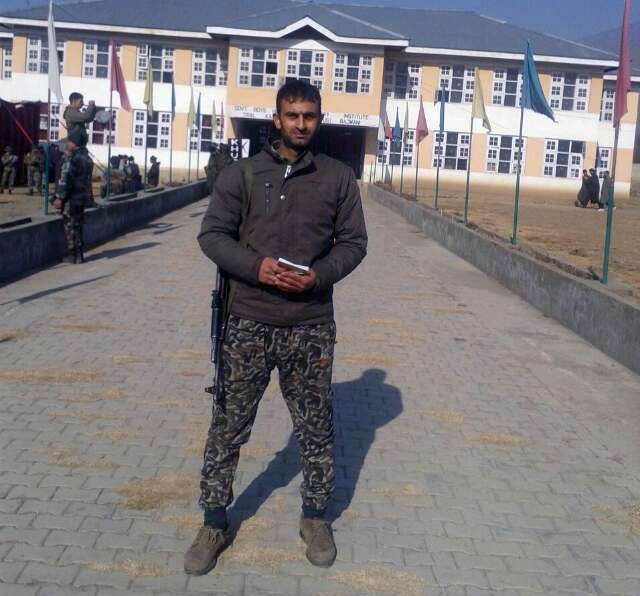 The next morning, his son came wrapped in the national flag and he was given a guard of honour. Senior district officials, personnel from the army and police and villagers were present at the cremation by the Chenab river.

In two days time it is Shaheed Sanjeevan Singh's 13th day ceremony. "He served his country well, but I don't think many people outside the state know about his sacrifice," says his brother.

The family is deeply upset that that no action has been taken against the father of the terrorist who told the security forces that the terrorists wanted to surrender.

"He is a head constable in the J&K Police," says the martyr's cousin Chandradeep Singh. "Shouldn't action be taken against those who betrayed the martyrs?"