The Chinese air force is now a 400,000 person force that flies some 2,000 combat aircraft -- more than thrice the size of the Indian Air Force.
Ajai Shukla reports.

When Mao Zedong declared the founding of the People's Republic of China in Beijing on October 1, 1949, the country had just 17 military aircraft. Legend has it that this little fleet -- nine fighters, two bombers, three carriers, one communication plane and two trainers -- overflew Tiananmen Square twice each to give the jubilant masses the impression they had an air force.

The next month, on November 11, 1949, Mao proclaimed the People's Liberation Army (Air Force) as a separate service.

On November 11, a PLA (AF) video, released to celebrate its 70th anniversary, boasted a range of sophisticated warplanes, most developed in China. These include the fifth-generation J-20 stealth fighter that has begun entering service, the J-16 Shenyang fighter (an advanced version of the Sukhoi-30), the H-6N strategic bomber, which reputedly launches the aircraft carrier killer Dongfeng-21D ballistic missile, the Y-20 transport aircraft that takes aloft 66 tonnes of payload, and the KJ-2000 airborne early warning system.

The 1962 Sino-Indian war was fought entirely between land troops, with neither side using its air force or navy against each other. But in a military face-off today, the PLA's ungracefully-named military doctrine of 'limited war under conditions of Informationisation' (gobbledygook for a digitally-enabled, highly transparent battlefield) will see a major role for the PLA (AF), operating in numbers from the 10-odd air bases that experts assess have been readied in Tibet. It is, therefore, worth retracing the PLA(AF)'s journey.

The year after its humble beginnings in 1949, the PLA (AF) got a major boost from the Korean War, when Josef Stalin and Mao reached an unholy bargain: Russia would bulk up the PLA (AF) with the mass-produced, highly-capable MiG-15, and train Chinese pilots and technicians to fly and maintain combat aircraft.

In return, China would serve as a Russian proxy against the United Nations coalition in Korea, especially the United States air force.

Between 1950 and 1953, both sides lost hundreds of fighters and pilots, including dozens of Russian pilots flying in North Korean uniforms. The experience garnered enabled Russia to incrementally develop the MiG-15 into the MiG-17, MiG-19 and the legendary MiG-21; with China eventually building all four fighters under licence.

The USAF, meanwhile, improved the supersonic F-86 Sabre fighters into an advanced version that Washington later supplied to Pakistan, which used them against the IAF in 1965 and 1971.

According to accounts from that time, when Stalin complained about China's reluctance to engage the USAF in air combat more aggressively, Mao expressed his readiness to get a million Chinese killed in combat in Korea, but he would not endanger the existence of his new air force.

It is important to note that China's shiny new air force has had very limited combat experience since the Korean War.

Analysts, including those at the USAF-linked RAND corporation, assess that despite the PLA (AF)'s instructional regime, which seeks to train pilots under 'actual combat conditions', it is ill-prepared to fight and win against well-drilled air forces such as the USAF.

After the Korean war, the PLA (AF) entered a period of steep decline caused by the Sino-Soviet split and by the internal turmoil of the Great Leap Forward and the Cultural Revolution.

After Mao's death, Deng Xiaoping began reforming the PLA; Communist party insiders have said he engineered the abortive 1979 invasion of Vietnam only to illustrate the PLA's deficiencies and need for reform.

The PLA (AF) also learned lessons from Britain's invasion of the Falklands and Israel's destruction of Syrian air defence systems in Lebanon's Bekaa valley in 1982. Deng realised the importance of air power and space assets. He allowed the PLA (AF), hitherto focused on supporting the land campaign, to begin developing an independent strategy. 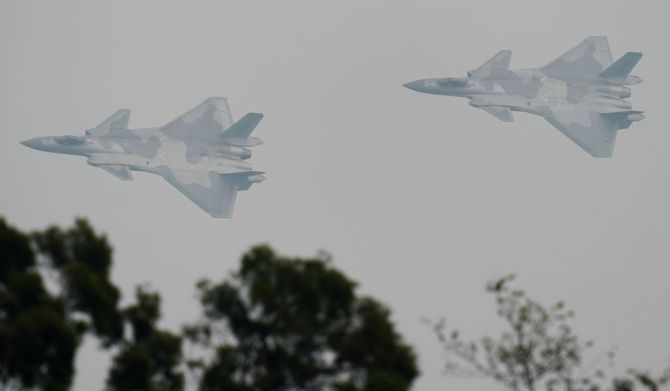 The dazzling success of the US 'AirLand Battle' doctrine in the first Gulf War in 1991 caused the PLA to adopt the doctrine of 'limited war under high-tech conditions', which envisioned wars being prosecuted by relatively small, flexible, heavily armed, tri-service troops.

The White Paper of 2004 adopted the current doctrine of 'Limited war under conditions of informationisation', which envisioned real-time advanced communications to digitally integrate land, sea, air and space sensors, and the use of precision munitions to accurately strike the targets thus identified.

Given this doctrinal backdrop, what role would the PLA (AF) play, and what missions would it perform, in a future war with India? These would be limited by a geographical imperative -- the Tibetan Plateau, which consists of a 1,000 TO 2,000 kilometre buffer between the Chinese and Indian mainlands.

PLA (AF) aircraft, operating from Chengdu and Kunming in south China -- the mainland bases closest to India -- would have a one-way journey of 1,000 kilometres to enter the Assam plains. Even with mid-air refuelling, that would leave the aircraft with little mission time, especially for targets deeper inside India.

Consequently, the PLA (AF) would have to operate from Tibet, for which it has created and stocked at least several air bases, including Lhasa, Golmud, Nyingchi and Shigatse. But while these are significantly closer to Indian targets (Lhasa is less than 400 kilometres from Tezpur) PLA (AF) fighters taking off from air bases on the 10,000-feet-high Tibetan plateau would face serious limitations on the weapons and fuel payload they can get aloft with.

To overcome this, they would require mid-air refuelling after take-off, a cumbersome process carried out at high altitude, during which they would be easily detected by Indian radar, providing IAF fighters, air defence guns and missile systems ample time to react.

To degrade the IAF's response time and capability, the PLA would very likely begin the war with cruise and ballistic missile strikes on Indian air bases in Assam, such as Tezpur, Bagdogra and Hashimara, using conventional-tipped missiles from the PLA's so-called Second Artillery -- an arsenal of strategic missiles with either conventional or nuclear warheads.

This might be preceded, or accompanied, by a carefully directed cyber-attack to disable the IAF's surveillance network, satellite communications and command and control systems.

Given China's demonstrated capability to target and destroy satellites in space, Indian communications and surveillance satellites would be fair game. A high-technology, broad-spectrum attack of this nature would not just be intended to clear the path for PLA (AF) fighter strikes in support of a ground offensive.

Given that Beijing would stage-manage any attack on India as a global demonstration and warning of its Great Power military capabilities -- the philosophy of 'killing the monkey to scare the chickens' -- a full-spectrum attack is a near certainty.

In the 1950s, the Red Army's legendary Marshal Zhu De had famously said, 'The kind of war we will fight depends upon what kind of arms we have.' That is now history.

New China's aggressive doctrine now is: 'Build the weapons to fight the war that we have to fight.' It is this attitude and the capabilities it has spawned that India's military must diligently prepare for.

As recently as 1999, facing the prospect of a war in Kargil, then Indian Army chief General Ved Prakash Malik was bravely echoing Marshal Zhu.

It would be worth recalling the famous comment of French Marshal Pierre Bosquet after he witnessed the suicidal Charge of the Light Brigade in 1854 in Crimea: 'C'est magnifique, mais ce n'est pas la guerre (It is magnificent, but it is not war)'.