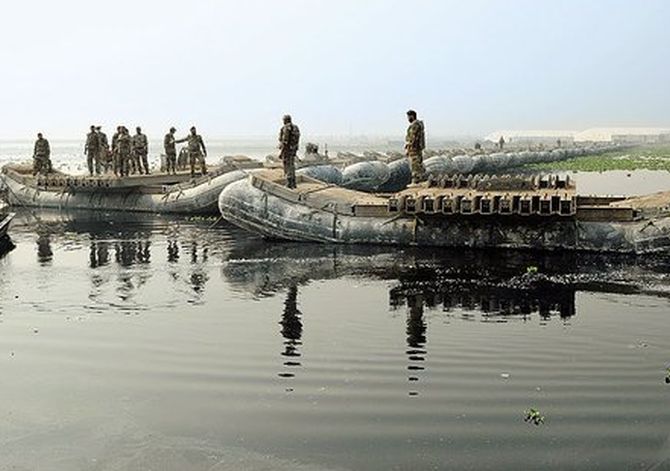 'Does the government help ordinary citizens like you and me with our marriages, birthdays and anniversaries?'
Rashme Sehgal reports on the controversy over the the Art Of Living Foundation's plans for a cultural festival on the Yamuna floodplains.

President Pranab Mukherjee has decided not to give the valedictory address at the Art of Living Foundation's three-day World Culture Festival cultural extravaganza.

No reason was given for his withdrawal but the President was clearly expressing his reservations at the controversy over the organisers using a large swathe of the Yamuna river's floodplains to hold the festival.

The President's is one amongst a chorus of protests by environmentalists protesting what they say is irreparable damage being done with the levelling of around 1,000 acres of land and the construction of the world's largest stage whose dimensions are around 1,200 feet long x 200 feet wide x 40 feet feet high.

Over three million people are expected to participate in the festival (March 11-13). Prime Minister Narendra Modi is expected to inaugurate the event and hundreds of cultural artistes from around the world will participate.

Art Of Living founder Sri Sri Ravi Shankar has tried to defuse the criticism by stating that his organisation is proceeding in an eco-friendly manner and 'had not cut a single tree.' Sri Sri Ravishankar further spoke about how 100,000 AOL volunteers had been releasing eco-enzymes into the Yamuna to improve the river's water quality and the improvement could be gauged from the fact that water buffaloes, which had shunned the river in the past, had now come back to it.

"A very bad precedent has been set by granting Art Of Living permission. Sri Sri Ravi Shankar is talking about using enzymes, but I would like to ask him have these enzymes been tested by any scientific body for their efficacy," asks Professor A K Gosain, a water expert at IIT-Delhi.

"Did he involve the Central Board of Pollution Control in this scheme or did he ask its permission before releasing these enzymes?" Professor Gosain asks, adding, "A one-time intervention can hardly be expected to clean the river."

"The entire bio-diversity of this coastal plain has been destroyed," the professor declares, "with the huge amount of levelling that was done there. He (Sri Sri Ravishankar) talks about not leaving a single piece of debris behind after the event, but fails to keep in mind that around the world, cities are implementing plans to free their floodplains from all construction activities including levelling as key step to prevent flooding."

India, Professor Gosain regrets, has not learnt anything from four major environmental disasters in the last decade caused by heavy encroachments of the rivers' floodplains. "This happened in Chennai, Srinagar, Uttarakhand and Mumbai. The loss to the nation ran into crores of rupees and yet we are now hell bent on repeating the same story in Delhi right under the nose of the central government," he warns.

"The floodplain acquifer is a huge underground lake and on an average, the 50 km long Yamuna floodplain can supply 250 million cubic metres of water each year which could meet the needs of three million people in the city," says Professor Vikram Soni, emeritus professor of physics and ecological wisdom at both the Jawaharlal Nehru University and Jamia Millia Islamia University.

"The 1,000 acres that will be impacted by the Art Of Living event has the potential of giving a sustainable supply of over one million cubic metres of water a year," he says. "At the rate of tanker water, it translates into water worth Rs 20 crore (Rs 200 million) per year."

"There is a clear collusion between Art Of Living and the DDA (Delhi Development Authority)" alleges Anand Arya, a senior ornithologist. "The first application for this event was moved in February 2015. Surprisingly, the DDA asked for no blueprint and none was provided. The DDA refused to give permission in February 2015, so Art Of Living moved a fresh application for permission in November 2015."

"This time too," says Arya, "permission was refused, but then obviously under pressure from the political masters, the DDA capitulated."

While DDA allotted around 60 acres, the Uttar Pradesh irrigation department allotted the remaining 37 acres. Despite being given 97 acres to stage the event, Art Of Living pamphlets state its festival is spread over 1,000 acres.

Arya believes the damage of the floodplains extends to over 2,000 acres.

"There is a game plan to develop this entire area for real estate," fears Arya. "We already know what happened in the case of the Akshardham temple where a vast stretch of floodplains was given over for the construction of a temple during the Vajpayee regime. Something similar could be afoot here."

"Our prime minister has no understanding of natural and riverine resources," says water activist Manoj Mishra who filed the public interest petition to disallow the Art Of Living event before the National Green Tribunal.

"Look what he has done with the Sabarmati river in Ahmedabad. The Aam Aadmi Party government should have adopted a much more cautionary and pro-green approach. Delhi Environment Minister Kapil Mishra is a member of the Art Of Living reception committee," Mishra points put.

Mishra and other activists are horrified that the cost of the entire event is being borne by the central and state governments. Pontoon bridges connect the capital with the event. One of these pontoon bridges has been built at the cost of Rs 4 crore (Rs 40 million) by the UP Public Works Department. A K Gupta, the PWD engineer in chief, said the UP government agreed to construct the bridge on a request from the central government.

"Does the government have a policy to help ordinary citizens like you and me with our marriages, birthdays and anniversaries?" asks Mishra. "Many of us run NGOs. Is there any policy to help any of us? Art Of Living has made a refundable deposit of Rs 15 lakh (Rs 1.5 million) for the entire event. The rest of the money running into several crores is being spent by different branches of government."

The National Green Tribunal has spoken about imposing a fine of Rs 120 crore (Rs 1.2 billion) on Art Of Living to compensate for damages.

"What does Art Of Living do? They sell meditation, they sell yoga and they sell products like any other commercial organisation," says Anand Arya. "They have excellent marketing and PR people. But that is hardly claim enough to have different government agencies bending backwards to work for you." 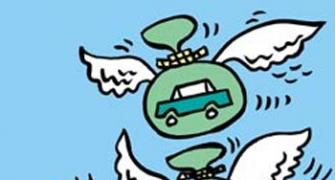 Financial planning tips for the salaried in their 20s A year on, no one knows who killed Prabha Arun Kumar