INS Viraat: End of an era

The Indian Navy's flagship carrier, the INS Viraat will be decommissioned on Monday, March 6, after serving the nation for 30 glorious years.
Rediff.com's Prasanna D Zore spoke with Captain Puneet Chadha, the INS Viraat's current and last commanding officer about the historic warship. 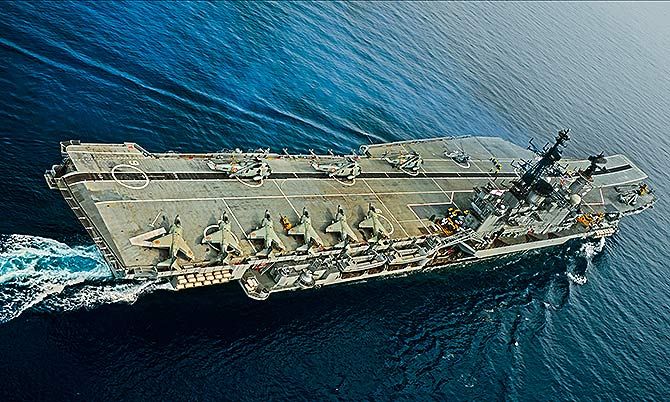 Before viewing the video interview with Captain Chadha and hearing what Vice Admiral Girish Luthra -- Flag Officer Commanding-in-Chief, Western Naval Command, who also served on the aircraft carrier -- said, a brief history of the INS Viraat: 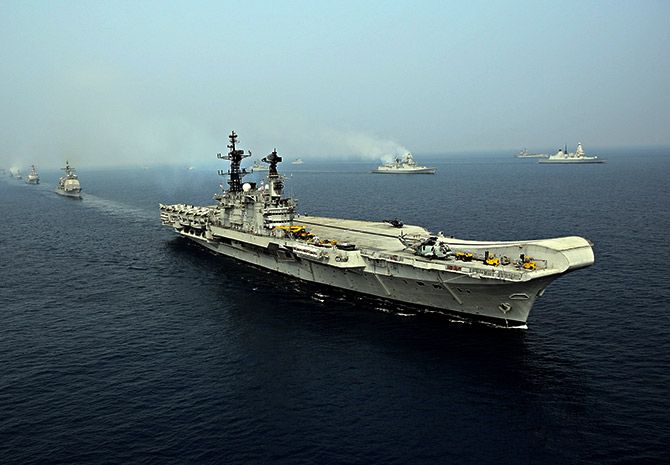 The INS Viraat was commissioned into the Indian Navy on May 12, 1987 after it served the Royal British Navy as the HMS Hermes since November 18, 1959.

"The construction of this ship began during the second World War (her keel was laid down on June 21, 1944)," Vice Admiral Luthra told a media briefing on board the ship on February 27.

The INS Viraat's motto -- Jalamev Yasya, Balmev Tasya (One Who Controls the Sea is All Powerful), a maxim first adopted by Chhattrapati Shivaji in the 17th century -- remains true even in the 21st century as its military strategy helped India secure its maritime boundaries.

"Because of the Viraat, with the Sea Harrier aircraft and Sea King helicopters complimenting it, whenever she moved with other ships, she could exercise complete control over the area in which she was deployed. This resulted in keeping our nation's maritime boundaries safe and this has contributed to India's safety and security," Captain Puneet Chadha told Rediff.com (Pleae see video below where he speaks about the INS Viraat).

The air light helicopters Dhruv and the Russian twin rotor Kamov-31 have also operated on board the ship, he said.

This is what Vice Admiral Luthra said about the INS Viraat's proudest moment: 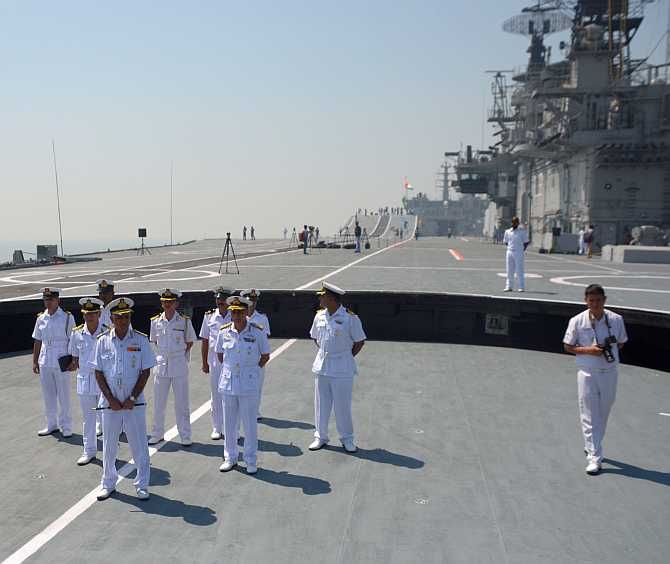 "She can carry 30 fighter aircraft as well as Sea King helicopters, called 'Flying Frigates' as they can take action against submarines as well as surface ships," he added.

"This ship also had Barak anti missile defence system for its self defence." 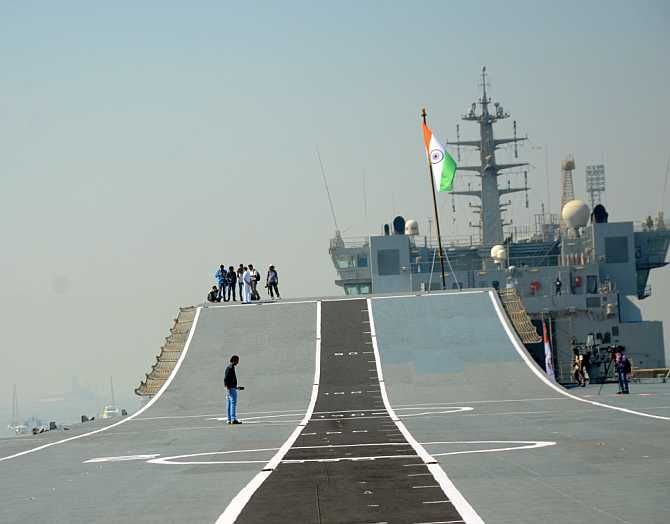 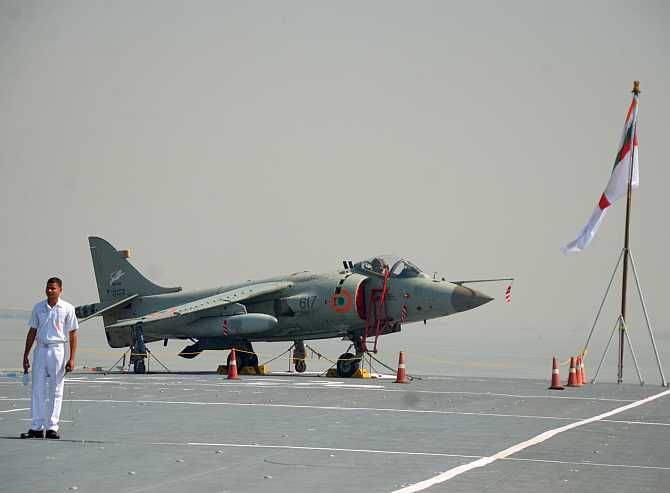 The Viraat played a role in Operation Jupiter in 1989 during the Indian Peace Keeping Operation in Sri Lanka, after which she was affiliated with the Indian Army's Garhwal Rifles and Scouts in 1990.

Her major participation was seen during Operation Parakram in 2001-2002 where India and Pakistan were engaged in a standoff after the terrorist attack on Parliament on December 13, 2001. 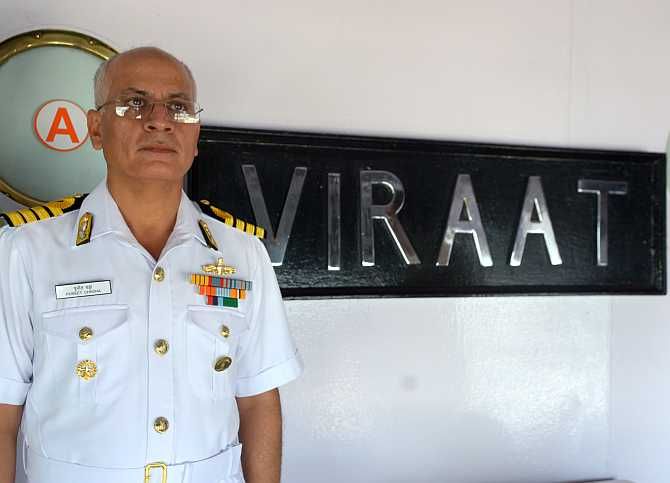 Captain Chadha, above, said Operation Jupiter and Operation Parakram counted among the most notable when she served the Indian Navy.

"During Operation Jupiter, she was tasked to be ready to withdraw the IPKF (Indian Peace Keeping Force) from Sri Lanka. For that she embarked a battallion of the Garwhal Rifles at sea and quickly worked up and deployed very quickly."

This is what Captain Chadha said about the Viraat: 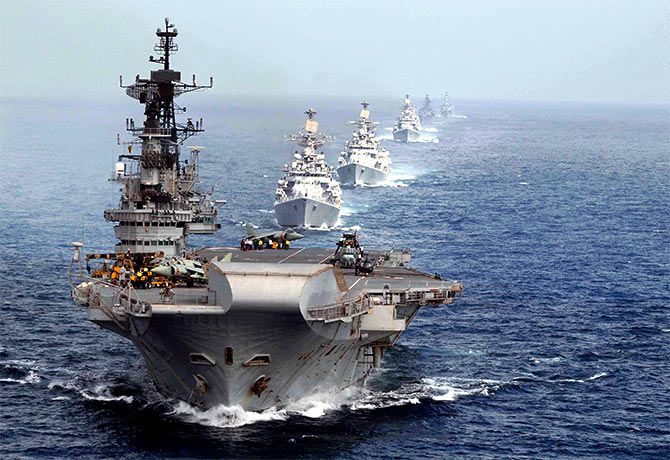 "The ship participated in various international joint exercises like Exercise Malabar (with the US), exercise Varuna (with the French), Naseem-Al-Bahar ( with Oman's navy). She has also been an integral element of all the annual theatre level exercise (TROPEX)," the admiral said.

"The last operational deployment of the Viraat was for participation in the International Fleet Review off Vishakhapatnam in February 2016," Vice Admiral Luthra added. 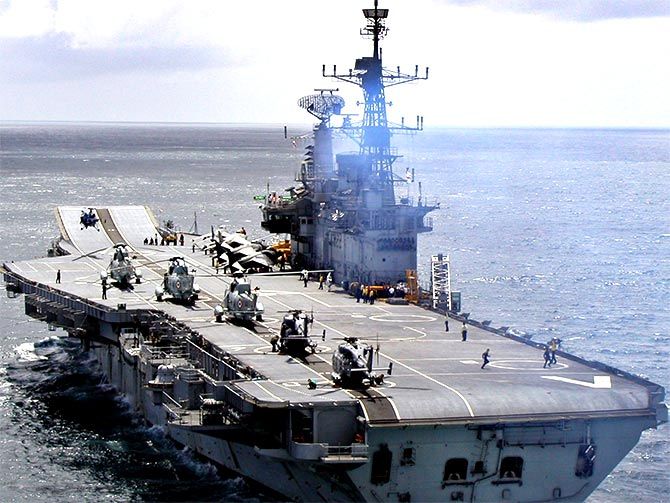 The Viraat has seen 22 captains serve her since 1987. And these included officers who went on to be appointed Flag Officers (40) and Chiefs of Naval Staff (5).

Admiral Sunil Lanba, the current Chief of Naval Staff, served as an executive officer on the Viraat. 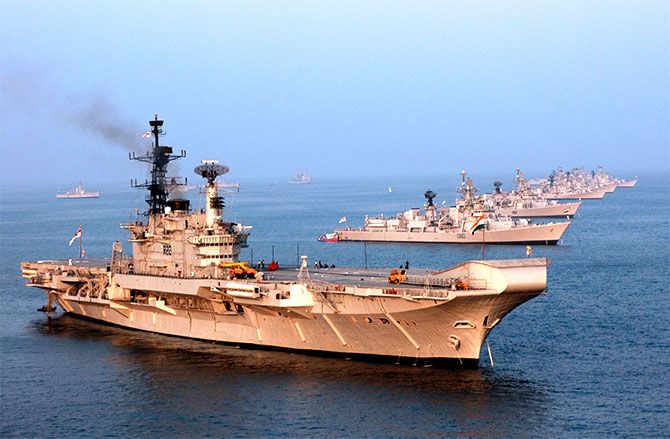 Before becoming a part of the Indian Navy, the Viraat, originally commissioned as the HMS Hermes, was commanded by 13 captains of the Royal British Navy."

"As the Hermes," Captain Chadha said, "she played a notable role in the Falklands war, where over 9,000 miles away from the UK she was the flagship of the Royal Navy and helped it retake the islands."