The MiG29K and MiG29KUB, the aircraft carrier's primary fighters, spent more time in the hangar than in the air, with fleet serviceability remaining below 50 per cent, reports Ajai Shukla. 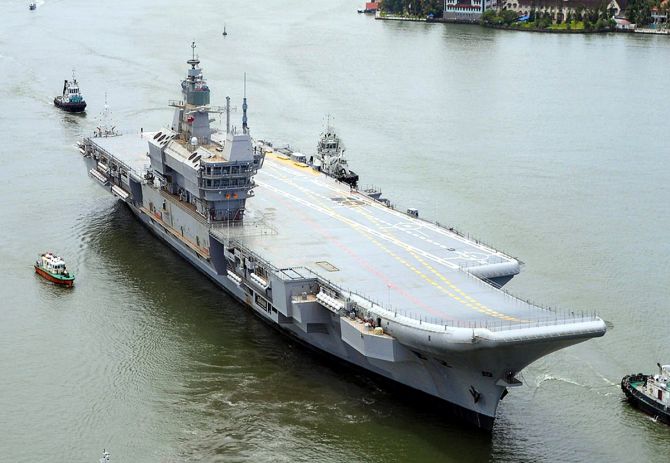 IMAGE: India's first Indigenous Aircraft Carrier, INS Vikrant conducted its sea trials on August 4, 2021.
Built at a cost of Rs 23,000 crore (Rs 230 billion), it is the largest and most complex warship ever to be designed and built in the India.
The Vikrant is expected to be commissioned into service next year. Photograph: PTI Photo

'Trials progressed as planned and system parameters proved satisfactory,' the Indian Navy stated on INS Vikrant's return to Cochin Shipyard Ltd, where it was built.

Alongside the jubilation, however, lies a saga of shortfalls and ineptitude -- in planning, obtaining sanctions, designing, construction and financing -- that has caused a delay of 12 years in building the aircraft carrier and shot up its cost 13 times.

Furthermore, the MiG29K and MiG29KUB, the carrier's primary fighters, spent more time in the hangar than in the air, with fleet serviceability remaining below 50 per cent.

The details lie in a report of the Comptroller and Auditor General -- Report Number 17 of 2016, hereafter, the CAG report -- -- and in replies given by the ministry of defence to Parliament questions last year. 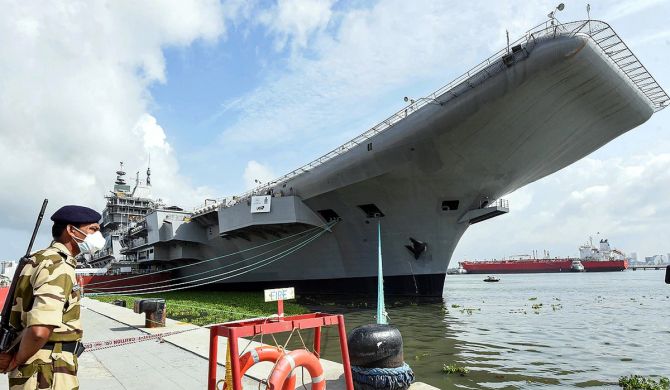 An aircraft carrier, which is essential for gaining sea control, is central to the Indian Navy's operational requirements and fleet doctrine, says the CAG report, underscoring India's tradition of being 'an aircraft carrier navy'.

The navy's carrier tradition dates back to March 1961, when it commissioned its first aircraft carrier, INS Vikrant. The 19,500 tonne vessel had earlier served the Royal Navy as HMS Hercules.

During that same period, the Royal Navy commissioned HMS Hermes in 1959 -- a 28,700-tonne aircraft carrier.

In 1987, when India's defence spending was at an all-time high, it joined the Indian Navy fleet as INS Viraat.

But two carriers were inadequate, the Indian Navy calculated, for an emerging regional power with a 7,500-km coastline, power projection ambitions, and two distinct sea sectors -- the Arabian Sea to the west and the Bay of Bengal to the east.

The CAG report says the Indian Navy Perspective Plan (1985-2000) envisaged a need for three aircraft carriers, of which two would be operational at any given time (one on each coast), with the third in refit. This was reiterated in the Maritime Capability Perspective Plan, 2012-27.

To achieve this force level, the Cabinet Committee on Security cleared construction of an IAC in May 1999.

The navy formulated staff requirements (SRs) -- listing a warship's functions, features and performance -- in September 1985, envisioning a carrier of about 35,000 tonnes.

In December 1988, a contract was concluded with DCNS France (now renamed Naval Group), for the concept design of what was termed a Sea Control Ship (SCS).

DCNS's concept design, presented in March 1990, concluded that a carrier of around 37,500 tonnes was required.

But the economic crunch of the early 1990s forced the navy to drastically pare the SRs, limiting the carrier to just 19,500 tonnes. 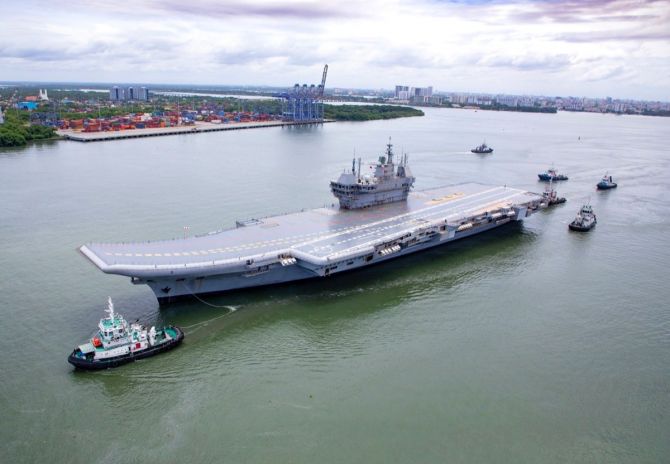 In May 1999, with the Kargil conflict imminent, the navy insisted on getting a more capable carrier.

The original INS Vikrant had been decommissioned two years earlier and INS Viraat was due for major refit.

The MoD proposed to the CCS the construction of an indigenously designed air defence ship (ADS) -- as the IAC/SCS was called in the MoD's proposals of May 1999 and October 2002.

In October 2002, with the Indian and Pakistani militaries having spent almost a year in eyeball-to-eyeball confrontation in Operation Parakram, the MoD told the CCS that the importance of sea control and power projection demanded a 37,000-tonne carrier.

'Thereafter, the Ministry again proposed (March 2014) to the CCS a revision in cost of the aircraft carrier to Rs 19,341 crore along with revision in its delivery schedule from December 2010 to December 2018, which was approved (July 2014) by the CCS,' notes the CAG report.

Since then, senior naval sources say that the cost of IAC-1 has risen to Rs 23,000 crore.

With INS Viraat due to retire in 2016-2017 and no replacement in sight, a stopgap was clearly essential.

Eventually a Russian carrier -- the Admiral Gorshkov -- was commissioned into the navy in November 2013.

'The Indian Navy's operational readiness and maritime capability will be affected due to the availability of only one aircraft carrier,' notes the CAG report. 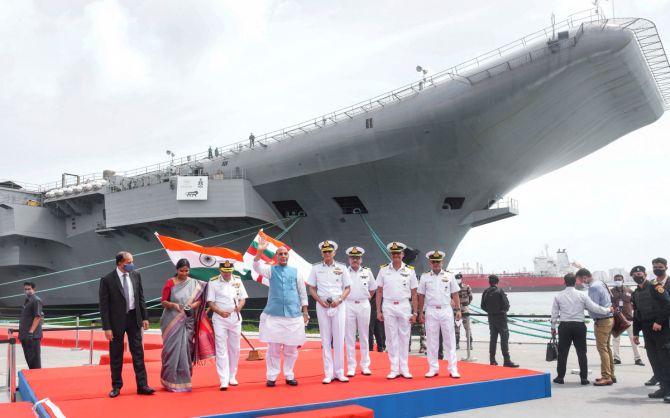 Cochin Shipyard, the shipyard that would build INS Vikrant, had no experience of warship construction.

Yet DCNS's recommendations to augment its capabilities were only partially implemented.

'There is continuing disagreement over project timelines between the Indian Navy and CSL, with realistic dates for delivery yet to be worked out,' notes the CAG report.

Furthermore, 'non-availability of steel delayed commencement of hull fabrication whereas late receipts of critical equipment like diesel alternators and gearboxes delayed launching of the ship,' says the report.

The gravest delays afflicted the Aviation Facilities Complex, which handles all flying operations. This has not yet been delivered.

The MiG29K, which Russia designed to operate off INS Vikramaditya, was also chosen for INS Vikrant as the 'mainstay of integral fleet air defence'.

Furthermore, the MiG-29K's full mission simulator, on which pilots are trained to operate off aircraft carriers, was found unsuitable, as the (simulator's) visuals did not support the (mission) profile'.

The navy says INS Vikrant will be commissioned in 2022. Even so, the navy would still need to evaluate the Aviation Facilities Complex by carrying out flying trials with the MiG-29 -- which will carry on into 2023.