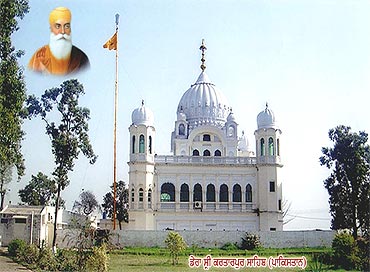 My remote village of Dera Baba Nanak on the Pakistani border in Punjab is once again obliquely in the news, but this time for positive reasons.

Normally as tensions rise with Pakistan it comes alive to the roar of tanks and the rattle of field guns as they camouflage themselves in scattered mango groves, their barrels aimed across the now near-dry Ravi river meandering between the two countries.

But with the incremental improvement in ties with Pakistan, the proposal to open the corridor from DBN to the  some 4 kilometres away on the Pakastani side, founded in memory of Sikhism's founder Nanak Bedi has once again been resurrected.

According to news reports from Islamabad Syed Asif Hashmi head of Pakistan's Evacuee Trust Property Board, responsible for maintaining shrines of minority communities in the country, indicated his willingness to create a special passageway for pilgrims up to the Kartarpur gurdwara that is of special import to both Sikhs and Hindus.

Dera, meaning encampment, is where my ancestor Nanak spent the last 17 years of his life till 1539 farming a small plot of land.

A distant relative is the custodian of his white homespun cloak and wooden slippers which are displayed each year at a special fair in the village in March attended by tens of thousands of devotees.

Before Partition even Muslims flocked to visit the holy man's effects as he was revered by all communities, but all that has long ended.

Normally DBN makes the news when it becomes the scene of heavy army deployment like after the 2001 attack on Parliament when both the Indian and Pakistani armies mobilised.

Militarily, it is the gateway to Sialkot, barely 25 km distant as the crow flies and my parents recall that just for one day at independence Dera ended up inside newly created Pakistan as confusion prevailed over boundary lines.

Conflict and war are not new to Dera's residents, the majority of them farmers.

Many remember the 1965 and 1971 wars with Pakistan when all the women and children were dispatched to nearby towns for safety and the men folk stayed behind to tend to their fields and look after the jawans, lavishing Punjabi hospitality on them.

Artillery and tank duels raged around Dera for control of the vital bridge over the Ravi, badly damaged in 1965 and never repaired since.

The artillery fire in 1971 was equally fierce as some of the field guns secreted in our small family mango grove with the century-old open well with its crystal clear water, relentlessly bombarded the enemy.

But we all remain convinced that the wise and spiritually benign Nanak hovers protectively above ensuring that no harm comes to his beloved village.

"Guru Nanak's blessing will ensure that nothing happens to us" Raghbir Singh Bedi, a retired school headmaster confidentially says. "His (Nanak's) blessings made sure that no harm came to us in the last two wars. He will do the same for us again if there is a fight," he added.

But the possibility of military hostility for many residents remains a reality even as the cacophonic drone of loudspeakers, relaying Sikh prayers, barely manage to edge out the previous nights continuing din of popular Punjabi songs being played by the local eunuchs to celebrate the birth of a child in Jewellers Alley.

This is the area where my grandfather, a sessions judge in what is now Pakistan, once came across a pot full of gold coins and jewellery whilst digging the foundations of our family house, now a complete ruin over a century-and-a-half later. He was allowed by the colonial administration to keep one gold sovereign from the entire cache.

Over the years we heard fascinatingly romantic stories of many others similarly finding treasure buried in walls that crumbled during the monsoon rains, a phenomenon the village elders attributed to divine intervention and association with Nanak.

Decades later, however, a more prosaic and plausible explanation emerged: the booty was what refugees fleeing their homes Pakistan in 1947 buried on brief stopovers at the frontier village, hoping to collect it later, but never ever did.

A short distance from Dera's narrow bazaar dominated by the ancient golden-domed Gurdwara is the newly constructed viewing gallery looking into Pakistan, built recently by the Border Security Force.

From atop this tower lush green fields of ripening wheat and paddy dominate both sides of the border, belying the heightened tension between the two sides.

Ordinarily, this bucolic landscape would be idyllic. But, sadly it hides within it an inherent nastiness and enmity, capable of erupting into discord anytime. Hopefully with the proposed corridor to Kartarpur Sahib, this dissonance will somewhat mitigate in Nanak's memory.