India plans to be among top 5 defence producers by 2025

The defence ministry is shooting to achieve an annual export target of $5 billion by 2025.
Ajai Shukla reports. 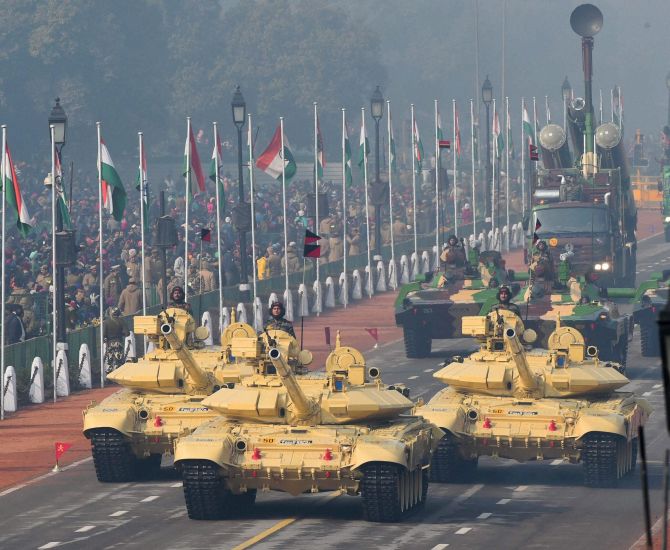 In an unusual thrust to meet ambitious export targets, Indian defence officials recently made a pitch for defence and aerospace products to over 50 foreign military attaches posted with their embassies in New Delhi.

The defence ministry is shooting to triple exports over this enhanced figure over the next five years. The Defence Production Policy of 2018 (DPrP-2018) stipulates an annual export target of $5 billion by 2025.

New Delhi considers exports essential for meeting the DPrP-2018 target of making India one of the world's top five defence producers by 2025.

They underscored New Delhi's recent policy and regulatory reforms, which they claimed had cut down licensing requirements and speeded up export clearances, enabling Indian firms to compete better for international tenders.

'We will have to start looking at exporting (weapons) platforms,' he said, referring to high-value, complex, combat equipment such as fighter aircraft, helicopters, tanks and artillery guns.

The defence industry often complains that the Indian military's reluctance to induct Indian-made weaponry into its arsenal puts off foreign buyers. Jaju asserted that is changing.

'Our country now has platforms that have already been purchased by the Indian military, which are world-class and at cost-competitive prices,' he said.

Babasaheb Kalyani, chairman, Kalyani Group, praised the Advanced Towed Artillery Gun System, which his company is developing in partnership with the DRDO as 'one of the finest artillery guns on the planet'.

General Rawat asserted that the Indian military's processes for testing and evaluating arms and equipment were 'of the highest standards'. He offered to test and certify the Indian weaponry that would be on offer at Defence Expo 2020 in Lucknow next year.

A key reason for the meagre sales of Indian weapons platforms abroad is because they are mostly produced by India's public sector -- the eight Defence Public Sector Undertakings and 41 Ordnance Factories -- which has hidebound and inflexible marketing mechanisms.

An analysis indicates that DPSU/OFs accounted for less than Rs 800 crore of the Rs 10,500 crore worth of defence equipment that India exported last year.

Further, many of these DPSU/OF export orders came through the global marketing networks of private firms like L&T, Bharat Forge and the Tata Group, who then sourced parts and subsystems of these orders from DPSU/OFs -- especially weapons systems, which the defence ministry continues to largely reserve for the public sector.

For example, if L&T wins an order from a foreign navy to supply a complete 'anti submarine warfare' system, the private firm would build the launchers and the control systems, but be forced to source the torpedoes from Bharat Dynamics Ltd, since that DPSU retains a monopoly over torpedo manufacture.

However, Jaju focused on the defence ministry's initiatives to hasten approvals.

Export authorisations are much quicker, he said, with clearances that earlier took over a month now being given within a week.

'Red tape has to be cut down and, to an extent, we have done that. We have become much more customer-friendly and the ease of doing export business will be further enhanced,' he said.

Jaju also highlighted 'lines of credit' that the government has offered friendly foreign countries -- such as Myanmar, Maldives, Sri Lanka and others -- for purchasing Indian defence equipment.

Indian DPSU shipyards have built several offshore patrol vessels for regional navies, but they have significant capacity limitations and no warship export orders have been placed on private shipyards as yet.