Captain Saurabh Kalia was captured, tortured and barbarically killed in the Kargil War.
For 20 years, his father has waged a war of his own to get justice for his son.
Captain Kalia is no more, but he lives on in the home he did not return to.
Archana Masih/Rediff.com reports how the martyr's family faces grief with grace.

It was the heaviest burden that 20-year-old Vaibhav Kalia had ever shouldered. He was the younger of two brothers, with no care in the world, the child to remain home with his working middle class parents after elder brother Saurabh left to join the Indian Army a year-and-a-half earlier.

That summer morning in his home in Palampur, Himachal Pradesh, Vaibhav read the newspaper and started shaking in anxiety. He did not have the courage to tell his mother that Saurabh could be missing, so he went to meet his father at the office.

Twenty years later, it is still the heaviest burden he has borne.

Captain Saurabh Kalia and his patrol of five men was captured in the Kaksar region during the Kargil War.

They were brutally tortured for 22 days and inflicted barbaric wounds beyond human imagination.

When the mutilated body was returned by the Pakistan army, young Vaibhav identified whatever remained of his brother because no parent should ever see a child that way -- it was the hardest thing he did. IMAGE: The family has created a museum in Captain Saurabh Kalia's memory at their home in Palampur, Himachal Pradesh.
It shows his life through the belongings he possessed -- among them are his army uniforms, pictures, letters, medals, a cancelled cheque for his first salary that he did not live long enough to encash. Photograph: PTI Photo

Twenty years after losing his brother, Vaibhav Kalia is a professor, husband and father of two boys.

His army officer brother, martyred just six months after joining the armed forces, still remains the most important part of the family home named after him.

He continues to live in his home and in the hearts of those who loved him most.

"There is a lot of conversation about Saurabh within our family, it can be around the dining table, or anywhere else," says Vaibhav who hopes his sons Paarth and Vyomesh will join the armed forces one day.

It is a tribute to the families of martyrs that they soldier on, undeterred after losing young loved ones in the service of the country -- yet bearing the courage to send more of their own into the army.

Vaibhav's sons have grown up with stories of Captain Kalia. They have seen visitors come into their homes, especially aspiring soldiers, to see the museum containing his possessions.

It is a sacred place where visitors enter with reverence, seeing Captain Saurabh's life through the things that were once his -- trunk, shoes, uniforms, pictures and the Indian flag that had held him in the final embrace.

"A lot of people visit us and talk about him. My kids are an audience to all the conversations," says Vaibhav, an assistant professor at the Himachal Pradesh Agriculture University.

"Many young people who are armed forces aspirants come to the museum and seek the blessings of my parents." 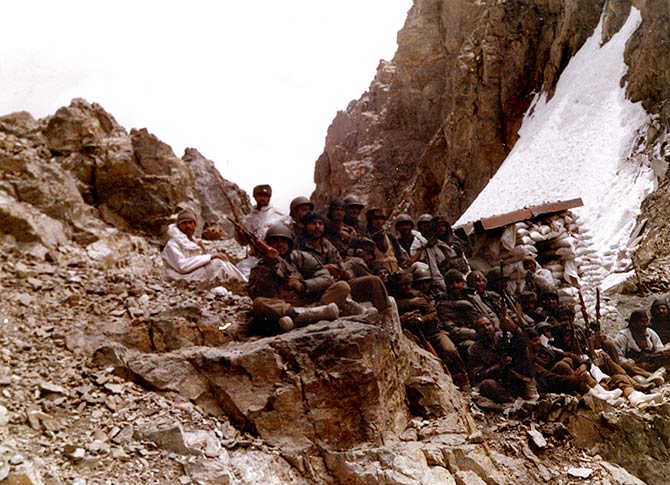 IMAGE: The Bajrang Post in Kaksar where Captain Kalia and his men were on a patrol when they were captured. The post was recaptured by the Indian Army. Photograph: Rediff.com

Vaibhav has never thought about visiting the area where his brother was captured, not knowing how he will react or what he will feel to be in a place where his brother must have walked, rifle in hand just before he died.

"Just as religious pilgrimages are performed only when God wishes, I feel my pilgrimage to that place will also happen when God desires."

In the sacrifice of every soldier in the line of duty is also the immense sacrifice of the families they leave behind. The dreams parents must have had for their young sons washed away in tears that seldom dry.

Martyrdom changes the paths of families, dashes its hopes and plunges it into unimaginable grief, yet from the deepest abyss, families find courage to stand up again.

They deserve our respect. 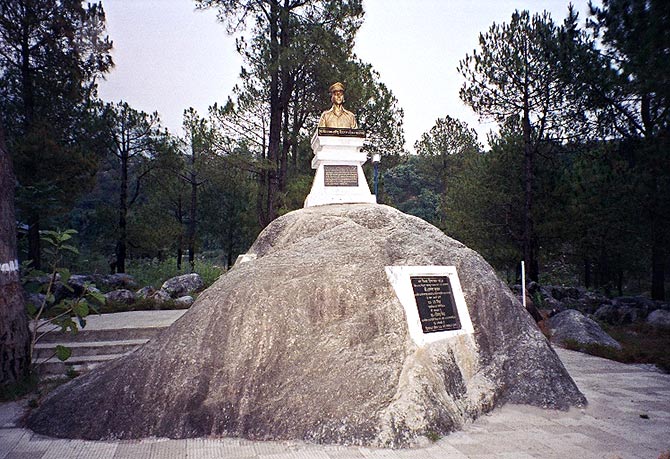 IMAGE: Captain Kalia's statute in a park named after him. The park was severely damaged in the floods last year. Photograph: Seema Pant/Rediff.com

"Life is all about joy, sorrow, pain, accomplishments and dreams. I have seen the dreams of a simple middle class family, fly sky high seeing their elder son join the armed forces as an officer, which subsequently unfolded in a tragic sequence of events," Vaibhav tells me in an e-mail.

"We feel like we are the masters of our situations where we can control/influence anything and everything, but life has its own script."

"It is even more painful to see bright young men of the armed forces laying their lives in the service of nation. The pain of their families is exactly the same."

The Kalias remain overwhelmed with the respect they have received by the people of their town and elsewhere.

Every year, the Indian Army invites them for Vijay Diwas to commemorate victory in the Kargil War in Drass but they have not attended one yet.

Like every year, this year too, they have been invited for the Vijay Diwas function.

In their home and town, they commemorate Captain Kalia's life in their own way.

On June 29, Saurabh's birthday, an inter-school science exhibition is held every year at the DAV Public School where he studied.

And a framed picture of him in uniform hangs in the college he attended.

The family has instituted scholarships in his name.

A shanti-hawan is performed on June 9, the day of his martyrdom.

"People visit us during these events and pay their tribute. Saurabh is remembered very fondly by the people of Palampur," says Vaibhav.

His course mates at the Indian Military Academy stay in touch and army officers posted around Palampur visit the family. I met Captain Saurabh's parents Dr N K Kalia and Mrs Vijaya Kalia in their home in Palampur 15 years ago.

Mrs Kalia, who had suffered a heart attack on hearing the news that her son was missing, had returned after a heart procedure and was advised bed rest at that time.

On the table beside her bed was a picture of her son. Nothing else, not even a bottle of medicines or a water glass, occupied that small table. It was her very own altar by the bedside.

Every martyr's family has a room, a wall, an altar, a show case, a photograph among the gods and goddesses of the loved one they lost while serving the nation.

They are no more, yet they are always there -- in the most exalted spaces of their homes they never returned to. 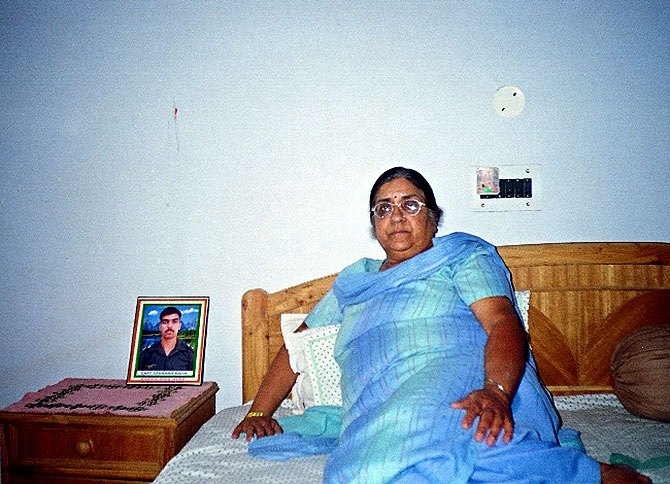 IMAGE: Mrs Kalia kept a picture of her martyred son by her bedside. Nothing else, not even a bottle of medicines or a water glass, occupied that small table. Photograph: Seema Pant/Rediff.com

Dr Kalia, Captain Saurabh's father, has not wavered in his commitment to his son -- not even once in these 20 years.

He has petitioned every government, every embassy, every important person he thinks will give him a hearing and India's Supreme Court about the human rights violation and the flouting of the Geneva Convention in his son's case.

Dr Kalia lives in the hope that the government will take the case of Pakistan's heinous war crime against his son and his men to the International Court of Justice.

He has petitioned the highest court in the land to direct the Union government to move the ICJ, but both the Manmohan Singh and Narendra Damodardas Modi governments have failed to do so yet.

"The treatment given to Capt Saurabh and his five jawans is in gross violation of the Geneva Convention. As a citizen of India, it is our responsibility to safeguard the human rights of our soldiers who are protecting us from enemies all around," says Vaibhav.

Dr Kalia was 15 years younger than when I first met him. He is now 70 and retired. He had told me he would pursue the case with whatever strength he has till he is no more and he remains resolute about fighting for justice for his son till his last breath.

I am always moved looking at the dignified grace with which martyrs's families confront their grief and loss. The courtesy that they show to those who invade their memories about the men they loved dearly and lost too soon.

Of parents who have to bear the torment of performing the last rites of young sons. Of wives who stand stoic, holding back tears when the military gives a guard of honour in that final moment. Of children who cannot comprehend the magnitude of the loss.

These are the band of people to whom the nation owes a debt. Martyrs deserve our respect, so do those they leave behind.