With a massive final push, which began mid-November, Syrian forces loyal to Bashar al-Assad took over the last remaining rebel strongholds in the historic city of Aleppo on the night of December 12.
They won a ruined city and ruined lives. 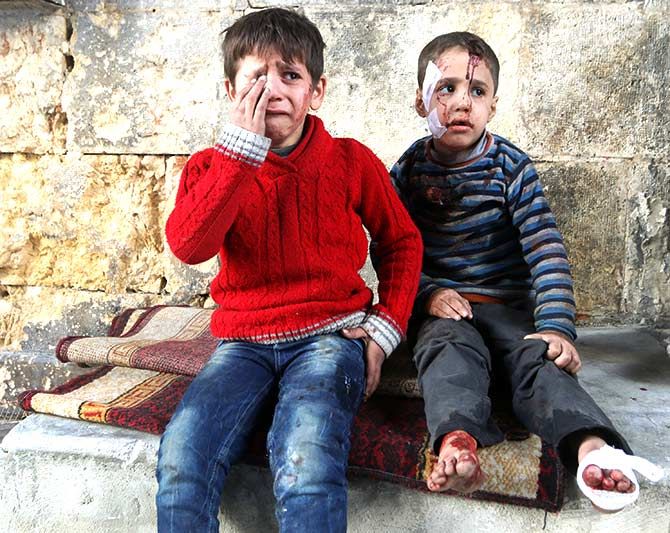 TThe innocent victims of airstrikes on the rebel-held areas of Aleppo, November 18, 2016.
The Aleppo Offensive -- this phase code named 'Operation Dawn of Victory' -- was launched on November 15 by the Syrian armed forces and allied groups, including the Russian armed forces.
They conducted heavy air and Cruise missile strikes against the rebel-held districts in Aleppo.
Photograph: Abdalrhman Ismail/Reuters The ruined Omar Bin Abdulaziz hospital in Aleppo on November 19.
This, 'the last operating hospital in east Aleppo', was destroyed by airstrikes a day earlier.
Another four hospitals were hit and forced to close that day, leaving an estimated 250,000 residents without access to surgery or specialist care.
Photograph: Abdalrhman Ismail/Reuters A man inspects an unexploded missile in a rebel-held al-Qaterji neighbourhood on November 28.
By December 4, the Syrian army had captured this and other areas of Aleppo's Old City.
Photograph: Abdalrhman Ismail/Reuters Syrians flee the clashes by going deeper towards other rebel-held areas on November 28.
Civilians in these areas faced an impossible choice between fleeing through war-torn zones or staying and facing capture and death.
Photograph: Abdalrhman Ismail/Reuters While many chose to flee deeper into rebel-held areas, many more -- like those pictured here on November 29 -- evacuated and headed to government-held areas.
Photograph: Reuters Syrians evacuated from eastern Aleppo reach out for Russian food aid in the city's government-controlled Jibreen area on November 30.
The text on the bag, showing Syrian and Russian national flags, reads in Arabic: 'Russia is with you.' Photograph: Omar Sanadiki/Reuters Syrian government forces took control of another area on December 2.
The victory in Aleppo was always viewed as one of the Assad regime's most important victories in a civil war that has devastated Syria.
Photograph: Omar Sanadiki/Reuters Even as the massive military push continued, ordinary people couldn't help but return -- often with their children -- to inspect their homes.
The poster on the bus in the government-controlled Hanono housing district on December 4 shows Syria's President Bashar al-Assad and reads in Arabic 'Together.'
Photograph: Omar Sanadiki/Reuters 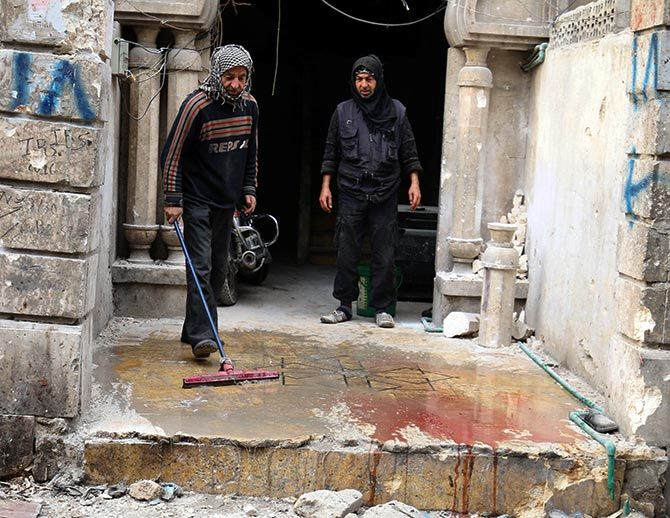 An injured woman walks at a site hit by an airstrike in a rebel-held neighbourhood on December 7.
Russia's RIA news agency quoted Russian Foreign Minister Sergei Lavrov as saying that the Syrian army had halted military activity December 8 to let civilians leave rebel-held territory.
Reuters, however, reported that bombardment could still be heard.
Photograph: Abdalrhman Ismail/Reuters Along with stories of a possible cease fire -- which was being negotiated between the US and Russia to allow civilians to leave, but failed -- emerged these heartbreaking photographs of children collecting firewood from debris at a site hit by airstrikes in a rebel-held neighbourhood and children lighting a fire using plastic bags to keep warm inside a government controlled shelter.
Photographs: Abdalrhman Ismail and Omar Sanadiki/Reuters Aboy reacts to a photographer while waiting to fill containers with water in a rebel-held besieged area, while another pulls a cart full of water containers on December 10.
Photographs: Abdalrhman Ismail/Reuters 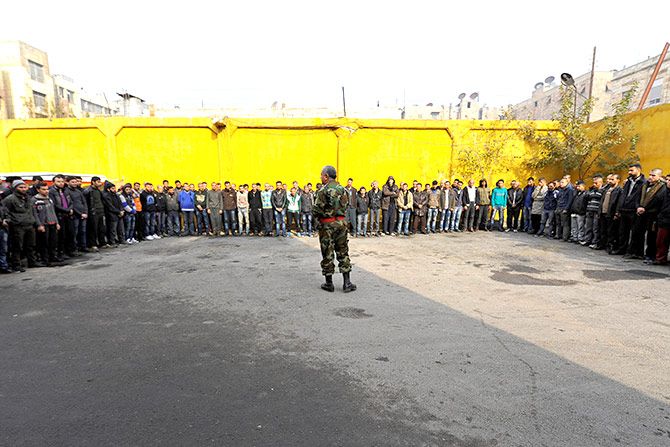 A brigadier general addresses men, who were evacuated from the eastern districts of Aleppo, as part of a preparation to begin their military service at a police centre on December 11.
Photograph: Omar Sanadiki/Reuters A member of forces loyal to Syria's President Bashar al-Assad in the government-held Sheikh Saeed district of Aleppo, during a media tour, on December 12.
The advance of the forces loyal to the Syrian regime was marked by, what The Guardian termed, 'some of the most intense bombardment of the war.'
A resident described it to the British newspaper as a kind of 'doomsday.'
The besieged residents faced 'non-stop artillery shelling through the night (of December 11) and Monday morning (December 12) and numerous airstrikes.'
Photograph: Omar Sanadiki/Reuters A Free Syrian Army fighter in a rebel-held area on December 12.
Overall, Assad's army secured 9 districts during the day, leaving rebels with nothing but a sliver of territory that was expected to fall December 13.
Assad had described Aleppo as the 'last hope' of the rebels and their backers, although he said the war would continue once it falls.
'The battle of Aleppo will be a gain, but ... it doesn't mean the end of the war in Syria. It is a significant landmark towards the end of the battle, but the war in Syria will not end until terrorism is eliminated.'
Photograph: Abdalrhman Ismail/Reuters A man in a remaining rebel-held area carries a child with an IV drip as he tries to find a safe place on December 12.
With no aid in sight, many others remained trapped under rubble.
Along with the terrifying collapse of Aleppo emerged reports of spine-chilling brutalities and mass executions and fears of genocide.
Humanitarians and activists sent out 'last messages' via social media fearing they would be killed by the bombing or at the hands of the army.
The White Helmets, a group of volunteer Syrians who act as first responders, tweeted on December 12, 'There is no total number of casualties in Besieged #Aleppo today, all streets & destroyed buildings are full with dead bodies. It's hell.'They also published an impassioned plea for the UN to intervene: 'The bombs are falling as we write this. For years our humanitarian volunteers have worked to save the lives of our people in Aleppo: operating in underground hospitals, rescuing entire families buried under rubble and risking our lives to document what the daily war crimes committed by the Assad regime and its ally Russia. We can do no more...
'We are calling on you in the international community to provide safe passage out of Aleppo for the remaining 100,000 people.'
'We know that the UN has a plan to get us out across the 4 kilometres of Western Aleppo to safety: With a few dozen buses and lorries we could all be evacuated in twenty-four hours.'
'However, we need you to guarantee the safety of their workers and our own.''If we stay we fear for our lives.'
'The women may be taken to camps, the men disappeared and anyone who is known to have supported civilians will face detention or execution.'
'We've watched thousands of our boys and men be detained.'
'Countless White Helmets, doctors, nurses and humanitarians have been targeted and killed in the regime's cruel assault on Aleppo.'
'The regime has been trying to kill us for five years.'
'Please don't get them this chance.'
'We cannot believed that the world's most powerful countries cannot get 100,000 souls four kilometres to relative safety.'
Photograph: Abdalrhman Ismail/Reuters