'Rajan epitomised the best of his generation -- veneration for knowledge, for old fashioned morality of honesty and modesty.'
Economist Devaki Jain, Padma Bhushan, salutes her brother who passed into the ages last week. 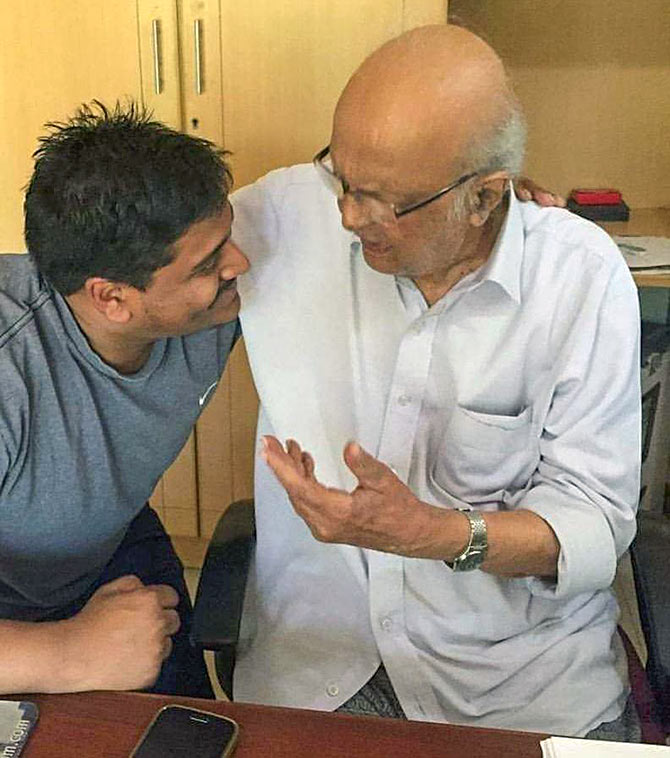 He was 97 years old and an exemplar.

A civil servant, he demonstrated a complex of virtues -- often invisible, neglected -- setting the moral code for what can be called the 'good' life.

But as philosophers might say, a good life is one lived with impeccable honesty, resistance to incentives, opportunities to engage in injustices for personal satisfaction.

He lived it all.

And in the midst of being a Tamil Brahmin -- a much abused derided social group, the ugly Tam brahm, to use colloquial terminology -- went deep into Sanskrit texts, and churned them, drawing the essence of its values, not practices.

In revitalising the Sanskrit academy in Melkote, Thirunarayanapuram, in Mandya district, Karnataka, he brought out the reasoning, the logician's grammar, not religion.

One up on Aristotle.

He had always been drawn to Sanskrit, a language he had to study for his civil service exam, and also earlier in school.

So after retirement he gave his skills and his intellectual power to revive the Sanskrit Academy in Melkote, Thirunarayanapuram, as it was called.

He was attracted by the fact that it had a treasure trove of documents, books written by scholars, mainly on Tarka Shastra, logical argumentation.

Our great grandfather, Anandalwarswamy, was supposed to have been a master of this Shastra, a vidwan as they were called.

I think if genetics as described by that modern genius, Siddhartha Mukherjee, author of the brilliant book The Gene: An Intimate History, is to be believed, it was in our genes and Rajan inherited it.

He moved away from religion and its rituals and ideas to logic and philosophy more into the Upanishad type concerns and ideas.

But when he found the atmosphere at the academy polluted by the ambitiousness of the administrator, he moved out.

His partner was in full sync with him in his rejection of ritual and ensured that when he died, he was just quietly taken to a crematorium.

No puja, no mantras, no 'wake', as they call post death events.

So how did Rajan fly over or subsume this stereotyping, and draw on what can be called the essential moral code of integrity, quietness, dutiful -- picking on ancient texts as knowledge, not scriptures -- as guidelines for life and death?

He was known to be stubborn, whether as a bureaucrat or as a civilian, unyielding to suggestions to step out of line from the moral code.

Inducements to civil servants usually are from their ministers or from senior family members to use their powers to what would not come naturally, in due process.

As our mother used to say -- both admiringly as well as sometimes impatiently -- "His stubborn manner is really an irritant to your father."

But there is a kind of moroseness that being different brings.

He was different from his other three brothers, the only intellectually gifted son.

Thus, he was also in some sense lonely as he was not part of what would have been a fitting profession for him -- a teacher, a scholar, located in a university.

In the milieu in which he found himself, bureaucracy and traditional family ties, his, perhaps unspoken desires did not find an avenue for expression. 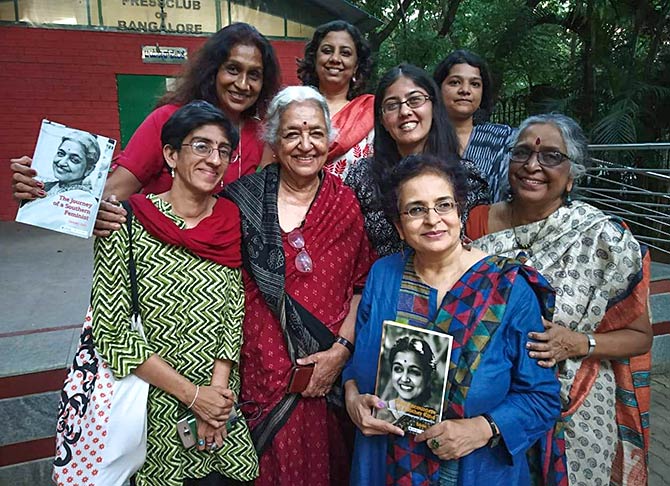 An MSc in physics and mathematics, Rajan joined the Mysore Civil Service, the MCS as it was called, with a second rank in the examination.

Our father M A Sreenivasan had also taken that exam some two decades earlier with a first rank.

He used to recall how interesting and stimulating it was to work with her as she carved out the design and programmes for the Republic Day celebrations which were initiated during her tenure.

He explained to me how the time table of preparations, called the drill these days, started as early as November for the event in January.

The idea of folk dances and so many other features of Republic Day celebrations, he recalled were crafted by her.

Then the usual course of professional life for a civil servant -- postings as, for example, the chief executive of the public sector enterprise, Hindustan Photo Films, located in Ooty in the Nilgiris... then deputy director of the Administrative Training Institute in Shimla... revenue commissioner, government of Karnataka.

During his tenure as revenue commissioner he pulled together three volumes on land reforms. So full of the original records and ideas, it could be called the Anatomy of Land Revenue in India.

Rajan epitomised the best of his generation -- veneration for knowledge, for old fashioned morality of honesty and modesty.

He left behind not only the bureaucracy but also institutions. He epitomised the best of traditional values, now in retreat.

His understanding of education was responsible for my being a graduate. As otherwise, the idea was to get me married, pre-puberty as was done to my immediate elder sister. The first step to my emancipation and who I am today.