The Tablighi Jamaat avoided confrontation, stayed clear of conversion of non-Muslims, abjured politics and focused only on religious attainment.
A fascinating excerpt from Ziya Us Salam's Inside The Tablighi Jamaat. 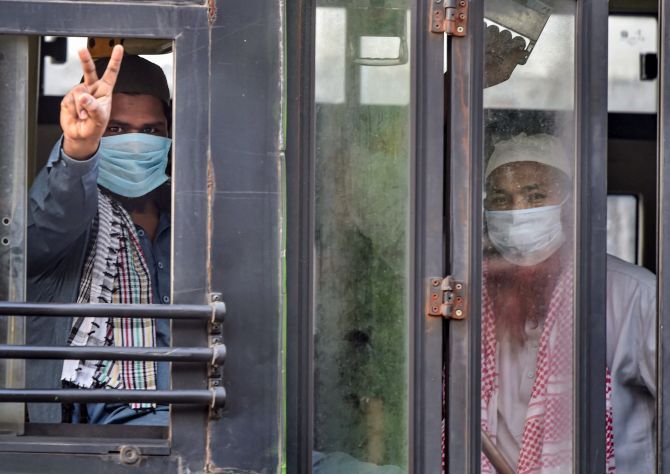 Sometime in the 1890s, Swami Dayanand Saraswati started an energetic campaign to win over poor Muslims, many of whom had converted to Islam from Hinduism, but still retained half-Hindu names and followed many of the rituals of their earlier religion.

Names like Bheema Sheikh or Rahul Khan were even more common in the first half of the twentieth century, speaking eloquently to the mixing of the two faiths in different generations of the same family or community.

Largely poor farmers with small landholdings, or landless farmers who worked on the fields of zamindars, they were usually illiterate too.

This combination of illiteracy and poverty made it easy for Dayanand Saraswati's Shuddhi campaign to take off in these areas in the first decade of the new century.

Unlike in 1877, it was no longer about individual conversion, but the assimilation of an entire community.

Saraswati sought to solve the problem of the caste of the new entrants through en masse conversion, thereby facilitating the creation of their own sub-society with its own rituals and customs under the larger Hindu umbrella.

With greater numbers, he attempted to silence the Sanatani Hindus who refused to regard the new converts as their equals.

As a prelude to the launch of this ambitious campaign, Maharaja Ranbir Singh, the ruler of Kashmir at the time, commissioned a 21-volume encyclopaedia -- Ranbir Karit Prayaschit Mahanibandh (Ranbir's Great Essay On Repentance) -- which, as Yoginder Sikand wrote in the Milli Gazette essay, 'argued the case and suggested strategies for the mass conversion of all the 'neo-Muslim communities (nau Muslim aqwam) of India to Hinduism. This book, Muslim leaders were to later allege, had been secretly circulated among leading Hindus so that the Muslims remained unaware of the plot.' 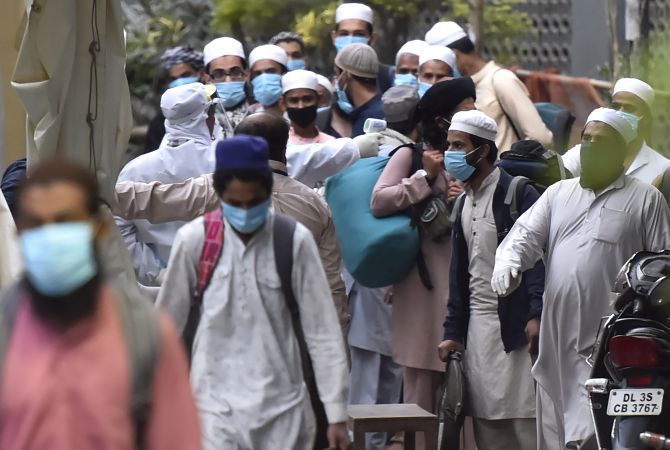 IMAGE: The Tablighi Jamaat headquarters in Nizamuddin, New Delhi, being evacuated on April 1, 2020, as many of its members and visitors tested positive for coronavirus. Photograph: Ravi Choudhary/PTI Photo

Early attempts to convert Muslims en masse came soon after the Bengal Partition of 1905. Add to that the creation of separate electorates and the fires of communalism had been stoked.

In 1908, Arya Samaj missionaries wooed poor Muslims of the Bharatpur region, asking them to renounce Islam in favour of Hinduism because they had, allegedly, been forcibly converted.

Significantly, soon after Narendra Modi assumed power in 2014, the first attempt at conversion of Muslims to the Hindu fold was reported from Agra, not far from Bharatpur.

Back in 1910, the Bharatpur incident was followed by the setting up of 'Shuddhi sabhas' in the Mewat and Awadh regions, notably in Hardoi, Kanpur, Etawah, Shahjahanpur and Meerut, not far from the headquarters of Darul Uloom, Deoband.

The Islamic seminary had gained international fame and would soon give rise to the Jamiat Ulama-i-Hind, an organisation of Muslim intellectuals which, beginning with the Khilafat agitation in 1919, played a crucial role in India's freedom struggle.

It was in Deoband that Maulana Muhammad Ilyas Kandhlawi, who would go on to found the Tablighi Jamaat, had studied.

The lessons of ummah and fraternity that he learnt from his ustads at the madrasa in 1908 stayed with him all his life, and in many ways, outlived him.

Having studied in Gangoh and Saharanpur too, he believed, that antagonism with the majority community would be suicidal and so decided to concentrate on reforming the community from within.

The need of the hour, he realised, was for Muslims to be more aware of religion, know its tenets and spread the word of Allah.

The emphasis was on becoming better Muslims. Once that was done, Allah's grace would ensure their success. Salah, thus, would pave the way to falah (success). 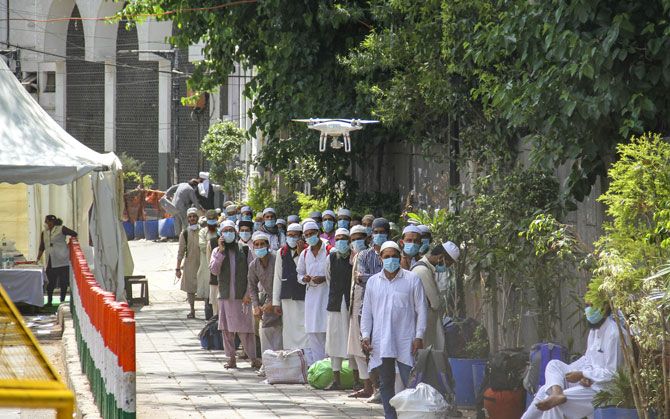 IMAGE: Tablighis leave after the Jamaat's headquarters in Nizamuddin, New Delhi, was evacuated on April 1, 2020, as many of its members and visitors tested positive for coronavirus.

Probably drawing inspiration from the azaan, the call for prayer where people are reminded, 'Come for prayers, come for success', Ilyas concluded that more and more Muslims had to offer daily prayers for the community to enjoy Allah's grace.

As many Muslims were both poor and unlettered, including those who had embraced Islam only a generation or two ago, they did not know the verses to be recited in the daily prayers.

Some could not even recite the Kalima, the first tenet of Islam.

There were many who had no idea what the Quran was all about.

Their rituals of birth, marriage and death were a blend of Islam and Hinduism (while solemnising their marriage, couples performed the nikah and took saat phere(seven rounds) around the ceremonial fire).

These were the people who were the most vulnerable to the conversion campaign, thought Ilyas.

These were the people he would concentrate on, encouraging his volunteers to go door-to-door, pursue and persuade them to come to the masjid.

Once they knew their prayers and mingled with people who knew about Islam, their bond with the faith would be strengthened.

As they ceased to be merely nominal Muslims, the chances of any conversion campaign finding success with them would diminish considerably.

Thus, in 1927, was born the Tablighi Jamaat, a Sunni Muslim revival and reform body that encouraged the faithful to look within.

Now favoured by a huge section of the Muslim community, the organisation followed the example of the Deoband movement, which, in the initial years after being founded in 1866, avoided confrontation, stayed clear of conversion of non-Muslims, abjured politics and focused only on religious attainment. 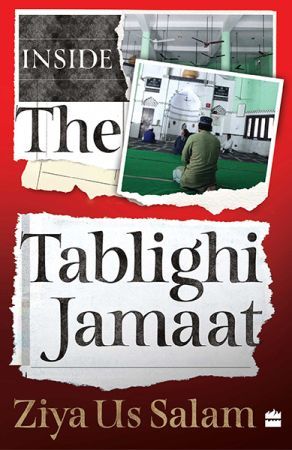 There is an interesting anecdote which many Tablighis relate when speaking of the reason behind the inception of the Tabligh.

In 1924, Ilyas had gone to Mecca and stayed there for five months.

As he weighed the pros and cons of settling there, he received a vision from Prophet Muhammad who commanded him to go back to India where Allah would give him work to do.

Ilyas returned to India soon after, confident he was destined to work for his faith.

In his mid-twenties, Ilyas is believed to have had another vision in a dream -- this time regarding the methodology of preaching.

He is said to have based the division of proselytisation work within the community on this vision.

Ilyas organised the Jamaat into groups of three or more men who would travel to different parts of the country and invite people to come to local mosques for daily prayers.

These volunteers would present the six salient features of the Jamaat: the Kalima, its recitation and meaning; regular salah five times a day; remembrance of Allah through specific words and verses (Ilm-o-Zikr); paying respect to fellow Muslims (Ikramul-Muslimeen); purification of intention (Tashih-e-Niyyah); and spending time in Tabligh communicating the message (Tafrigh-e-Waqt).

The Tablighi Jamaat was not alone in its resistance to the conversion movement.

With its connection at the grassroots, the Tabligh outlasted them all.

Helped along by the dire economic climate prevailing at the time, Ilyas, now Maulana Ilyas, used village panchayats to organize the Jamaat and was happy to use non-ulema and even nominal Muslims to advance the movement.

Excerpted from Inside The Tablighi Jamaat by Ziya Us Salam, with the kind permission of the publishers, HarperCollins India.