New Delhi bureaucrats, accustomed to leisurely lunches, golf in the afternoon and long weekends, have been shaken out of their somnolence, say authors. Fear and suspicion hang heavy over the red-sands. 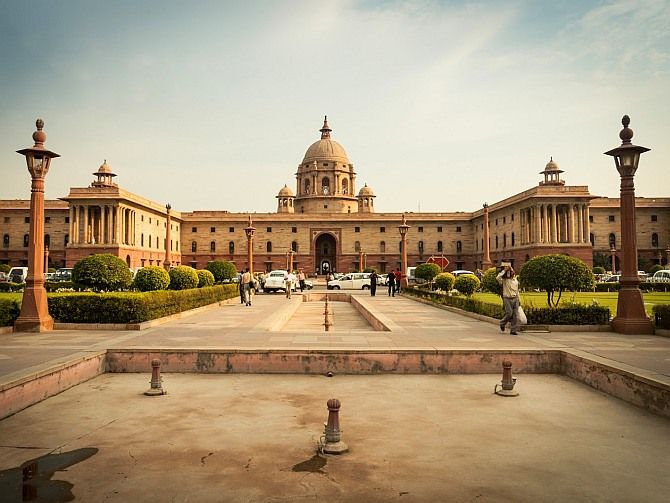 Frequent visitors to Delhi Gymkhana Club, one of the oldest and most coveted clubs of India, cannot stop smiling these days.

Once teeming with bureaucrats during, before and after lunch hour, the club is quiet in the afternoons now.

"You don't see them throwing their weight around in the bar anymore," chuckles Mohan Guruswamy, the chairman of Delhi-based think-tank Centre for Policy Alternatives and one-time advisor to former finance minister Yashwant Sinha.

The scene at India International Centre, another favourite hangout of bureaucrats, is similar.

"It's now easier to get a table at IIC during lunch," says Guruswamy, clearly enjoying the development.

And the driveways of the Delhi Golf Club are deserted during office hours.

"People would leave early in the evening to swim or play golf without completing the day's work. All that has changed," says a secretary with a ministry.

For the civil servants posted at the Centre, life has seen an upheaval in the three months since Narendra Modi took over as the prime minister.

Leisure has shrunk; work has increased. 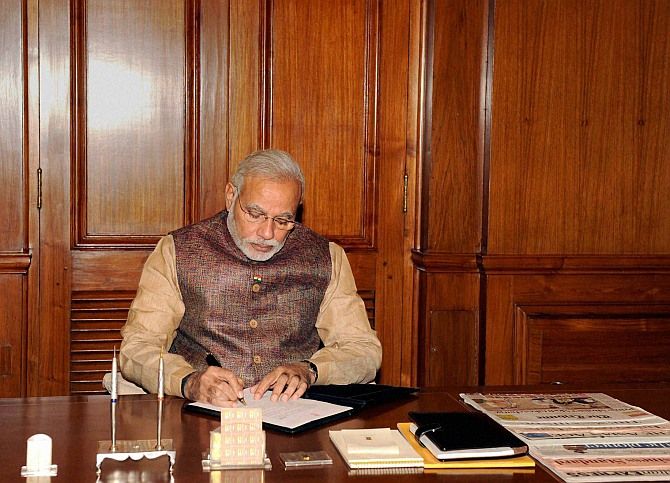 Officially, central government officers are still on a five-day week schedule, but most of them -- along with their clerks, peons and drivers -- are working almost every Saturday.

If they are not clearing files, they're preparing for the week ahead because there is no telling when the Prime Minister's Office will call asking for a file. It could be 7 in the morning or 10 in the night.

"The instructions are clear: right or wrong, take a decision," says a finance ministry officer requesting not to be named.

"Earlier I would hold a cabinet note for a month, but now I have to clear it in three days. In the last one month, I have cleared at least 10 cabinet notes."

That the "boss" (minister) is travelling can no longer be an excuse for delaying a file. Officials are supposed to take necessary approvals on e-mail and push the file forward.

Former finance minister P Chidambaram had also started this exercise, but it fizzled out in a few months. 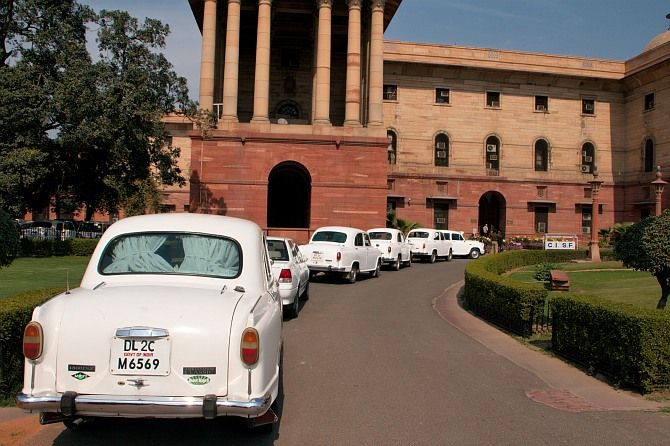 Since the PMO has made it mandatory for bureaucrats to submit an "outcome report" after every foreign trip, once-coveted junkets are also being viewed as a burden.

"These days I think five times before nominating myself for a foreign trip," says a once-globetrotting officer.

"What will I write in my outcome report?" These trips are already being trimmed.

The Empowered Committee of State Finance Ministers had planned to visit China and Russia in September end to study the goods & services tax model there.

Now it is leaving for only China on what will be its shortest ever foreign study tour with the smallest ever delegation.

Intra-department parties too have become frugal out of fear of the PMO's disapproval of any kind of ostentation.

Recently, what was meant to be a farewell party for a senior officer of the food ministry ended up as a modest rajma-chawal lunch at the Civil Services Officers' Institute among three people.

So are the bureaucrats complaining? Yes and no.

Along with greater pressure has come a sense of empowerment. Soon after assuming charge, Modi had met all top secretaries and shared his phone number with them, saying they could reach him directly.

Modi himself is in direct touch with several bureaucrats, even at the junior level.

Even during Manmohan Singh's tenure, it was common for the foreign secretary to directly brief the prime minister and the National Security Adviser, but not for the home secretary. 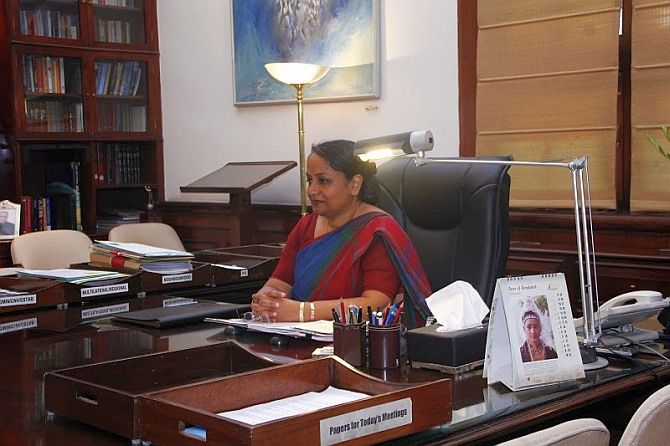 A senior Indian Foreign Service officer says that a few weeks ago he was surprised to see Foreign Secretary Singh stepping out of her official car outside South Block at 8 pm.

Fearing that there might be an emergency, possibly a diplomatic row in the sub-continent, the officer ventured to ask his boss

if everything was okay.

"Yes," she said, adding that she had gone to attend a meeting and was now returning to office to complete pending work.

Singh, the daughter of T V Rajeswar, who was the Intelligence Bureau chief when Rajiv Gandhi was prime minister, is now of Modi's trusted bureaucrats.

While some ministers are finding themselves out of the loop, bureaucrats are getting a greater say.

For example, the cancellation of the India-Pakistan foreign secretary-level talks was managed not by Swaraj, but by the PMO with NSA Ajit Doval, Singh and a few secretary-level officers.

The brain behind policies related to the farm sector is also said to be a bureaucrat in the PMO who was a former secretary in the agriculture department and was credited with launching the National Food Security Mission and conceptualising the Rashtriya Krishi Vikas Yojana.

One upright officer, who has faced frequent transfers, is happy that corruption, for one, will reduce in the corridors of power where touts were a fixture.

Meanwhile, the number of meetings has increased and stricter deadlines are in place, says an official in the home ministry.

"Attendance has improved and files are getting cleared faster."

With PMO tracking attendance and punctuality through a unique biometric identification system, all central government officers and staff have been asked to get their Aadhaar cards made to enable their entry and exit record under the new Aadhaar-enabled system.

The data, to be updated real-time, is likely to be monitored by the PMO. 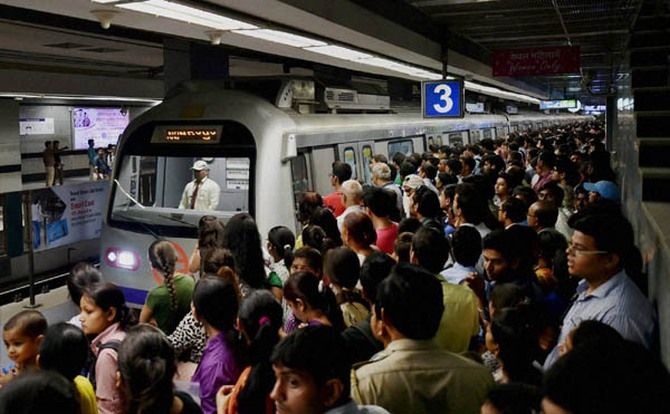 Ministers like Prakash Javadekar and M Venkaiah Naidu have made surprise checks and hauled up latecomers.

All this explains the morning and evening rush at the Central Secretariat Metro Station, the Metro station closest to the central government offices, as staff scrambles to reach office in time.

There is, however, also an element of fear, which could be counterproductive. Besides, not everybody is fitting in.

Modi's emphasis on the use of Hindi for all official work has left some bureaucrats, mainly those from south India, in a tizzy.

So much so that a senior official in the agriculture ministry was sent back to his parent cadre after he failed to take a note in Hindi. Several bureaucrats -- and ministers -- are also wary of the unseen network of "moles".

"What you term as 'big brother watching', to my mind, is an effort to keep the machinery motivated to achieve more," says a Bharatiya Janata Party general secretary who does not want to be named.

"This efficiency is needed if we have to achieve our vision of the 21st century belonging to India. I believe the changes have been taken in a positive spirit," adds BJP Secretary Shrikant Sharma.

Meanwhile, de-cluttering of offices, one of Modi's first instructions, has also become the task of bureaucrats who have to maintain a daily report on the number of garbage bins cleaned and cupboards cleared.

The report is sent to the PMO once a week. 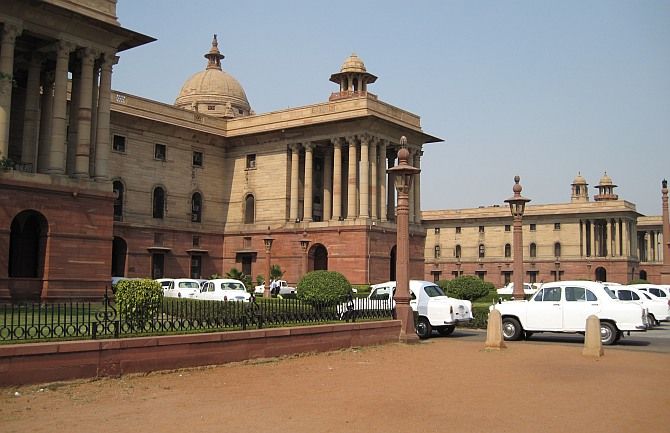 That apart, bureaucrats these days are also busy preparing a 7 to 8-minute video clip on the 100 days of their respective ministries under the Modi government -- an order that came from the PMO.

Not many are sure how all this will help increase productivity.

As an official from the information service says, "These are early days yet."

Narendra Modi may have moved to New Delhi, but life for bureaucrats in Gujarat hasn't changed much under Anandiben Patel, the new chief minister of the state.

Modi was known for his exacting schedule and pace. Like Modi, Patel is also a no-nonsense administrator and a strict taskmaster known for speedy decision-making.

"She is keen to maintain the pace (set by Modi) and is holding regular meetings with senior bureaucrats," says an official posted at Gandhinagar, the state capital.

After she assumed charge, Patel had to deal with a sort of power vacuum given that Modi took with him a handful of bureaucrats from Gujarat to New Delhi.

She started by holding detailed one-on-one meetings with senior bureaucrats in her office about the state of affairs. Perhaps, to demonstrate her clout over the administration, she recently transferred around two dozen bureaucrats within the state ahead of the Vibrant Gujarat Summit.

Bureaucrats, however, feel that Patel is less keen on micro-managing affairs, unlike her predecessor who used to closely and relentlessly monitor every task assigned.

She is also likely to give more freedom to bureaucrats. And, the long working hours have eased a bit now.
Sanjeeb Mukherjee, Archis Mohan, Vrishti Beniwal & Veenu Sandhu
Source: