Given the controversy over the Uttar Pradesh government's population control policy, Hemant Shivsaran/Rediff.com digs deep to find out how many children BJP legislators in UP have. 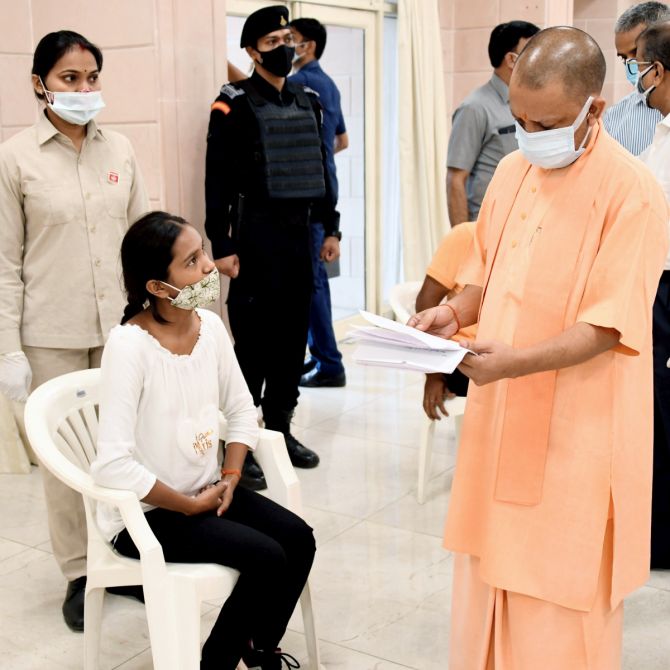 The draft population control bill announced by the Bharatiya Janata Party government in Uttar Pradesh has led to an uproar.

According to the proposal, those having more than two children will be debarred from contesting local bodies polls, applying for government jobs or receiving any kind of subsidy, and from promotions in government jobs.

A draft of the Uttar Pradesh Population (Control, Stabilization and Welfare) Bill, 2021, has been uploaded on the state law commission Web site and suggestions have been invited from the public till July 19. The legislation will come into force after one year from the date of publication in the gazette.

Simultaneously, Chief Minister Ajay Mohan Bisht unveiled the Uttar Pradesh Population Policy 2021-2030 that aims to 'bring down the gross fertility rate among women to 2.1 by 2026 and to 1.9 by 2030'.

Besides seeking to achieve population stabilisation and reduce preventable maternal and infant deaths, the UP Population Policy also aims at preventing the death of children under the age of 5 years and improving their nutritional condition.

The population policy and the draft bill for population control have become a political flashpoint in UP where assembly elections are slated to be held by March.

The 40-page policy document mentions that 'attempts would be made to ensure there is a population balance among various communities in the state. Extensive campaigns would be run in communities, groups, and geographical areas where fertility rates were higher.'

The moves have met with pushback not just from Opposition parties like the Samajwadi Party and the Congress, but also from the Vishwa Hindu Parishad, which, like the BJP is part of rhe Sangh Parivar.

In a letter to the state law commission the VHP said 'Different communities respond differently to incentives or disincentives related to family planning and contraception'.

VHP International Working President Alok Kumar said in the letter that it was 'concerned about the Hindu population contracting whereas other communities are expanding.'

'The Total Fertility Rate of Hindus in states like Assam and Kerala has declined far below the replacement rate of 2.1, but that of Muslims is 3.16 in Assam and in Kerala, it is 2.33.

'In these states, one of the communities has thus entered the contraction phase while the other is still expanding,' the VHP letter stated.

Given the controversy, Hemant Shivsaran/Rediff.com dug deep to find out how many children BJP legislators in UP have.