'The military aim in a future conflict, if it can't be avoided, should be to cause maximum damage to the adversary's war waging capability and capture limited amount of territory as a bargaining counter,' says Brigadier Gurmeet Kanwal (retd). 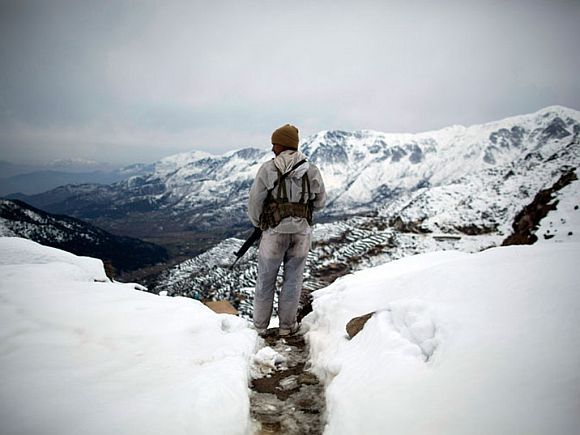 The foremost challenge for India to ensure peace and stability in the Indo-Pacific will be to manage the rise of a militarily assertive China that is seeking to achieve a 'favourable strategic posture'.

Having come close to completing its four modernisations, China has discarded Deng Xiaoping's 24-character strategy to 'hide our capacity and bide our time' and has begun to flex its military muscle.

China senses the emergence of a security vacuum in the Indo-Pacific and is rushing to fill it.

India must join the US and other strategic partners, such as Australia, Japan, Singapore, South Korea and Vietnam, to establish a cooperative security framework for peace and stability in the Indo-Pacific, for the security of the global commons and to deal with contingencies like those described below.

If China is willing to join this security architecture it should be welcomed.

With its proclivity for solving territorial disputes by using military force and its growing military power, China may behave irresponsibly somewhere in the Indo-Pacific, including against India.

China could decide to intervene militarily in the South China Sea, or to occupy one or more of the disputed Senkaku/Diaoyu islands or decide to resolve the remaining territorial disputes, like that with India, by using military force.

Its rapid economic growth, now slowing, has been fairly uneven and non-inclusive. There is a deep sense of resentment against the leadership of the Communist Party for the denial of basic freedoms.

The discontentment simmering below the surface could boil over and lead to a spontaneous implosion that may be uncontrollable.

The recent crash of Chinese stock markets and continuing volatility also point to the possibility of a meltdown.

Both the contingencies -- implosion and military adventurism -- have a low probability of occurrence, but will be high-impact events with widespread ramifications around the Indo-Pacific should either of them come to pass.

Both contingencies will shake up the markets, result in millions of refugees and lead to a bloodbath.

India and its strategic partners will need to cooperate closely to deal with the fallout and to manage the disastrous consequences as either of these contingencies unfolds.

In this context, the India-US strategic partnership makes eminent sense as a hedging strategy for both countries.

In more senses than one, it is India's 'principal' strategic partnership, as then prime minister Manmohan Singh had described it. His predecessor, then prime minister Atal Bihari Vajpayee, had gone further and had said that India and the US were 'natural allies'.

Whichever term is used to describe the relationship, clearly, the US cannot be expected to pull India's chestnuts out of the fire, and vice versa.

Only when the vital national interests of both are threatened will the two countries come together and act in concert.

Defence cooperation, a key component of the strategic partnership, must be enhanced to take it to the next higher trajectory to enable the two countries to undertake joint threat assessment; contingency planning for joint operations; sharing of intelligence; simulations and table-top exercises -- besides training exercises with troops; coordination of command, control and communications; and planning for operational deployment and logistics support.

All of these activities must be undertaken in concert with India's other strategic partners in Asia.

The growing China-Pakistan nuclear warhead-ballistic missile-military hardware nexus is a matter of concern.

China is now engaged in developing the China-Pakistan Economic Corridor to link Xinjiang with Gwadar on the Makran coast as part of its One Belt, One Road initiative to counter the US influence in the Indo-Pacific.

China has vetoed several resolutions in the UN sanctions committee aimed at censuring Pakistan and designating Pakistani extremist leaders as terrorists. China tends to forget that it is itself a victim of terrorist activity that has its roots on Pakistani soil.

Elsewhere in Southern Asia, China is vigorously pursuing its strategic encirclement of India by making inroads into each of India's land neighbours and through the acquisition of port facilities for the PLA navy to operate, as part of its string of pearls strategy in the northern Indian Ocean.

While China is too large to be effectively contained, India can and must raise the cost for China. India should do this through political and diplomatic means and through pro-active defence cooperation with its strategic partners.

Because of its claims over the South China Sea, China has been objecting to India's ONGC prospecting for oil and gas within Vietnam's territorial waters.

Future ONGC operations should be backed up with support from the Indian Navy by way of providing point defence to offshore oil installations and conducting maritime patrolling in the South China Sea jointly with the US and other strategic partners.

Vietnam has often expressed an interest in Indian weapons systems. These must be provided on soft loans, including ballistic missiles that do not violate MTCR guidelines such as the BrahMos supersonic cruise missile, Prithvi I and II and Prahar SSMs. The indigenously-designed and manufactured Pinaka MBRL should also be provided.

Initial batches of these weapons systems could be gifted and training teams sent to provide in situ training assistance. Notably, the US recently lifted its 50-year old embargo on the sale of arms to Vietnam.

Afghanistan has given India a wish list of weapons and equipment in accordance with the provisions of its strategic partnership with India. So far India has given only non-lethal defence equipment, including a few utility helicopters.

The other items required by the ANSF in order to improve combat capability should also be provided. The training assistance being provided to the ANSF should be stepped up by an order of magnitude.

If invited to do so by the Afghan government, India should be prepared to train ANSF personnel inside Afghanistan. The Indian training teams should be self-sufficient and capable of organising their own local security, including limited counter-terrorism measures.

The trilateral agreement with Iran and Afghanistan for India to develop the Chabahar port and link it with the Zaranj-Delaram highway, built by India in Afghanistan, to gain access to the Central Asian Republics and beyond to the CIS countries is a positive development.

It will also provide a suitable route for logistics support should India be called upon to send an infantry division to Afghanistan to support ANSF operations if it becomes necessary.

Similarly, India should reach out to Bangladesh, Bhutan, the Maldives, Myanmar, Nepal and Sri Lanka and the countries on the Indian Ocean littoral in order to minimise the negative impact of the overtures being made by China to them.

As for hard power, India must maintain continuous vigil over the frontiers and carefully note Chinese and Pakistani activities across the disputed boundaries. Surveillance technology should be exploited to add to human vigilance.

From the efforts being put in to develop infrastructure along the land borders, including the refurbishment of advance landing grounds (ALGs) in Arunachal Pradesh and Ladakh, and the raising of new forces, it is clear that army and the air force are gradually pivoting to the mountains.

The raising of potent forces like the 17 Corps, popularly called the Mountain Strike Corps, will help to upgrade the quality of India's deterrence. Two additional divisions (56 and 71 Mountain Divisions) have been raised recently for defensive operations in Arunachal Pradesh.

Similarly, one Strike Corps out of three in the plains and one additional infantry division with high altitude air assault capability need to be placed on high alert to counter aggression.

The addition of new combat capability in the mountains, particularly the ability to launch and sustain offensive operations across the LAC, will send an appropriate signal to China.

The ability to launch offensive operations into Chinese territory will upgrade India's military strategy against China from dissuasion to deterrence.

The essence of India's military strategy should be to deter war, but if war is thrust on India, to fight synergised tri-Service operations and ensure that conflict termination takes place on favourable terms.

The military aim in a future conflict, if it cannot be avoided, should be to cause maximum damage to the adversary's war waging capability by kinetic means and to capture limited amount of territory as a bargaining counter.

Brigadier Gurmeet Kanwal (retd) is Distinguished Fellow, Institute for Defence Studies and Analyses (IDSA), New Delhi.
This is an excerpt from The New Arthashastra: A Security Strategy for India, Edited by Gurmeet Kanwal, with the kind permission of the HarperCollins Publishers India Limited. 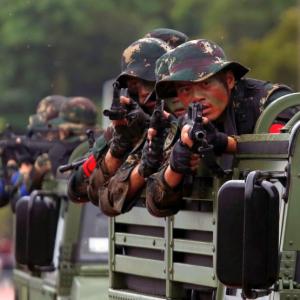