'Extravagant new promises can buy him time, but far from solving the problem, they compound the risk.'
'His main alternative is to stress not aspirations, but resentments.'
'He has already de-emphasised aspirational appeals: Nothing has been heard for over two years of the coming of achhe din,' points out James Manor.
An exclusive extract from Majoritarian State: How Hindu Nationalism Is Changing India

First and strangely, since he comments constantly on many issues, he has remained silent for long periods.

Second, he has then made vague, 'roundabout' or mild comments about outrages, as when he described the widely reported murder of a Muslim as 'unfortunate'.

Such remarks do little to curb brutalities, and he sometimes adds qualifying comments that undermine these statements.

Third, after many months when his silence appeared to imply approval, he specifically condemned violence by cow devotees -- but only against Dalits, not Muslims.

His eventual criticism of assaults on Muslims in June 2017 only came after securing his election victory in Uttar Pradesh, after that New York Times condemnation threatened his international image, and as rival parties planned loud protests in Parliament.

But even these belated comments were undermined by a fourth tendency: Sly remarks suggesting continued commitment to religious polarisation, more blatant provocations such as the communalist rhetoric that he used in the Uttar Pradesh state election campaign,100 and the appointment there of Adityanath. Finally, during the state election in Gujarat, he largely abandoned references to development and offered a toxic combination of 'communal poison' and 'unhinged conspiracy theories' -- alleging that Pakistan was seeking to influence the result, and that opponents' actions were 'bordering on treasonous'.

That marked a change from an earlier pattern of encouraging efforts by Hindu zealots to keep communal antipathy 'simmering' but on a low boil, lest atrocities make BJP governments appear unable to maintain order. That was often difficult to achieve.

Many extremists believe that they need not restrain themselves now as when the more moderate Atal Bihari Vajpayee led the BJP.

He would have been embarrassed by the atrocities listed above, and by the glorification of Godse, Gandhi's assassin.

But as one BJP leader tellingly stated, 'Unlike Vajpayee, Modi personifies the Hindutva ideology. You cannot embarrass Modi by using... Godse.'

Many militants believe that Modi's long silences imply that beatings and murders have the blessing of higher authority.

They disregard his occasional criticisms as statements that a prime minister must make. 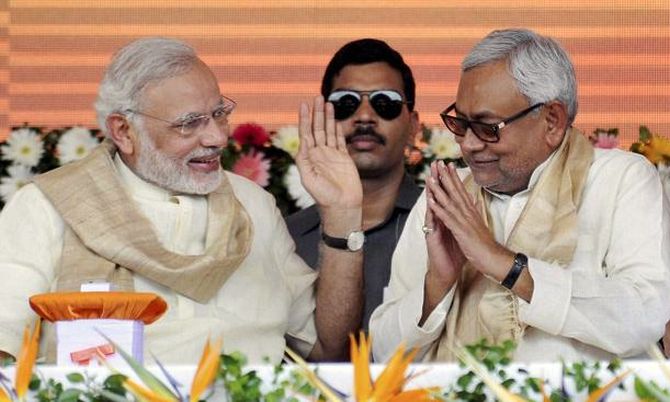 This is especially true in BJP-ruled states where most outrages occurred. In Bihar after the BJP was drawn into the state government in 2017, vigilantes using a WhatsApp network that included a local policeman, beat a Muslim 'on suspicion' of transporting beef -- claiming that they had 'our own government now'.

Modi's silences, his early complaint about vigilante violence against Dalits but not Muslims, his long delay in criticising attacks on Muslims, and his blatant communalism during recent state election campaigns strongly suggest that he shares the views of the extremists.

That impression is reinforced by an astonishing foreign policy decision. He left India isolated by echoing the Myanmar regime's grotesque description of the (Muslim) Rohingyas as terrorists -- an especially egregious example of victim blaming.

His actions may also be partly motivated by 'fear... [of ] the serious risk of being outflanked from the right' by extremists whom he and associates 'have unleashed' but 'can no longer control'.

That partly explained his hardline approach as chief minister of Gujarat, where he successfully saw off challenges from the right.

What of the BJP's longer term prospects at achieving and sustaining hegemony? We must consider the role of communal polarisation since it will remain a major theme, but let us begin with two other issues.

Since its 2017 victory in Uttar Pradesh, the BJP's president Amit Shah has been lauded in India's media as a genius, 'a Colossus'.

But Shah and Modi designed and dominated state election campaigns in Delhi where the BJP was humiliated, and in Bihar where they began the campaign leading in the polls but blundered their way to a thumping defeat.

Shah is working assiduously at organisation building, but he is a genius only some of the time.

Despite many strengths, the BJP's organisation often lacks the capacity to penetrate beyond cities and below the district level.

It is especially frail in several important states: West Bengal, Andhra Pradesh, Telangana, Tamil Nadu and Kerala -- where other parties are formidable.

Many rival parties look bereft at the time of writing. But Opposition parties have often revived unexpectedly because of disappointing performances by ruling parties.

The BJP has inserted RSS leaders without experience of the complexities of governing as chief ministers in several states.

This has led to severe problems in Gujarat where the initial appointee had to be replaced, and in Haryana.

The BJP may also find that after constructing multi-caste coalitions during election campaigns, the groups which take control after victories shatter those alliances.

One glaring example is Uttar Pradesh where Thakurs have mounted many violent attacks on Dalits who voted for the BJP in substantial numbers in the 2017 state election.

From aspirations to resentments

By stimulating them with what turn out to be 'tall promises', Modi incurs popular disillusionment over the longer term.

Extravagant new promises can buy him time, but far from solving the problem, they compound the risk.

His main alternative is to stress not aspirations, but resentments. He has already de-emphasised aspirational appeals: Nothing has been heard for over two years of the coming of achhe din.

But as he stokes resentments, Modi faces a painful irony. Since the BJP now rules in New Delhi and most states, rival parties can no longer be blamed.

The very success of the BJP ensures that it will be the main focus of popular discontent over unfulfilled promises and poor government performance.

As he shifts from aspirations to resentments, Modi is left with only one main target: Religious minorities, especially Muslims.

That is another dangerous game -- dangerous to social cohesion, but also to the BJP.

If citizens become angry over joblessness, farmers' problems and other thwarted aspirations -- year after year when the BJP holds power -- can they really be expected to see Muslims as the culprits? That is as implausible as Modi's blaming Pakistan for railway accidents.

Indian voters are highly sophisticated. They have thrown out most state and central governments since 1977. Stoking resentments may ultimately scuttle the BJP's drive for hegemony. Communal polarisation over the longer term

Preliminary findings from a reliable recent survey in four states found that polarisation has -- despite some ambiguities --influenced popular perceptions.

More than one-third of Hindu respondents have a Muslim close friend, but in three states, Muslims are considered less patriotic than other religious groups.

And while most respondents see Muslims as peaceful, a third of them perceive them as mostly violent. Majoritarian attitudes predominate strongly over liberal views.

But over the longer term, will communal polarisation -- which Modi increasingly stresses -- help to achieve and then sustain hegemony? This is dubious.

Across much of India, communalism has found little traction. The BJP has won re-election in several states not by polarising but by governing adroitly, pursuing development and maintaining public order which extremist outrages disrupt.

Many on the Hindu Right nonetheless welcome and provoke clashes with minorities to sow communal enmity.

But these tend to be useful to Modi only as long as they keep tensions on a low boil.

It is difficult to prevent extremists from going too far. Where the BJP governs, this can alienate many voters because the authorities appear not just unable to maintain order, but even complicit in the brutalities. The BJP's drive for hegemony, in which communal polarisation looms large, faces one last massive impediment.

Indians have a diverse array of identities available to them: National, regional, sub-regional, linguistic, class, urban/ rural and gender identities --plus three kinds of caste identities, and not just broad religious identities (Hindu, Muslim, etc) but narrower sectarian identities within each religion.

Many of these identities cut across and undermine one another. And crucially, polls over recent decades show that people tend to shift their preoccupations from one identity to another, and then another, in response to recent events -- often and with great fluidity.

They do not fix tenaciously upon one identity. So tension and conflict do not build up along a single fault line in society.

This is bad news for leftists who focus on 'haves' versus 'have-nots', and for the Hindu Right which foments enmity between Hindus and minorities.

Sustaining communal polarisation will be excruciatingly difficult --and on past evidence, impossible.

The BJP has achieved dominance by winning elections against incumbent governments, and by appealing to popular aspirations.

Hereafter, it will usually be the incumbent, and aspirations are being overtaken by disappointments.

Ironically, the same theatrics that swept the BJP to dominance by stimulating aspirations can become a liability.

The performance of Modi's central government has been disappointing on many fronts, and has turned his most inspiring pledges into 'tall promises'.

To sustain the drive for hegemony, Modi must overcome these daunting problems. He needs to adjust his grand narrative.

His limited repertoire leaves him with one toxic option -- shifting emphasis from aspirations to resentments.

But can Muslims and allegedly seditious forces be credibly blamed for unemployment, mass poverty, the agrarian crisis, etc.

India's voters are too canny to accept such patent implausibilities for long. Polls indicate that many currently harbour suspicions of minorities.

But given decades of voters' fluid shifts among their multiple identities, this recent sentiment is likely to wane amid the next mood swing.

Modi's drive to achieve and then sustain hegemony is open to serious doubt.

Professor James Manor, an astute and long-time observer of Indian politics, is the Emeritus Professor of Commonwealth Studies, University of London.

Excerpted from Majoritarian State: How Hindu Nationalism Is Changing India, edited by Angana P Chatterji, Thomas Blom Hansen and Christophe Jaffrelot, with the kind permission of its publishers, HarperCollins India.