HAL's HTT-40 comes in from the cold

Seven years ago, an IAF chief had ordered the HTT-40 to be removed from the Yelahanka air base.
The IAF now wants HAL to build 108 HTT-40 aircraft.
Ajai Shukla reports. Overshadowed by the spotlight on the Indian Air Force ordering 83 Tejas Mark 1A fighters was the IAF's request for proposal to Hindustan Aeronautics Limited for building up to 108 indigenous HTT-40 basic trainer aircraft.

Ironically, the IAF's deputy chief handed over the request for proposal on the tarmac of the Yelahanka air base at precisely the spot where, in Aero India 2013, then IAF chief, Air Chief Marshal Norman Anil Kumar Browne, had ordered a displayed HTT-40 to be removed, dismissively stating: 'There is no need for this aircraft.'

As the HTT-40 has advanced swiftly through its development cycle, Browne's successors gradually accepted this indigenous basic trainer.

Meanwhile, the IAF began experiencing difficulties with maintaining the Swiss Pilatus PC-7 Mark II basic trainer, which Browne had wanted more of instead of the HTT-40.

'The HTT-40's request for proposal has come within six years from the first flight... which is the shortest time-line in (India's) aircraft industry,' stated a defence ministry release.

The current IAF chief, Air Chief Marshal Rakesh Kumar Singh Bhadauria, is a strong supporter of indigenous aircraft such as the Tejas and the HTT-40.

IAF pilots are already flying in the HTT-40 to assess its capabilities under what is called 'User Assessment Technical Trials'. 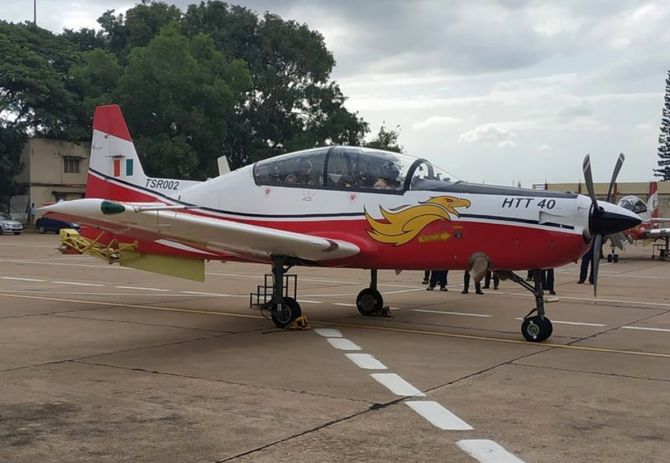 The IAF's request for proposal is for 70 HTT-40 trainer aircraft with a provision for 38 more. Defence ministry sources indicate that it is possible that the 38 follow-on option trainers could be a weaponised version of the trainer, offered to the IAF as a light attack aircraft. It could also be marketed as such in the export market.

HAL has funded the HTT-40 programme entirely from its internal funds. It is understood that the HAL board sanctioned, over the years, about Rs 600 crore (Rs 6 billion) for the basic trainer's design and development.

Besides those costs, the money has also paid for two prototype aircraft and 550 test flights.

The issue of a request for proposal unlocks the door for HAL to begin contracting for engines for the basic trainer.

The engine selected is the Honeywell TP331-12B, which is almost identical to the Honeywell engine that HAL already builds in Bengaluru for the Dornier 228 aircraft that it manufactures in Kanpur.

HAL intends to transfer technology from Honeywell to build the HTT-40's engine in the same production unit.

Sources indicate that HAL will buy close to 130 Honeywell engines -- 108 for the trainers ordered and 22 spare engines. Each of the prototype engines have cost almost Rs 7 crore.

HAL sources say the HTT-40 is in the final stages of spin trials, the make-or-break capability demonstration for a basic trainer. Production planning for building the trainer is already under way.

The HTT-40 is a propeller-driven, turbo-prop aircraft for 'Stage-1' training of rookie pilots.

Those selected to fly fighter aircraft move on to 'Stage-3' training on the Hawk advanced jet trainer.