In the first big shock in the Gujarat election, Congress leader Narahiri Amin, a former BCCI vice-president, will join the BJP on Thursday. Sheela Bhatt asked him why he had decided to do so.

Gujarat Chief Minister Narendra Modi has staged a coup of sort by winning over Amin, a powerful leader of the Patels community in Ahmedabad. In the next weeks, Amin will bne Modi's card to counter the Keshubhai Patel-led Gujarat Parivartan Party's propaganda that "Modi is anti-Patel."

Amin, a former vice-president of the Board of Control for Cricket in India, will be given a higher position in the Gujarat Cricket Association and the Ahmedabad District Co-operative Bank, a powerful bank with a high-profile presence in the city.

Amin's exit reveals that groupism in the Congress will take its toll in this election, too. Amin belongs to the Chimanbhai Patel-Janata Dal(Gujarat) group. In the early 1990s, he served as deputy chief minister.

When Chimanbhai Patel dissolved his Janata Dal(Gujarat) party and joined the Congress, his supporters were not fully assimilated in the Congress due to a caste bias.

The Congress has never recovered after it absorbed the Janata Dal-G and former BJP rebel Shankarsinh Vaghela and his supporters.

For the last 20 years former Janata Dal-G leaders in the Congress have been at loggerheads with the Kshatriya-Thakur-minority-dominated "original Congress."

"What is the Congress's future?" Amin asked. "Today, Shankarsinh Vaghela has declared that he will be the Congress's chief minister. Do you think thje Patels will vote for the Congress now?"

Amin, a multi-millionaire who is involved in numerous caste-based institutions, schools and the Gujarat cricket administration, is in agricultural and finance businesses as well.

He revolted against the Congress for not giving him a ticket to fight the assembly election.

Amin told Rediff.com, "The Congress is in the hands of a few people. Rahul Gandhi, C P Joshi, Mohan Prakash, Ahmed Patel, Shaktisinh Gohil and Arjun Modhwadia have decided on all the 182 seats. Once again, our leaders are plotting to defeat each other. They have made a mess of the Congress's improving fortunes. Like 2007, the Congress will lose both the election and prestige."

"I met Rahul Gandhi and Ahmed Patel last week," Amin said. "Rahul asked me many questions. He enquired why is the Congress unable to win in Gujarat? What should the Congress do?"

Amin says he failed to get his party's nomination because a few leaders fixed the parameters for giving tickets for the election.

"At many places these criteria were not followed," Amin complains. "Only in my case was it followed. I explained to Rahul Gandhi that I lost the last two elections because the 2002 election was conducted immediately after the riots, and the 2007 election was fought on the issue of terrorism. As a Congressman my position was vulnerable."

He said he also explained to Rahul Gandhi why he lost badly in the 2007 election, saying, "Out of 45 plus urban seats in Gujarat only 3 Muslims and one Dalit won on Congress tickets. In a rare victory, Shaktisinh Gohil won in Bhavnagar. But, in urban areas, the upper class, including the Patels, voted largely in favour of the BJP. The urban upper class, where I live, is staunchly with the BJP."

Amin is set to join the BJP. "There is no alternative to Modi in Gujarat," he said. "He will win 125 seats this time. The Congress will lose badly. Keshubhai Patel is unlikely to get seats. Without a tacit understanding with the Congress he will not win even his own seat."

Asked how he will adjust in a party with a saffron agenda, Amin says, "Modi is working with the minorities. There are more than 125 minorities from the BJP at various levels in Gujarat's local self government. It is not an issue."

Must read: Modi battles for Gujarat 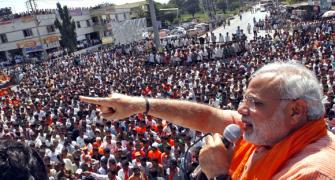 Why Modi will never be Vajpayee for the Muslims
Gangs, 'bhais' may play dominant role in Guj polls 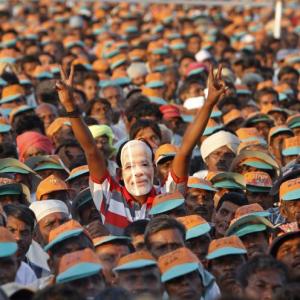