'I'd like to see an India where people will not be afraid of the government.'
Post doctoral students at India's premier institute of science discuss their angst and their hopes with Rediff.com's Archana Masih.

"The most powerful people in a country which has the second largest military in the world, and is one of the 5 nations to have the nuclear bomb are afraid that its students will break up the country."

"I find it unbelievable that modern day political discourse is reduced to what kindergarten kids are taught not to do -- name calling."

"Calling students 'tukde-tukde gang' is carefully constructed name calling. It is small minded bullying. People should laugh at that absurdity rather than feel threatened by it."

Sitting in the canteen at the Indian Institute of Science in Bengaluru, the country's premier institute for science scholarship, the young physicist is deeply troubled with the assault on students and their right to peaceful protest.

"The Citizenship (Amendment) Act is a law intended to discriminate in the most obvious way," says the post doctoral fellow at the International Centre for Theoretical Sciences in Bengaluru who returned to India after obtaining a doctorate in the United States.

He is uncomfortable about disclosing his name, but has taken out time to take part in protests in Bengaluru and on campus against the CAA.

"I spend three quarters of my waking hours doing science. I needed to be a part of this if I had to look myself in the mirror. It affected me deeply on the level of my soul," says the scientist.

The IISc saw a flash protest after the attack on Jamia Millia Islamia students by the Delhi police and sit-ins after masked mobs unleashed violence on JNU students.

IISc students have also organised talks on citizenship and nationalism and are planning more events after the firing incidents on Jamia students.

"The government's job is to enable people to live together, not tear them apart. It is supposed to create spaces to work, live and survive -- this country is struggling and this government is saying you have no right of being. It wants to declare human beings illegal. It is the most bizarre nonsense in the world," says another student who has just completed a PhD and does not wish to be named in this feature.

"The NRC is not going to hit Muslims alone, it is also going to hit the poor unimaginably. It is not only when you don't find your name on that register that your troubles begin, the process itself is going to take such a toll on people," she says.

"It is like the government going against the entire citizenry."

The young man and woman do not wish to take up positions abroad and are looking to begin their professional scientific careers in India. They have a stake in India and want their voices to be heard. 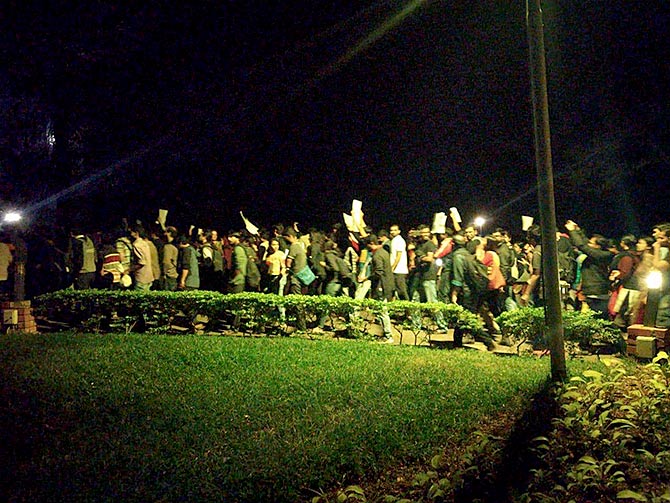 IMAGE: A protest against the Citizenship (Amendment) Act at the Indian Institute of Science.

What prompted students at institutes like the IISc to participate in the protests, they say, was the spirit of solidarity -- student for student.

Neither of them has been to JNU or Jamia or Aligarh Muslim University, but identify with the issues raised by fellow students.

"It affects everyone in the country, including our campus, which has people from different places, cultures and religions. We are all migrants one way or the other," says the post-doctoral student, turning around and taking in the green expanse of the campus behind her.

As students cycle past the tree-lined avenues and people go in and out of the canteen, they animatedly discuss their angst. They are sometimes somber, at times they laugh, but remain hopeful that the protests will not go in vain.

"If we are able to confront the NRC, it is going to be through conversations. People are beginning to have conversations and these conversations are going to make it very difficult for the government," says the young woman who feels economic persecution which forces people to cross boundaries is also a real problem.

"This will lead to students becoming more politically conscious. They are the ones who will set the narrative in future and my hope is that it will be progressive," says the physicist.

"I am sure this age-old Hindu-Muslim binary that has existed for millennia, at some point, people will say we are going to get better than this," he adds.

"The government wants to make CAA protestors about one religion and one set of people so that others feel alienated. It is good that there no single leadership and women and students are in the forefront of the protest," the physicist points out.

"A leaderless organisation is not a bug, but a feature. It does not have to be chaotic, but can be institutionalised into an agreement where several people can get opportunities at leadership."

"Many realise that a spontaneous movement does not necessarily need traditional hierarchical structures like having Brahmin dudes as leaders," he says. "That model has failed and it is high time we experimented a new model of leadership whereby we can have a new way of viewing authority."

As the pushback against the CAA-NRC continues, the students say they believe Home Minister Amit Anilchandra Shah when he says he will not budge an inch on the CAA.

"History shows us that protests don't have immediate results. If the BJP government institutes the NRC, I don't think it will instill a sense of hopelessness, but will intensify the resolve to resist it further," says the physicist.

"If there is enough popular pressure, withdrawing the NRC will be a talking point for future elections."

It is the end of the day and the scholars are eager to get back to their life of academic excellence. As we wait to finish our filter coffees, the conversation drifts towards their hopes for India.

The physicist asks the post doctoral student to go first.

"I'd like to see an India where people will not be afraid of the government some day. Not be afraid of being booked for sedition. If we saw ourselves as a larger whole and were united, maybe this fear would not be there, but for now, this fear is real."

As she looks towards the physicist, he says, "Democracy is the ability to make our lives better by having a say in the policies that change our lives."

"Right now it is reduced to electing 543 people to whom we do this dangerous thing of surrendering all our powers."

"There is a lot of scope of improvement -- do better things for ourselves."