Only 15 people of Indian origin have won the coveted prize.
Hoping to correct this situation, reports Pallav Bagla, India has embarked on the most intense dialogue with the Nobel Foundation till date. 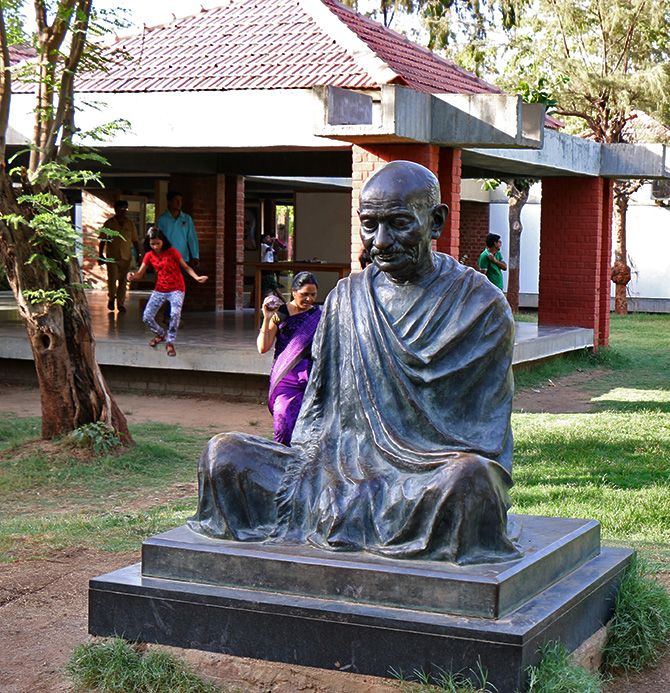 The Nobel Prize is one of the most coveted awards of the world and India's strike rate is abysmally low -- just four Indian citizens have won the award out of the 870 individual winners since 1901.

India accounts for every sixth person who walks on the globe and the number of Nobel Prizes won by Indian citizens amounts to a mere 0.45 per cent for a country of 1.3 billion!

In all, only 15 people of Indian origin have won the coveted prize.

Hoping to correct this situation soon, India has embarked on the most intense dialogue with Nobel Foundation till date.

Towards that there is an effort to expose the younger generation to what it means and how lives have been transformed by thinkers and doers who won the Nobel Prize.

As part of the mega Vibrant Gujarat event held in Gandhinagar, India invited nine Nobel Laureates in science to engage with large audience hoping they would trigger the minds of young Indians to take up a career in science and then push the frontier to bring laurels to the country.

Inaugurating a special exhibition organised by the Nobel Foundation at the Science City in Ahmedabad, Prime Minister Narendra Modi, whose affection for science and technology is well known, gave his own mantra to the youngsters who may hold such aspirations.

Speaking to a largely 5,000-odd young audience, Modi said, "Be inspired and be daring, have courage and be your own person and not imitative. That is how our honoured guests (the Nobel Laureates) succeeded and that is what you should learn from them."

Inspiring words from a charismatic leader who got a rock star welcome from the normally less than effusive scientific community.

"The Laureates represent the peaks of science and you must learn from them. But remember that the peak rises from great mountain ranges and does not stand alone," Modi added.

The Department of Biotechnology and the Nobel Foundation have signed a five-year agreement where annually the Swedish organisation will bring to India about a dozen Nobel Laureates who will deliver talks, meet students in mega fairs and concomitantly an exhibition titled 'Ideas that Changed the World' would be put up to show case the award-winning work.

All in the hope that at least some young minds will be ignited to take up a passionate career in science.

India last won a Nobel Prize in science way back in 1930 when C V Raman got a Nobel in Physics for his discovery of the Raman Effect and since then the prize has eluded Indian scientists.

It is not that Indian S&T has not done well, India is today recognised as the sixth largest powerhouse by way of number of science publications, but the big award has evaded Indian boffins. Some even suggest it is the colour of the skin that mattered.

While the temporary Nobel exhibition housed at the 100-hectare Science City in Ahmedabad for the next five weeks may get a lot of footfalls with the replica of the Nobel gold medal and some original personal artefacts of Wilfred Nobel being on display including the now famous 'dynamite sticks' on which Mr Nobel made his fortunes.

But viewers may not be any wiser on many Indian contributions.

There is just a short video clip on Rabindranath Tagore who won a Nobel in Literature in 1913.

There is absolutely no mention of C V Raman in the Nobel Exhibition even though his path breaking finding are now used to detect bombs and explosives on almost every airport of the world.

Amartya Sen, the 1998 Nobel winner for economics, finds zero mention on all the panels.

Interestingly while there is a whole panel devoted to the world's youngest Nobel Awardee from Pakistan, Malala Yousafzai, there is no mention on the same panel that she shared the Peace award with India's very own firebrand child rights activist Kailash Satyarthi in 2014.

Such omissions are very stark and hopefully in the next four years of the exhibition a special India section would be created as local role models with whom one can relate to are more inspiring than distant foreign achievers.

The Rs 4 crore (40 million) India has spent on the series called 'Nobel Dialogues' would be well spent if India centric suitable additions are made in the coming episodes.

To gloss over suggesting that the exhibits are chosen by the Swedish would be a travesty of justice since as it's said he who pays plays the tune.

Moreover, the Nobel Foundation is also engaging with India for its own benefits as they till now have largely ignored the world's largest democracy.

Some of the people visiting the exhibition also complained that while there was a panel on inventor Guglielmo Marconi and the wireless technology, but there was no mention even by the volunteers in the interactive verbal explanations that India's own J C Bose was slighted in the 1909 award.

Subhash Minda, a physician at the SAL Hospital in Ahmedabad who came with his whole family, said, "This was just not acceptable."

Another irony that could not be overlooked since the Nobel exhibition was being held not far from the famous Sabarmati Ashram was the fact that the Nobel Foundation missed out in bestowing a Nobel Prize to Mahatma Gandhi.

Ironically, one of the panels on display has a prominent mention of 'indigo' the dye extracted from the plant Indigofera tinctoria which led to Gandhi organising his first satyagraha in 1918 that subsequently came to be known as the Champaran Movement.

It is ironical that the Nobel Foundations outreach unit displayed a pair of 'blue jeans' showcasing work on dyes and missed the sensitivity of the Mahatma's aura in his own city.

"I think Gandhi should have won the (Nobel) prize," said Lars Heikensten, executive director of the Nobel Foundation, adding that they have a section on their Web site which says 'Mahatma Gandhi - The Missing Laureate'.

It is almost unpardonable to have an exhibition in the Mahatma's own home town on the subject 'ideas that changed the world' and ignore displaying anything on 'non-violence', an idea that got India its independence.

Nine visiting Nobel Laureates -- the single largest contingent ever to come as a team to India -- are travelling across the country to inspire Indians through their real life stories on how to succeed and more importantly how to overcome failures but stay the course.

India is rapidly awakening and is no longer a pushover in the world order, there are many Indians who deserve the Nobel Prize, recognise them soon.

Pallava Bagla
© Copyright 2022 PTI. All rights reserved. Republication or redistribution of PTI content, including by framing or similar means, is expressly prohibited without the prior written consent.