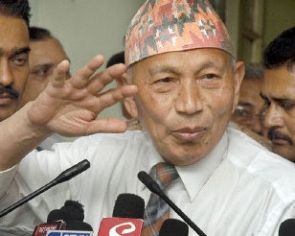 'A master politician who excelled in the politics of intrigue, Subash Ghisingh kept winning election after election, sending a clear message to the state and central governments that he remained the undisputed king of the Darjeeling hills.'

Swaraj Thapa pays tribute to the principal architect of the Gorkhaland movement, who passed into the ages last week.

An era in the turbulent politics of the Darjeeling hills -- marked by unprecedented violence in the mid 1980s which captured the nation's attention as it took place in a region otherwise known for ever smiling and peace-loving people -- has come to an end with the demise of Subash Ghisingh, principal architect of the modern Gorkhaland movement.

Ghisingh passed away last week at a Delhi hospital after suffering multiple ailments, leaving behind an unfinished legacy in the form of the statehood demand for the Darjeeling hills and an unresolved identity crisis faced by Indian Gorkhas that is now being carried forward by his one time protege, Bimal Gurung.

Credited for coining the word 'Gorkhaland,' that probably appealed to him in the backdrop of a stint as an Indian Army soldier in Nagaland, Ghisingh spearheaded the Gorkhaland movement demanding a separate state out of West Bengal.

The Gorkha National Liberation Front party that he founded in 1980 had a head-on confrontation with Communist Party of India-Marxist cadres and the might of the Left Front government headed by then chief minister Jyoti Basu, resulting in one of the bloodiest pro-statehood movements in India's history.

At least 1,200 people are known to have died in the violence between 1986 to 1988 -- most of them GNLF and CPI-M cadres. The Left Front government even dubbed it an anti-national movement in the bid to quash it.

Ghisingh's endeavour was backed by the then Rajiv Gandhi-led Congress government at the Centre, which actively indulged in political machinations with the objective of uprooting Communism from West Bengal.

Research and Analysis Wing and Intelligence Bureau officials regularly interacted and advised Ghisingh on political moves to counter the security apparatus of the state government. But the prolonged violence that followed compelled the Centre to change track and come to a compromise with the Jyoti Basu government.

Ghisingh, by then leading the most popular pro-state movement and even attracting international attention, was consequently forced to accept a 'state within a state' formulation comprising of an autonomous administrative unit -- the Darjeeling Gorkha Hill Council.

The tripartite political agreement between the Centre, West Bengal government and GNLF, however, stood out over his stand of dropping the demand for a separate state, prompting discontent and disenchantment in the Darjeeling hills.

Senior Congress leader Mani Shankar Aiyar told me last year that as a senior functionary in the then Prime Minister's Office headed by Rajiv Gandhi, he was one of the behind-the-scenes architects of the Darjeeling Gorkha Hill Council accord and had patterned it along a similar administrative unit devised by the Indian government for Tamil populated areas in Sri Lanka.

Ghisingh was an utter failure as an administrator even though he was a skilled politician and a master orator in Nepali -- the language spoken in the Darjeeling hills -- which catapulted him to the position of undisputed leader of Indian Gorkhas for over two decades until his hold was successfully challenged by Bimal Gurung in 2007.

Though he held sway over the Darjeeling Gorkha Hill Council for almost two decades, his rule was marked by ad-hocism, maladministration and corruption.

The hard bargaining that he drove as a mass movement leader with the Left Front government soon receded as he found himself lost in the ocean of governance.

In return for his silence on the statehood issue, the Left Front turned the other side when it came to auditing Darjeeling Gorkha Hill Council funds spending. When Uttarakhand, Chhattisgarh and Jharkhand were formed in 2000, Ghisingh chose to remain mum, saying the climate was not suitable to comment on the issue.

A master politician who excelled in the politics of intrigue, Ghisingh kept opponents at bay using political machinations and even muscle power. He kept winning election after election by making open ended statements in speeches, which could be intrepreted in any manner.

He even invoked religion and superstition to keep the people mesmerised, while sending a clear message to the state and central governments that he remained the undisputed king of the Darjeeling hills.

It was only when Bimal Gurung broke ranks to form the Gorkha Janmukti Morcha in 2007, that Ghisingh's monopoly was unfastened and he was forced to flee the hills. The last few years were undoubtedly tormenting for Ghisingh as he shuffled initially from one rented house to another in the foothills of Siliguri, Jalpaiguri and Matigara and subsequently hobbled in and out of hospitals, finally to pass away in one at the age of 79.

Ghisingh first gave voice to the Indian Gorkhas by raising the issue of their identity and inclusion within the national mainstream and linking it to the demand for a separate state of Gorkhaland.

Even Bimal Gurung, otherwise his political foe, lauded his contribution by commenting on his official Facebook post that 'The sad demise of Subash Ghisingh is a political loss to the hill people. His contribution towards development of the hills will always be appreciated.'

Ironical as it may seem, the GNLF party which he founded, now faces an identity crisis. Authoritarian and mistrustful, Ghisingh never created a second line in his party.

In the wake of his demise, it remains to be seen where the party that he founded and held sway in the Darjeeling hills for over two decades, will end.

Swaraj Thapa is a former Delhi-based political journalist, who is presently principal advisor to the Gorkhaland Territorial Administration in Darjeeling.