Explained: Why Aaditya Thackeray is contesting the polls

Why Aaditya Thackeray's decision to plunge into electoral politics is significant.

Aaditya Thackeray, Shiv Sena chief Uddhav Thackeray's elder son, is doing what no other Thackeray has done in 53 years of the party's existence.

He will contest the Maharashtra assembly election from the Worli constituency in central Mumbai.

Shiv Sena founder Bal Thackeray -- Aaditya's late grandfather -- ruled the party and state administration -- when the Sena was part of the Maharashtra government in alliance with the Bharatiya Janata Party in 1995 -- without being part of the state or central government.

After the first Sena-BJP government was formed, the Sena supremo often quipped that he ruled the state with a 'remote control' in his hand.

After Bal Thackeray's death in 2012, his youngest son Uddhav took over the party's reins. Uddhav too has never contested an election. He did not become part of the government after the BJP-Sena combine formed a second government in 2014 with the BJP's Devendra Fadnavis as chief minister.

Speculation is rife that Aaditya will become the first Thackeray to join the government by taking over as the state's deputy chief minister after the October 21 assembly election, which the BJP-Sena is expected to win decisively. 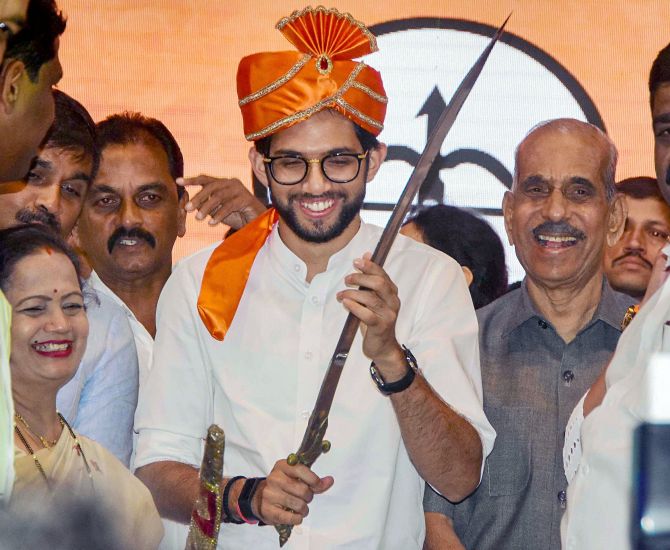 IMAGE: Yuva Sena chief Aaditya Thackeray presented with a sword as he announces his candidature from Worli seat for upcoming Maharashtra assembly elections during a rally in Mumbai. Photograph: PTI Photo

Why Aaditya is contesting the polls

Unlike the other Thackerays, the 29 year old wants to join electoral politics and has always been interested in it.

The Thackerays like to see themselves as kingmakers and believe in controlling the government from the outside.

But the young Thackeray and his influential mother Rashmi Thackeray believe those days are gone and if one wants to change the system, one needs to be 'in' the system by contesting elections.

Being a part of the government, one can be part of making policy and change people's lives.

With his father Uddhav looking after the party, Aaditya believes he can concentrate on electoral politics.

What made Aaditya contest elections

Electoral strategist Prashant Kishor -- who gave Narendra Damodardas Modi a political makeover before the 2014 Lok Sabha election -- is said to be working closely with Aaditya and the Sena.

The Sena has always been a cadre-based party with its grassroot workers and neighbourhood shakhas.

With Kishor's advice and social media, the Sena hopes to grow beyond its traditional Maharashtrian constituency and enhance Aaditya's appeal with cosmopolitan Mumbaikars.

How prepared is Aaditya for electoral politics?

Aaditya heads the Yuva Sena -- the party's youth wing -- and has been participating in key party discussions, like hammering out the vexed electoral alliance with the BJP at his father's side.

Why Aaditya is contesting from Worli

Worli has never been an easy seat for the Shiv Sena to win.

Worli is a stronghold of Sachin Ahir, who previously headed the Nationalist Congress Party's Mumbai unit.

In 2014 though, Ahir lost the election to the Sena's Sunil Shinde, but remains a dominating presence in the constituency.

Two months ago, Ahir was inducted into the Sena, a sign that Aaditya would contest his first election from Worli.

Worli has chawls and high rises cheek by jowl, and with Ahir in the Sena ranks, Aaditya could win the election easily.

How is Aaditya connecting with youth in Maharashtra

In the run-up to the Lok Sabha election, Aaditya hosted an interactive programme Aaditya Sanvad (Connect with Aditya) in several districts of the state.

There is a vacuum of youth leadership in Maharashtra which Aaditya hopes to fill.

The NCP and Congress have no youth leaders to speak of.

The BJP's youngest leader in the state is Chief Minister Fadnavis who is 49. Aaditya -- who was educated at Mumbai's Bombay Scottish school and St Xavier's college, and at ease speaking in English -- is 20 years younger and more likely to connect with millennials than the senior citizen politicians who currently dominate Maharashtra politics.

Like his father, Aaditya is soft-spoken, minus his grandfather's fire-and-brimstone approach to people and politics.

Aaditya has also steered clear of controversy. Though his father has brandished the building of the Ram temple in recent speeches, the son has not mentioned religion or Hindutva -- he is, don't forget, the grandson of the 'Hindu Hriday Samrat' (the emperor of Hindu hearts) -- in any of his speeches.

He talks about the ban on plastic.

He is also a huge advocate of Mumbai remaining open 24x7 which has so far been implemented only in part.

He thinks of the future and how the youth will lead their lives.

The Shiv Sena's junior status to the BJP

This is the current reality which Uddhav understands. Few can withstand the Modi wave at this time.

If the Sena wants to become the number one party in Maharashtra, the Thackerays cannot watch from the sidelines.

They cannot stay away from legislative politics and will have to work from within to re-energise the party.

Nobody gave Uddhav a chance after his father's death. Word on the street was that the Sena would implode.

But Uddhav has cleverly retained his father's winning touch, and the party remains powerful in the state even if the BJP has upstaged it.

Aaditya feels the Sena's time will come and he has to wait it out patiently.

Aaditya has connected well with the city's so-called Page 3 set. So much so that critics accuse him of being more comfortable with Mumbai's glitterati than he is with the Marathi Manoos who form the Sena's spine.

To repel such distracting criticism, he launched the Mauli Samvad (discussion with women) through Marathi actor Aadesh Bandekar.

He also started Pratham Ti (She First) programme with 20 women last month, an event which is catching on.

Voters upset with the BJP's aggressive Hindutva are looking for an alternative, and Aaditya hopes to fit the bill.

What happened to the Sena's Marathi Manoos plank?

More than a decade has passed since the Sena launched a major campaign for the Marathi Manoos.

Raj Thackeray and his Maharashtra Navnirman Sena hijacked that space, but its electoral failures may have taken the fizz out of the MNS movement.

The Shiv Sena's new leadership wants Mumbai's cosmopolitan face to be the Sena's face too.

The future for Aaditya

Aaditya has acceptance for his simplicity, but he has not developed charisma as yet.

Right now simplicity works for him, but what of the future?

If he has a plan to change, he hasn't articulated it yet.