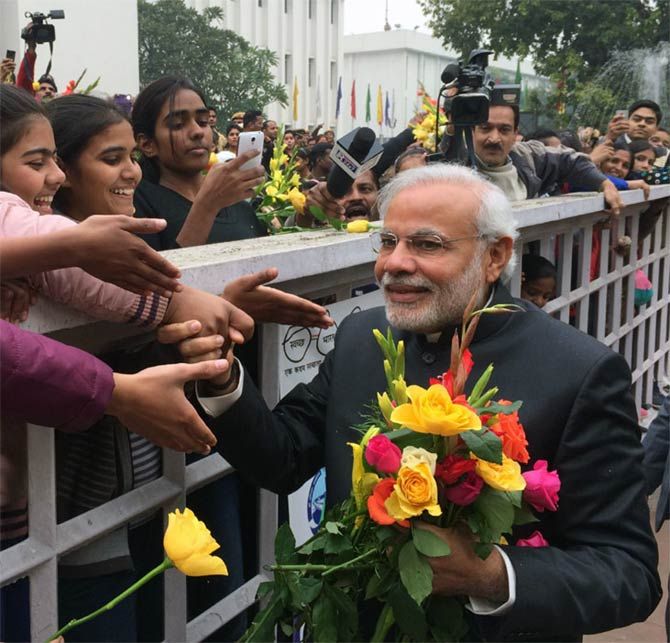 'Modi has been successful in convincing people that from a social point of view, he is closest to Indian citizens.'

'His is a victory of Indian-ness.'

Coming from a political leader belonging to a staunchly rival party, this is one of the most surprising and politically potent compliments that Modi has got since coming to power in May 2014.

Dwivedi is currently a member of the Rajya Sabha and has been an important presence at the Congress headquarters for many decades. He has witnessed the party's ups and downs and understands majority politics and the caste dynamics of north India. He has also handled the media for many years.

Since May 16, 2014, when the Bharatiya Janata Party won a majority in the Lok Sabha bagging 282 seats, Modi has stirred up many old establishments in New Delhi and state capitals. But when someone privy to Congress President Sonia Gandhi and party Vice-President Rahul Gandhi's thinking speaks in this manner, the tone and tenor acquire a different meaning.

Dwivedi, while making an objective assessment for the first time of Modi's 2014 election victory and his rule over the last seven months, tells Rediff.com, "I don't consider the election result of 2014 as Modi and the BJP's victory but it is the defeat of the Congress."

Dwivedi, while providing the logic behind the final outcome of the 2014 election and Modi's current rule, says something profound: "Modi and the BJP have been successful in convincing people that from a social point of view, he is closer to Indian citizens (woh (Modi) aur BJP logo ko samjhaane main safal ho gaye ki samajik roop se woh desh ke nagrik ke adhik nikat hai)."

Dwivedi, who has spent considerable time in analysing his party's disgraceful defeat in the elections, goes one step further in paying the biggest-ever compliment to Modi: "In essence, without spelling out further, in a way this is a victory of Indian-ness (kul milakar bina kahe bole ek tarah se yeh (Modi's ascension to power) Bhartiyata ki jeet hai)." 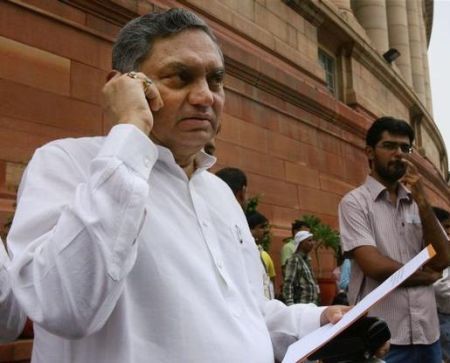 What Dwivedi, left, is saying in essence, without actually spelling it out, is that the Congress government and its leaders were found 'paraaye' (not one's own) by Indian voters.

Not just Dwivedi, but many Congress leaders too privately believe that Modi's language turned out to be more powerful than that of any Congress leader. Sonia and Rahul Gandhi's mother tongue is not an Indian language, and that was exposed in the voters's preference in 2014. Modi scored big due to his campaigning in Hindi.

For the last couple of days Trinamool Congress MP Dinesh Trivedi has been in the news after he praised Modi and his policies while touring Kutch, Gujarat.

Trivedi, along with some other Trinamool colleagues, has shown a clear slant towards the BJP.

But Janardhan Dwivedi is a quintessential Congressman and his thinking and statements should not be seen as part of 'power politics.' Congressmen like Dwivedi may retire, but cannot join any other party. Dwivedi was sharing his view from the premise of Indian voters as they see Narendra Modi.

Certain phrases in Hindi in the report have been modified.