Narendra Modi will be the face of the BJP, the symbol of anti-Congress sentiment and the messiah of the Indian middle class in the general election, reports Sheela Bhatt. 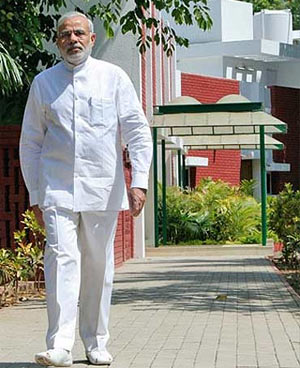 Modi has been placed miles ahead of other BJP leaders by the party's parent organisation, the Rashtriya Swayamsevak Sangh, in the year before the scheduled general election of 2014.

There remains no doubt now that Modi will lead the BJP in the coming election.

He will be the face of the BJP, the symbol of anti-Congress sentiment and the messiah of the Indian middle class in the general election.

The inevitable decision has been taken in view of the Congress plan of arresting its decline by introducing the Food Security Bill soon.

Time is running out for the BJP to put its divided house in order so the difficult decision has been taken now.

There can never be a better time for the BJP to win the next general election. The United Progressive Alliance government is scam-tainted, price rise has angered the common man and the ruling UPA is without leaders and devoid of fresh ideas.

In spite of BJP veteran L K Advani's resistance, the RSS is backing Modi in the larger interest of the saffron brotherhood, the Sangh Parivar.

Now, "there is no looking back for Modi," his confidante told Rediff.com on Saturday night.

When this correspondent asked the BJP leader, who is currently in Goa for the party's national executive meeting, if BJP leaders have cajoled the sulking Advani to accept Modi as the BJP's new leader, the terse reply was," No!."