A scrutiny of the PM's statements in the last 12 weeks lays bare a stunning lack of homework for a policy that has affected each of the 1.25 billion people of India.
Archis Mohan reports. 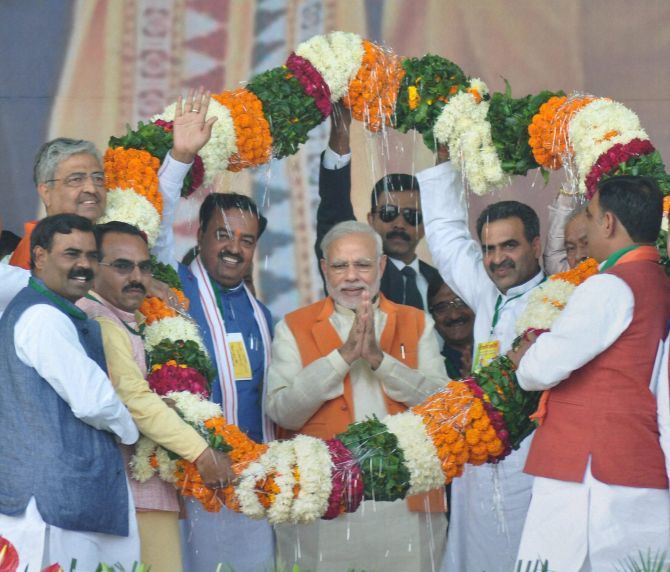 When asked about 'protégé' Narendra Modi, Advani said: 'I don't see Modi as my protégé. I have seen him function as a party general secretary. He is a brilliant event manager.'

Prime Minister Modi's event management skills have been on display since May 26, 2014, the day he took the oath of office, but have stood out in sharper focus in the 50 days since November 8, the day he announced the note ban decision.

Even Modi's most strident detractors concede Indian democracy hasn't seen a communicator of his skill in decades.

Unfortunately, the PM overreached himself in announcing demonetisation without attention to detail, and has had to spend his and his government's political capital in subsequent weeks to keep the narrative in his favour.

That there isn't a political leader to question him, unlike when a stalwart like Jayaprakash Narayan stood against Indira Gandhi in the early 1970s, has helped his cause.

The frequent shifting of goalposts has damaged the credibility of institutions such as the Reserve Bank of India.

The impact on the economy of the note ban decision is likely to be felt over the next two years.

A negative political fallout is likely to push the PM to take ever more audacious gambles.

While the government continues to deliver the people a continuous supply of spectacles -- the visuals of stashes of currency notes being seized and “'black money hoarders' arrested or a gigantic statue of Shivaji in Mumbai -- a scrutiny of the PM's statements in the last 12 weeks lays bare a stunning lack of homework for a policy that has affected each of the 1.25 billion people of India.

In his November 8 address, Modi mentioned destroying 'black money' 18 times and 'fake', that is counterfeit, currency five times, as the rationale behind withdrawal of Rs 500 and Rs 1,000 currency notes.

Not once did he mention 'digital/cashless' in the speech.

But, in subsequent public rallies, references to fake currency became incidental and to 'black money' fewer.

Instead, he extolled the advantages of a less-cash economy and advertised the government's lottery scheme for reward ing people who take to digital transactions.

In another instance of the shifting of goalposts, the initial few speeches had the PM talking about 'gain' after 50-days of 'pain,' and that they should help him build an India of their dreams.

In Belgaum on November 13, Modi even specified that the 50 days ended on December 30. He said the note ban would ensure better education, cheaper medicines for the elderly and jobs for youth.

At a rally in Agra on November 20, the PM was specific about these gains and said banks had received Rs 5 lakh crore in demonetised currency. He said banks would soon give loans at cheaper rates, particularly to the poor.

Modi said the note ban would help fund housing to the rural poor by 2022. Such promises of 'gain' have found no or little mention in his recent speeches, whether in Dehradun or Varanasi.

From promising 'gains' immediately after 50 days, Modi has increasingly spoken about how the 'pain' will start reducing after the '50 days.'

The PM has instead taken to targeting his political opponents, likening them to Pakistan and even pickpockets for opposing the note ban. At a public rally in Kanpur on December 20, he welcomed the Election Commission suggestion to cap anonymous political donations to political parties at Rs 2,000. Currently, the limit is Rs 20,000.

However, the PM seems to have lost interest ever since other political parties said they welcomed the move.

In last year's Budget, Finance Minister Arun Jaitley had eased the rules relating to receiving of political donations from corporates.

There is little consensus on what the note ban decision has achieved economically, but both the PM and the Opposition will spend the next 50 days, in the run-up to the assembly polls in five states, to build a narrative for or against.

The Opposition's strategy is to make a thousand cuts to the PM's credibility.

Once that is dented, or so the Opposition believes, people will see more clearly the ills of demonetisation.

The PM, meanwhile, has portrayed this to be a fight for the rights of the poor.

Until now, people at large have kept the faith and believed in Modi's promise.

Soon, we shall know if Modi can conjure up yet another event to ensure people continue to believe in his leadership.

The next 50 days promise to be extremely interesting. Watch out for a spectacle!