'He treated the President and a poor man the same way'

'His last journey was like putting out the lamps one by one in a temple at night.'
'It was like the soul slowly walking away from the body; it was so pure and peaceful...' IMAGE: Dr Panniyampilly Krishnankutty Warrier, the renowned Ayurvedic physician who passed into the ages on July 10, 2021.

In the field of Ayurveda, there is no one who can take the place of Dr P K Warrier who passed away on the 10th of July at the age of 100.

No adjective can describe what a fine human being he was, and what an exemplary physician he was..

After Dr Warrier took over the reins of the Kottakkal Arya Vaidya Sala founded by his uncle, Vaidyaratnam P S Warrier, he took it to greater heights.

For his contribution to Ayurveda, he was awarded the Padma Shri and Padma Bhushan by the Government of India.

Nothing happened in Kottakkal without Krishnankutty Warrier

As a person born and brought up in Kottakkal, I know that he was the ultimate word in everything in Kottakkal.

Whenever there was a problem concerning any disease, the only thing people used to say, 'Let's show it to Krishnankutty Warrier.

Whenever somebody wanted to apply for a job, they would say, let's take a recommendation letter from Krishnankutty Warrier.

Whatever be the problem, the people of Kottakkal only consulted Krishnankutty Warrier.

He never said 'no' to any of the invitations. He would not only accept all the invitations, he would be the first person to arrive at the venue, much before the organisers.

You can say he followed the practice of the British to be a stickler for time. 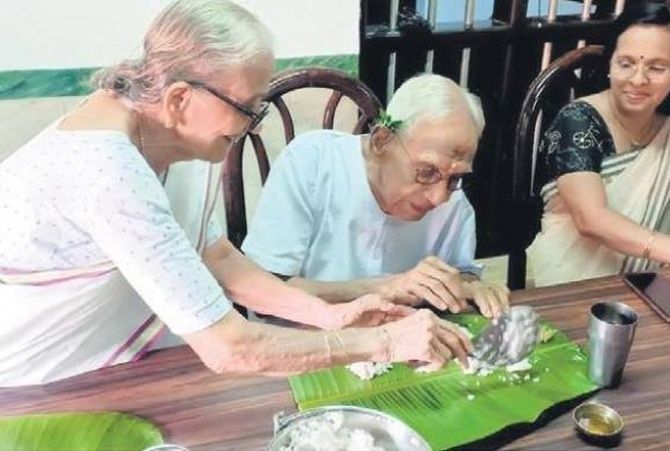 Though he enjoyed driving, in the latter part of his life, he had a driver to take him around.

The practice in Kottakkal was when we bought a new car, we would take it to the temple and then ask him to drive it first, and he would happily do that.

During Navaratri, everybody wanted him to initiate small children into the world of letters.

He would do vidyarambham at the Viswambhara Kshetram within the Arya Vaidya Sala premises.

People belonging to all religions came to the temple to do vidyarambham and also to pray.

To the people of Kottakkal, he was like God! He protected the entire village regardless of caste, creed and religion.

After I was chosen as the Best Outgoing Student at the Kottakkal Ayurveda college in 1976, Dr Warrier called me to his office and congratulated me for the award.

That was the first time I was meeting him at close quarters.

I fell at his feet and asked for his blessings. He picked me up with lots of affection and said, 'Once you finish your studies, you should join Arya Vaidya Sala. We would only be very happy to have you in our team.'

I belong to a very poor family in Kottakkal, and he knew my background.

In the initial days, I was one among the many people who worked there.

After one year, I got attached as a physician in the correspondence department which treated outpatients through letters. Dr Warrier used to go through every letter and scribble the medicines to be prescribed.

Then it was our responsibility to expand on the prescription for the patients.

He would read what I wrote and whenever he saw an error, whether it was a spelling mistake or a mistake in usage, he would call me.

He was very particular that the language used should be professional and perfect, and that it shouldn't create any confusion in the minds of the patients.

He was like a teacher correcting the composition written by his students!

Those were the days when we wrote letters in longhand!

That was how my close association with him started. He used to tell me that a good physician should have not just sound knowledge of the subject but good communication skills also.

When he was the Chief Physician, he wanted an assistant to help him in consulting, to go with him in his travels, writing letters, etc. and luckily, I was appointed as his first assistant.

This gave me the great opportunity to work with him closely and learn so many things directly from him.

I have walked my entire life following in his footsteps. He is my Guru, my master, my God; he is everything to me, mata, pita, guru...

The role of a physician

Though he was a Communist once, as a physician he believed in the idea of God.

He believed that there was a role for God in the healing process, and it should not be binding. He also believed that as physicians, we represented God.

He would tell all of us to learn and work all the time, without any pause.

That was why he didn't want to stop learning or working till his last breath.

In the last few years, whenever I requested him to take a rest for some time, his response would be, 'I am not going to rest. Tell me what is the treatment for weakness? Working. And I want to work till the last day of my life. We should overcome the weakness of the body by working more'. That was Dr Warrier Sir.

Till his death, he knew each patient who was admitted to the hospital.

He used to ask us about the condition of each and every patient and make suggestions in the treatment.

In fact, he had a remote control of everything that was happening here.

He was extremely alert and his memory was much better than ours.

He could recite the appropriate slokas from the Ashtanga Hridaya and tell us references from different Ayurvedic texts which none of us could do.

He could work as a physician and run such a huge institution even at 100 only because of his 'positive' health that was full of positive energy.

He followed the strict lifestyle recommended by Ayurveda, and also a strict time schedule.

Without exception, he would get up by 4 in the morning, did his prayers, exercise, yoga and meditation. Then he went to the temple to light the lamp in front of the founder.

At 6, he would listen to Vande Mataram on the radio.

He also would read Ashtanga Hridaya every day for some time before having his breakfast at 7.30.

His breakfast used to be very light. He had only black coffee or black tea, that too without sugar.

By 8.30, he was at the hospital to take the morning rounds. He would talk to each and every patient patiently.

I had the good fortune to accompany him in his rounds many times. In fact, I wrote a book based on my experience.

After the rounds, he would go to the OPD and saw patients there.

At 1.30, he had his lunch, again very light but nutritionally balanced. 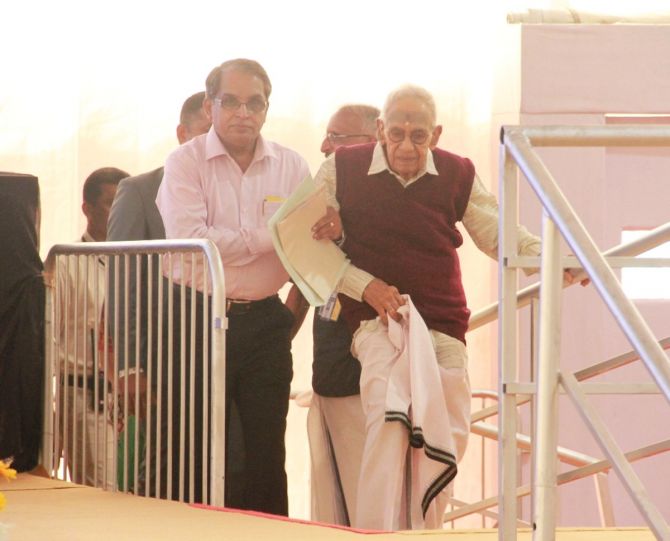 He was never a voracious eater; Ayurveda does not recommend that. But after he turned 75-80, he reduced his intake of food considerably. He used to take plenty of ghee as Ayurveda says the best food for the brain is ghee.

He would tell everyone to start treatment by modifying the diet to an ideal non-spicy, non-oily diet.

He had no ailments; no hypertension, no diabetes, no heart problem. He was 100% healthy at the age of 100.

It was only last year after the pandemic struck that he stopped meeting patients. We had to plead with him not to meet patients.

We didn't want to expose him as he was already 99. So, we used to take the case studies to him, take his prescription and pass it on to the patients.

There were many patients who used to come from faraway places to get the prescription of Dr Warrier, and nobody else's!

I have not seen a more compassionate person than him in my entire life.

Vaidyam happened to be not just a job for him. He was dedicated, compassionate, loving and always ready to surrender himself.

In his entire life as an Ayurvedic physician, he had not accepted a single paisa as consulting fee.

He never wanted any money for himself. He used to say, 'It was my good fortune that I was born in this family and I was chosen as the successor to Vaidyaratnam P S Warrier. When I have this Vaidya Sala to take care of me, why do I need any money for myself?'

He was against luxury. He would say, when people crave for luxury, it makes them greedy for money and power.

He was there at the top all the time, and he was like a lamp that spread light to the entire Vaidya Sala family and the entire Kottakkal village.

But he saw his uncle and elder brother as his gurus. Without paying tributes to both of them, he would not start or end any of his speeches.

Even when he was conferred the Padma Bhushan, he had said, 'This is not mine; this is for my uncle and I am accepting this on his behalf'.

He became a great physician because of Janithakam and jaatakam; janithakam because vaidyam is there in his genes, and then his jaatakam was such that he was destined to be great.

Ashtanga Hridayam tells us that an Ayurvedic physician has to be a good person before becoming a physician, and he was the best example of following the scripture in its true essence.

What made him a great physician was the experiences he had in life and also following what Ashtanga Hridayam said in its fullest.

During his days with the Communist movement, he was exposed to the harsh realities of life, that too at the grassroot level.

So, he understood the pains of the poor. So, he could treat the President of India and a poor man from a village the same way.

Ayurveda describes such a physician as Apoorva Vaidyan (a rare vaidyan).

We have read about such personalities in books, but to me he was real, my Gandhi, my Ramakrishna Paramahamsa, my Vivekananda... my world.

Many of us were next to him when he breathed his last; his last journey was like putting out the lamps one by one in a temple at night.

It was like the soul slowly walking away from the body; it was so pure and peaceful...