'Everyone wants that doctors should fight from the frontlines of the pandemic, but there's no reaction from the government when they fall ill or even die because of it.'
Geetanjali Krishna reports. 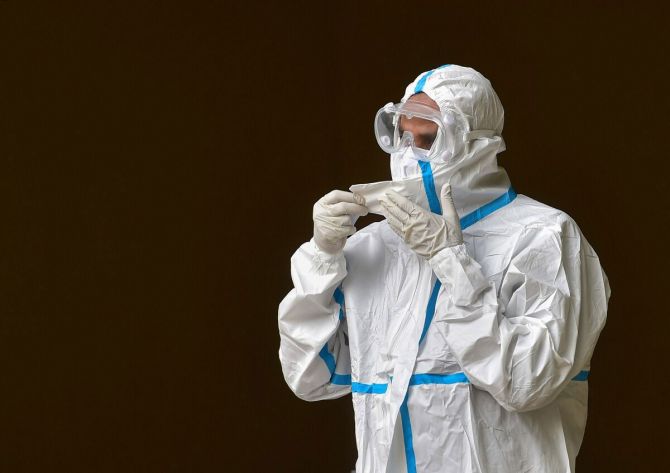 *IMAGE: The standard mandate is to not wear PPE for more than six hours. Photograph: PTI Photo

In a government-run hospital in Delhi, a critical care specialist emerges from the Covid intensive care unit after four hours of duty.

Safety protocols dictate that donning and doffing zones (where medics wear and remove their personal protective equipment, or PPE) must be separate to minimise infection spreading from used PPE.

In the hospital, however, there is just one area for both activities.

The exhausted doctor removes his PPE, strips naked, washes his own scrubs and hangs them to dry before they can be sterilised in the autoclave. *IMAGE: A doctor, is helped by a colleague to put on PPE before entering the ICU for COVID-19 patients at the Jawaharlal Nehru Medical College and Hospital in Bhagalpur, Bihar, July 26, 2020. Photograph: Danish Siddiqui/Reuters

About 1,000 km away in Bihar, another doctor works for eight hours wearing the same PPE kit.

While wearing the kit, he cannot go to the toilet or eat.

The standard mandate is to not wear PPE for more than six hours.

But at least he has safety gear; health activists observe that doctors in rural Bihar routinely work wearing little more protection than a mask.

As 2020 draws to a close, the question that few are asking is this: How long can the exhausted doctors in the frontlines continue the war against Covid without proper administrative backup?

Across the country, medics are feeling the strain.

With rising caseloads and consequently, longer exposure, doctors are finding themselves at higher risk of infection.

Yet, government hospitals, unlike their private counterparts, are not giving any extra recompense to doctors on the frontlines.

And many families of doctors who have lost their lives during the pandemic continue to go from pillar to post for compensation.

"Everyone wants that doctors should fight from the frontlines of the pandemic, but there's no reaction from the government when they fall ill or even die because of it," says Dr R V Asokan, honorary secretary general, Indian Medical Association. *IMAGE: A doctor speaks to a resident during a door-to-door verification of people to find out if they have developed any coronavirus symptoms in the Nizaumuddin area of New Delhi, April 8, 2020. Photograph: Adnan Abidi/Reuters

According to IMA records, to date, 2,730 doctors have been infected with Covid-19 and 674 have died.

"The case fatality rate, about 1.82 per cent in India, is 7-8 per cent for doctors in general and as high as 15-16 per cent for private practitioners who operate small clinics and often see patients in early stages of infection when they are most contagious," Dr Asokan says.

Yet, safety protocols across the country continue to be flouted.

In rural Uttar Pradesh, doctors participating in a National AIDS Day function on December 1 donned masks -- only for the photo shoot after the crowded function.

Dr Shakeel (he goes by his first name), Bihar convener of the public-health movement Jan Swasthya Abhiyan, reports that in the state only doctors dealing with confirmed Covid patients get to wear PPE.

"OPD doctors, who are more likely to come in contact with infectious patients before they test positive, make do with masks and gloves," he says.

The situation in Delhi is better, but marginally so.

"At the beginning of the pandemic, there was a lot of awareness about the quality of PPE," says Dr Harjit Bhatti, a doctor at the Manipal Hospital Delhi.

"Today, when doctors with drastically different body types wear the same size masks or PPE, no one bats an eyelid." 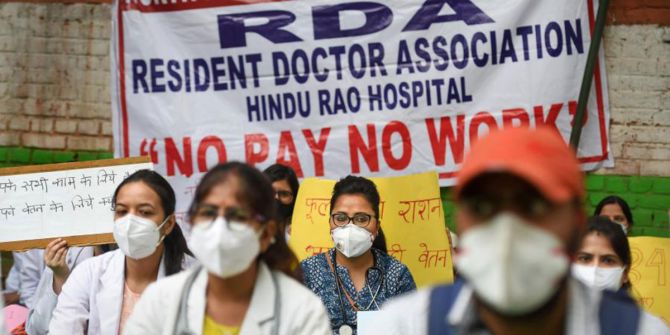 IMAGE: Resident doctors of the Hindu Rao Hospital in New Delhi during a protest at Jantar Mantar. Photograph: PTI/Photo

Other than in Kerala, few states have a confidential helpline that doctors in mental distress can access.

Unsurprisingly, some have been pushed off the edge.

In August, Nagendra S R, a doctor in Karnataka's Mysuru district, died by suicide after having worked without leave for three months away from his family.

An argument over increased testing targets with his superiors allegedly proved to be a tipping point.

"Other than their hospital's psychiatric facilities that they may unofficially access, doctors in Delhi at least have no psycho-social support."

Hindu Rao doctors have had to battle another critical issue: Non-payment of salaries.

In October, doctors at the hospital went on strike over the non-payment of three months of salary.

Eventually, they were paid their dues but say they have not received their salaries since then.

"Imagine how we felt when the media called us 'Corona Warriors'," says Dr Taara.

"We started a hashtag campaign on social media -- 'Unpaid Corona Warriors' -- to sensitise people about our plight."

Inevitable cracks are appearing within the doctors' ranks.

Across the country, resident doctors allege that senior doctors and consultants have left them to shoulder most of the burden of Covid treatment.

Indeed, as the IMA's statistics show, of the 2,730 doctors infected, 928 are residents compared to 383 house surgeons.

Other doctors criticise the mobilisation of Ayurvedic physicians during the pandemic.

"The fact is that other than critical care specialists, pulmonologists, gynaecologists and GPs (general practitioners), most other specialists are not involved in looking after Covid patients," says a resident doctor (name withheld on request).

"The government should ensure that their services are used before those of Ayush (Ayurveda, Yoga & Naturopathy, Unani, Siddha and Homoeopathy) doctors."

Meanwhile, there is confusion about whether practitioners of traditional medicine will be protected at par with allopathic doctors.

Consider the case of Thane-based Ayurvedic doctor Bhaskar Shrirang, who was reportedly asked by the municipal corporation to keep his clinic open during the pandemic.

He contracted Covid in June and died soon after.

His widow's application for insurance under the Pradhan Mantri Garib Kalyan package was rejected as his dispensary was not recognised as a Covid dispensary. *IMAGE: Aliza Ali, 12, shows a picture on her phone of her father Dr Javed Ali, a government doctor, who died due to coronavirus, September 23, 2020. Photograph: Danish Siddiqui/Reuters

In fact, a fraction of deceased Covid warriors' families have received the government's Rs 50 lakh compensation package announced at the beginning of the pandemic.

"The government backtracked later, saying only government doctors were eligible for it," says Dr Asokan, who has launched a strong appeal that doctors who have died during the pandemic should be treated at par with the martyrs of Indian armed forces.

IMA has also instituted a 'COVID Martyrs Fund' for which it is seeking donations from the public and institutions.

The apex body says that the lacunae exposed by the pandemic can be partially addressed by public health reforms, notably the creation of an All India Medical Service, which could ensure uniform medical practices across the country. 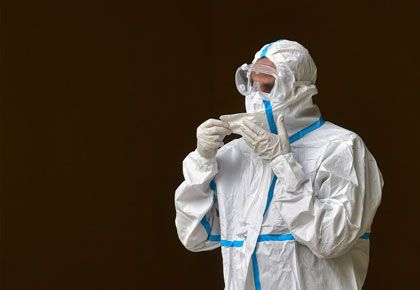