News
Business
Movies
Sports
Cricket
Get Ahead
Money Tips
Shopping
Sign in  |  Create a Rediffmail account
Rediff.com  » News » 'Dharmashastras are the most vocal defenders of caste'

'Hindus are proud of what the Dharmashastras symbolise, but they don't want to do any work to preserve it!,' Sanskrit scholar Donald Davis tells Kanika Dutta.
Illustration: Dominic Xavier/Rediff.com 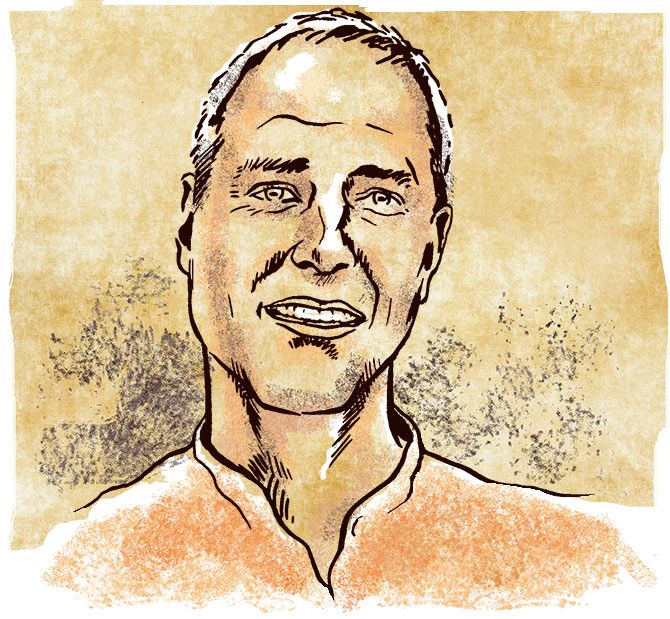 The 114-year-old Maidens Hotel has an engagingly eccentric ambiance about it, suggestive of The Best Exotic Marigold Hotel.

Overstuffed upholstery or the clutter of Raj memorabilia are not the only elements that reinforce this image.

A 12.30 pm table reservation for this lunch with Donald Davis, a noted Sanskrit scholar at the University of Texas, doesn't seem to have registered.

The doors to The Curzon Room are locked and unresponsive to my knocking.

An intercom call from the concierge finally opens sesame onto an ornate and slightly stuffy room.

It strikes me that Davis' choice -- dictated by proximity to his temporary place of work -- is appropriate.

The restaurant commemorates that most imperial of British viceroys, George Nathaniel Curzon, whom independent India can thank for preserving many of her monuments.

Davis, who has just authored The Dharma of Business, part of Penguin's Story of Indian Business Series, is a leading foreign scholar of the Dharmashastras.

This thought prompts me to ask whether, as Columbia's renowned Sanskrit scholar Sheldon Pollock frequently reminds us, the study of ancient Sanskrit and, indeed, classical Indian languages has waned in their country of origin.

The starter, a shared kebab platter, is served as Davis answers carefully, reflecting an unspoken understanding of the controversy around this issue in India's politicised academia.

"I can't particularly speak to Professor Pollock's wider claim but in my experience working with the Dharmashastra materials, the number of Indian scholars that I have met who are seriously working on the text is very few."

For the past several years, he adds, he has chaired the section related to law at the World Sanskrit Conference, part of whose mission is to draw scholars from different countries, especially from India.

"In spite of our best efforts we have found only a few scholars who have been working on the Dharmashastras and who have been able to come to conference to present."

He reckons that the imposition of colonial law diminished the immediate relevance of the Dharmashastras.

"Initially, the Brahmin pandits were attached to the courts as living resources for the judges, but in 1864 the maulvis and the pandits were dismissed."

In their place, the courts began to rely on the textual law that they had developed and precedents they had accumulated in 70-odd years of British rule.

This change dislocated the education structure -- the guru-shishya parampara -- through which Dharmashastra knowledge was disseminated.

"There were no more gurus taking chelas," he says, in contrast to the study of Sharia law.

"There you have the madrassa, not only in India, but also in Indonesia and the Middle East. One of the mandatory aspects in those places is fiqh or the study of the philosophy of Islamic law."

But why did the Orientialist tradition not revive interest in the subject?

"The British certainly spurred an interest in Sanskrit law in Europe and, later, America, but their interest was very narrow," he explains.

"They had a particular idea that Dharmashastra was a practically applied law of the land but as Indians began work within the new legal structure that the British forced upon them, they knew that that was the future so they didn't want to waste time learning about the Dharmashastras."

There was, however, a "great burst" of Indian scholarship between the 1870s and the 1940s from luminaries from traditional Pandit families, who were caretakers of the Dharmashastra tradition.

"And thank god for them, because those of us who work on the tradition today build on the works of P V Kane, Lakshman Shastri Joshi or Priya Nath Sen and others -- there's quite a long list."

Plus, in contemporary India, parental pressure has served to diminish the importance of humanities for students.

"There's a cultural perception of what's valuable now and that's going to be hard to break in the short term," he points out.

"So sure, Hindus are proud of what the Dharmashastras symbolise, but they don't want to do any work to preserve it!"

As we struggle to finish the generous helping of succulent kebabs, we discuss -- or rather Davis patiently explains -- the nuances of Dharmashastra as a philosophical tradition and his effort to distil it into a brief book for the Penguin series.

He makes the point that India wasn’t the commercial backwater the British made it out to be as part of their colonial project, a false stereotype that Marx famously endorsed.

"In fact, you can conclude from the complexity of the rules that they are discussing that India has quite a vibrant, complex economy," he says as the main course is served.

There are multiple interest rates for different types of transactions, for example, relationships of different kinds between partnerships, employers and employees and so on.

"It doesn't make sense that a dynamic tradition like this, which changes and develops over time, would have been created out of nothing."

Davis' Texan roots may have something in common with my Bengali ones or maybe the fact that he spent part of his three years in India in another non-vegetarian haven, Kerala, influences his choice of Lagan Ka Murgh, a Hyderabadi chicken curry, with steamed rice -- no vegetables, not even salad.

He is familiar enough with Indian food to comment on the methi overtones in the rich gravy.

We chat about the impact of Donald Trump and his anti-intellectualism ("scary") that brands everybody at university as "phony or Communist".

Some stream of consciousness prompts me to ask about encounters with Hindutva ideologues. They are fairly limited, he demurs, but adds, "Most of the time I encounter it through Indian students in the US whose knowledge of their traditions is inflected by BJP (Bharatiya Janata Party Web sites and so on."

He admits to getting more of these types of students than he expected and more than he did before.

"The popularity of the prime minister has made a big difference. Almost every Indian student that I know is a big supporter, mostly because few of them have little understanding of the inner workings of politics and what the options are -- and they don't live in India."

What issues do they raise?

"Well, they have a very narrow vocabulary."

He describes one encounter at an ecumenical association called the Hindu Students Association. "I had characterised Shankaracharya in a particular way and this guy wanted to talk about Shiva as a Vedic deity and said my characterisation of Hinduism as changing in a particular moment in time was incorrect because it had been the same from the Vedic period."

"So I asked, does the name Shiva occur in the Vedas? But Rudra is there, the student insisted. And I said, you are sure Rudra is Shiva, that it's exactly the same and has not changed at all?" He grins. "I usually deflect the heat from these questions by going back to the sources, and then most of them can't do the same."

The meat and rice are so filling that we skip dessert for coffee as I ask about the Dharmashastra view on caste.

He is on delicate ground here. "It is my opinion -- and I hope it is an informed one -- the Dharmashastras are the most vocal and staunch defenders of caste in the whole of Hindu literature."

"Boundaries are not only reality, but desirable. Many Hindus don't like to hear that, but we have to acknowledge at the same time that the Dharmashastras do not speak for all of Hinduism."

So no one has thrown eggs at him, as they did at Wendy Doniger, for suggesting this.

In any case, he acknowledges that as an American he is aware that it would presumptuous to come out guns blazing.

He chooses instead to focus "in a cheesy way" on "the beautiful things" in Dharmashastra before levelling any criticism.

Plus, he has the most practical coping mechanism of all: "I'm not living it day to day so I am not so polarised!" 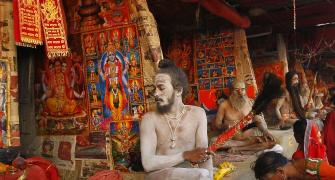 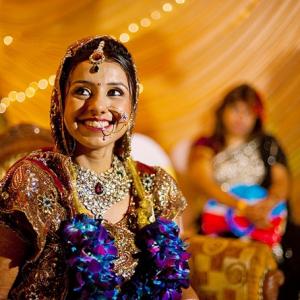 'Money is the new caste in India'