'Almost 70 per cent production time of a vaccine is dedicated to quality control, which is done through several hundred tests.'
Sohini Das reports. 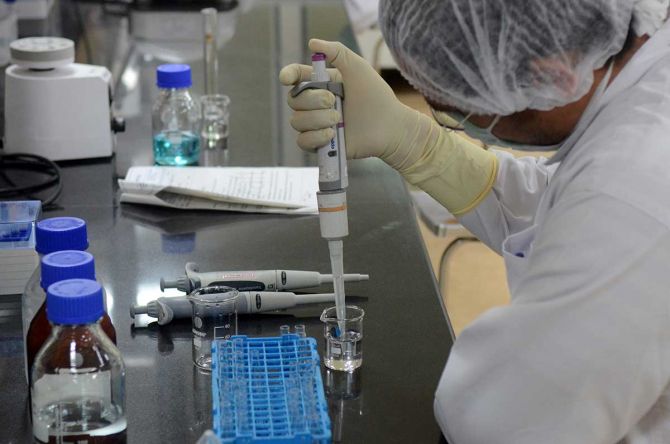 IMAGE: A research scientist at a Serum Institute of India laboratpry in Pune. Photograph: Euan Rocha/Reuters

Manufacturing COVID-19 vaccines takes between 40 days and 120 days, and thus from lab to jab, there's a lag of up to four months, according to industry insiders and experts.

It's at least 50 days from the day a batch production starts to the time it is available at a vaccination centre, even for those vaccines which take 30 days to manufacture, said experts.

This is because after the manufacturer releases doses from its plants following testing and inspection, these go to Central Drugs Laboratory (CDL), Kasauli, for inspection before their release into the market.

According to CDSCO (Central Drugs Standard Control Organisation) guidelines, all vaccines supplied in India are mandated by law to be submitted for testing and release to CDL.

Bharat Biotech said the timeline for manufacture, test, and release of a batch of Covaxin is approximately 120 days, depending on the technology framework and meeting regulatory guidelines.

'Thus, the Covaxin batches, the production of which was initiated during March this year, will be ready for supply only during June,' the company noted.

It further said that the production scale-up of vaccines is a step-by-step process, involving several regulatory SOPs of GMP (standard operating procedures of good manufacturing practices).

'There is a four-month lag for Covaxin to translate into actual vaccination,' Bharat Biotech said.

The Union health ministry, too, said: 'Vaccine being a biological product of medical importance takes time for harvesting and quality testing. This cannot be done overnight to ensure a safe product. Thus an increase in capacity of manufacturing, too, needs to be a guided process and an increase in gross production does not translate to immediate supply.' 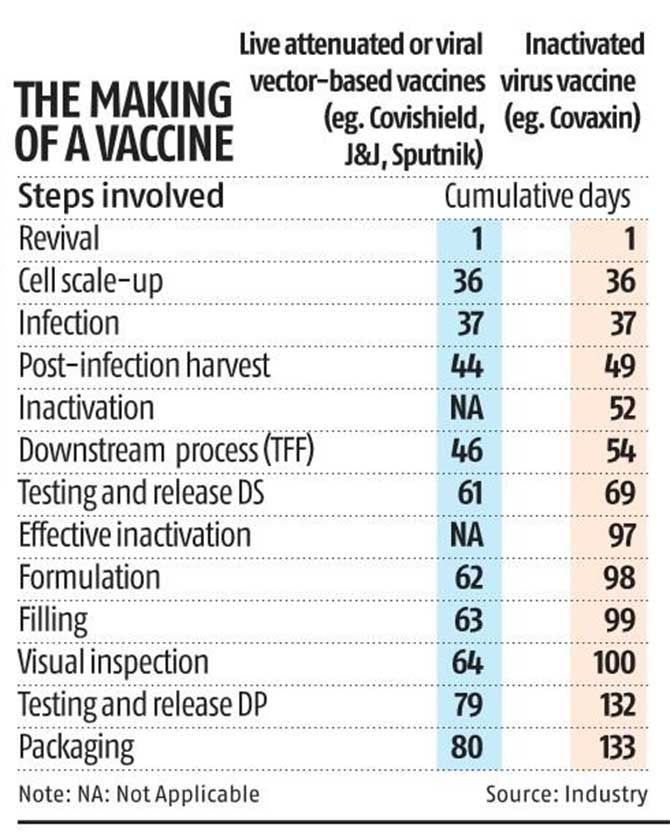 Industry experts point out that vaccines are complex biological products, made according to precise protocols and include multiple testing during the process of manufacturing.

"Usually, regular batches from start to packaging take from 40 to 120 days, depending on the vaccine type. Almost 70 per cent production time of a vaccine is dedicated to quality control, which is done through several hundred tests," said a senior executive of a vaccine manufacturing company.

DNA-based and mRNA based vaccines can be made relatively fast, he said.

"The usual timelines here are 30-40 days. But, for inactivated virus-based vaccines, the process is longer and takes usually over 120 days," the official said.

The data from industry shows that a batch of a viral vector-based vaccine (such as Covishield and Sputnik-V) takes around 80 days from start to packaging.

For a protein sub-unit or virus-like particle (VLP) technology-based vaccine (like Novavax Covid19 vaccine), it takes around 100 days or so to manufacture.

Dr T Jacob John, senior virologist and former head of the departments of clinical virology and microbiology at the Christian Medical College, Vellore, said to get more volumes, one has to add scale, or more batches.

"Large manufacturers have an advantage here; they can have large batch sizes and also have multiple batches ongoing," Dr John said.

"All vaccines are complex to make. For an inactivated virus vaccine, one has to grow the virus, ensure it is pure, inactivate it, then make sure it is inactivated, then add the adjuvant, again test for quality and safety and then give it to animal control or whatever is the quality control a company follows. That is how you have an identical vaccine as the previous batch. The maker also has to prove that the batches are identical," Dr John explained. 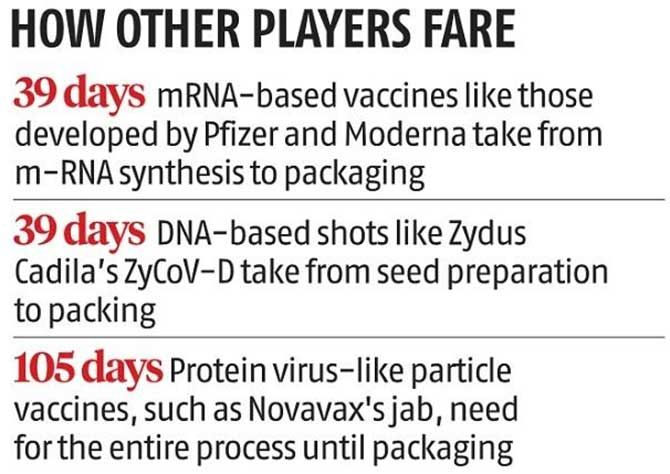 And after production comes logistics.

Bharat Biotech, for example, said the timeline for vaccine supplies to reach the depots of state and central governments from Bharat Biotech's facilities takes around two days.

'Vaccines received at these depots have to be further distributed by state governments to various districts within their respective states. This requires additional days,' Bharat Biotech said, explaining why it takes time for a vaccine to the last mile.

'Pandemic vaccines are distributed by respective governments equitably across all sections of the population. Vaccines once available at vaccination centres are then administered to recipients over a period, based on demand,' Bharat Biotech added.

Refuting media reports on 'missing doses' of Covaxin, the health ministry said Bharat Biotech has, so far, supplied 27.6 million doses to the central government, of which 22 million doses have been consumed (as on May 28), including wastage.

The balance doses with states thus is 5.5 million; private hospitals have also received 1.3 million doses of Covaxin, so far.

In May, an additional 2.1 million doses of Covaxin were to be supplied, taking total vaccine supplied to date to 31.1 million.

Almost 9 million doses of Covaxin are committed by the manufacturer in June.