Covid-19 leads to India's only quinine factory being revived

Perched in the hills of Darjeeling, the factory was set up in 1874, but has remained shut since 2001.
Efforts to reopen the colonial era establishment are now on a war footing, reports Namrata Acharya. 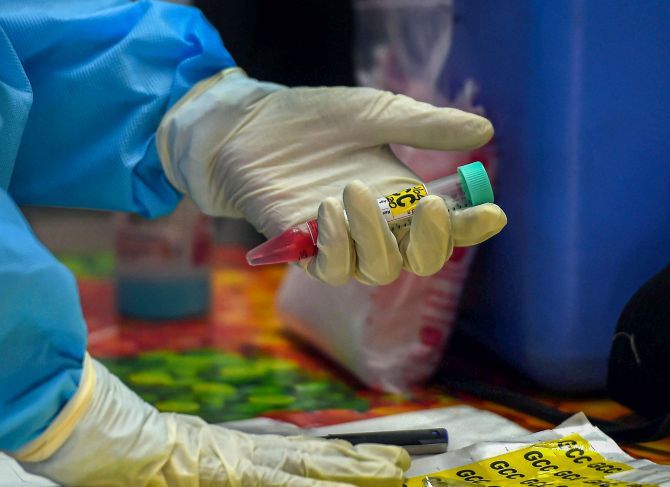 IMAGE: Health workers take the sample of a suspected COVID-19 patient at a hospital in Chennai. Photograph: PTI Photo

Udena Amgmu Yonzome holds one of the rarest jobs in the country. She is the only official quinologist, or expert in the age old anti-malarial medicine quinine, derived from the bark of a plant called cinchona, in India.

In February, Yonzome joined as assistant quinologist at the country's only exclusive quinine processing factory, situated at Mungpoo (Darjeeling).

Perched in the hills of Darjeeling, the factory was set up in 1874, but has remained shut since 2001 as it failed to secure the Good Manufacturing Practices (GMP) tag, required for producing pharmaceutical products in India. The last quinologist retired in 2012.

Covid-19 has triggered urgency in reviving this sick unit from the colonial era, as Hydroxychloroquine (HCQ), an anti-malarial drug similar to chloroquine (a synthetic form of quinine), quinine, has surfaced as a potential medicine to alleviate symptoms of the disease.

HCQ is less toxic and an improved version of chloroquine.

However, much before the pandemic swept the globe, the West Bengal government had already begun reviving the quinine factory, even though there were doubts over its large-scale viability in the face of HCQ's proven efficacy to treat malaria with minimal side effects.

In fact, when the state government sought applications for the appointment of auinilogist and assistant quinologist in 2018 for the quinine factory at Mungpoo, the numbers of applicants were so few that the entrance exam had to be scrapped and recruitment took place through direct interviews.

However, the scenario has changed since last month.

Efforts to reopen the colonial era establishment are on a war footing, with the state government working hard, says Samuel Rai, director of cinchona and other medicinal plants, West Bengal.

In fact, Mungpoo is the only major cinchona plantation site in India, apart from a small-scale production in the Nilgiri hills.

Every year, Mungpoo produces 200,000 kg of cinchona barks, bought by pharmaceutical companies in Gujarat and Maharashtra.

"Before Covid-19, demand for quinine was low. Now, we are getting some queries from Madhya Pradesh and Uttar Pradesh. Thousands of labourers will benefit if demand rises," says Rai.

Cinchona plantations in Darjeeling are spread over 3,400 acres, with about 100 acres added every year.

Close to 5,000 plantation workers and 400 support staff members are directly associated with the plantations. The plantations have an illustrious history, too.

Cinchona plants originally belonged to South America, brought to India by the British and into present-day Indonesia by the Dutch.

However, the decline of Indian quinine started in the early twentieth century, as the Indonesian variety was superior, says Rohan Deb Roy, lecturer (South Asian History), University of Reading, who has specialised in the field of colonial medicine.

German scientists discovered a synthetic alternative to quinine, chloroquine, in the 1930s.

Later its improved version HCQ was discovered as an anti-malarial drug that made the botanical raw material of cinchona redundant.

However, for long, quinine remained a popular drug as it was seen as a colonial solution to malaria, a disease prevalent in developing world.

"In the nineteenth and early twentieth centuries, malaria was predominantly associated with tropical colonies ruled by the European powers. In imperial propaganda, quinine was highlighted as an example of how colonial rule benefited the colonised.

"Even after the end of colonial rule, malaria is seen to be feature of the so-called 'developing' and 'underdeveloped' world.

"In contrast, the Covid-19 pandemic has affected the whole world. The pandemic has exposed the fragility of the 'austere' public health systems of the United States, the United Kingdom and European countries," says Roy.

While the prospects of reviving the quinine factory look exciting, doctors are yet to give their verdict on whether quinine can be a substitute for HCQ, which itself is in an experimental stage in the treatment of Covid-19.

"Quinine was once a very effective medicine, especially for the treatment of obstinate forms of malaria. However, quinine was found to have many side effects.

"After better alternatives were found, it was no longer used. For Covid-19, there is no evidence that quinine will be useful," says Arindam Biswas, consultant, department of general medicine, in a private hospital.

Even though there are question marks on the place of quinine in modern pharmaceutical industry, Yanzome and Rai are betting on its high potent for revival.