'Every morning, when I had to step out, my wife would cry.'
'I would tell her that if I don't do it, many people will suffer; many people would die.' 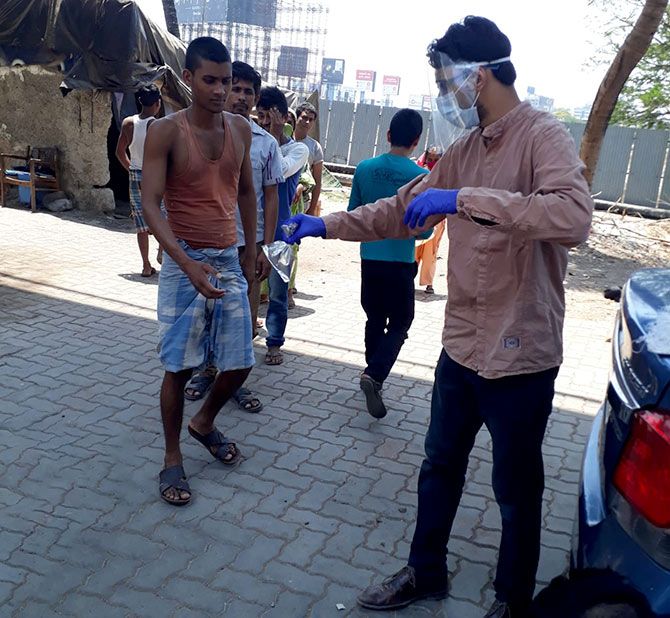 The biggest of which is hunger.

Soon after the lockdown was announced, he began stepping out in the evenings, providing food to a few impoverished families.

"It has always been difficult for me to see people hungry, people starving," he tells Savera R Someshwar/Rediff.com. "I stay in Bandra (north west Mumbai) and I knew that, after the lockdown, many people would be struggling to feed themselves and their families."

"So, every evening, I would take cooked food and dry snacks that I could source from the local baniya (shopkeeper) and give it to any labourer or poor person I saw," Sofyan adds.

When his neighbours heard about what he was doing, some of them pitched in with meals.

"I was managing to help five to 10 people every day."

Sofyan, who is 29, is part of the brand acquisition team at an e-retail company, Primarc Pecan Retail Private Limited. He dipped into his savings and his family helped; in a few days, they spent about "Rs 10,000" feeding people.

As a salaried employee, he worried that his resources were inadequate to battle the hunger he was witnessing.

"That's when I came across Ruben Mascarenhas's post on Facebook (Mascarenhas is one of the founders of Khaana Chahiye, a volunteer-based service which has been driving around Mumbai, providing food to the hungry)," says Sofyan.

"Ruben is someone I know because I have always been interested in social work. And I have been helping whenever and wherever I can," he adds.

"I met Ruben for the first time eight years ago when they were running a campaign against unnecessary and illegal posters put up by politicians in Mumbai."

"When I read they were planning to feed hungry people, I got in touch with him again."

On the first day, he helped Ruben and Pathik Muni (one of Khaana Chahiye's core team members) distribute food from Bandra to Dahisar, north west suburbs on the Western Express highway.

It was a decision that upset his pregnant wife. Earlier too, she had not been in favour of Sofyan stepping out in the evening with food parcels.

"We have been married for one-and-a-half years. We are expecting our baby in June," he shares.

Terrified by the highly infectious nature of COVID-19, Sofyan's wife did not want him to go.

But that first trip had opened Sofyan's eyes to the desperation and the hunger caused by the lockdown.

He decided he wanted to help as much as he could.

"But I did not think I would become so involved," he says.

The initial few days, during which the distribution process was being set up, was tough.

He would leave at noon and only return by 5-6 pm.

"After that, we started getting volunteers and my work reduced. Now, I only go for three to four hours. By God's grace, Khaana Chahiye now has a lot of volunteers. Honestly, we didn't think we will get so much support and so many people will come to help us." 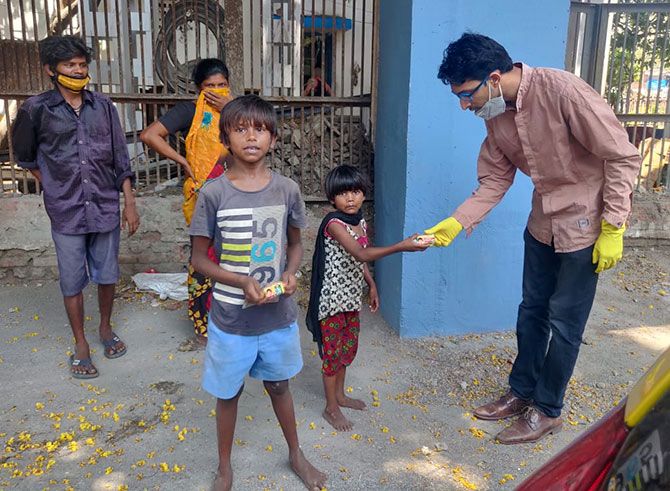 At the same time, says Sofyan, it was difficult for him to see his wife so unhappy.

"Every morning, when I had to step out, she would cry. I used to spend 10, 15 minutes convincing her that this something we need to do," Sofyan says.

"I would tell her that if I don't do it or if everyone would only think about their immediate family, many people will suffer; many people would die. So we should not think just about ourselves."

Sofyan explained to his wife about the precautions he was taking. "I told her I take the necessary precautions. I wear a mask; I wear gloves; I use a sanitiser."

"I understand her fear, but what I am doing is important. In today's times, if we just think about ourselves, it is a terribly selfish act. We need to think about other human beings as well."

"People are hungry. They are desperate for food which is such a basic human need."

"And when you know that is happening, how can you ignore that and sit at home and enjoy a meal?"

Sofyan's wife is now at her mother's home for the last few weeks of her pregnancy.

The Khaana Chahiye team has asked him to take a break since he will soon be a father.

"One my colleagues there, Mazhar, explained that my newborn child will have zero immunity. He said that if I want to go near my child I should stop going out."

But Sofyan does not want to "back out thinking of my own personal needs."

Instead, he is being even more careful with the precautions he is taking.

And he has made a vow to himself. "I've promised myself that I will not touch my child for a few days. Before I touch my wife and child, I will get myself tested for COVID-19 so that I know I am not posing any kind of risk to them."

He knows he is in danger of contracting the virus every time he steps out of the house.

"You can see the desperation in people when we go do distribute food," he says. "Sometimes, they forget about social distancing and swarm the car, but we ensure they maintain distance before we distribute the food."

"I told my wife you should see the condition they live in. I explained to her that when you give food to a starving person, the happiness you see on their face is not something I'd see on her face if I was able to gift her a car."

"That level of happiness, when they get food, is something else altogether."

"People like us should be very thankful to God that we don't have to face such desperation."

"My father says when death has to come, it will come. We don't need to worry."

"In these times, though, we need to take proper precautions."

And as Sofyan steps out for his next run as a food ninja, that's exactly what he is doing.