'I don't think I can go back home before the lockdown is lifted because Nitishji has said he will not allow students from Kota to return.' As one-state-after-another brings its students back from Kota in Rajasthan, where they are studying for competitive entrance exams, Bihar has refused entry to its children.

There are around 12,000 Bihari students stranded in Kota, the coaching hub for IIT and medical entrance exams. The students have appealed to Chief Minister Nitish Kumar to bring them home, but have had no luck so far.

There was a furor recently when a Bharatiya Janata Party MLA was issued a special vehicle pass to bring his daughter back to Nawada in Bihar. A sub divisional magistrate in Bihar was suspended for negligence.

A few days ago, Bihari students stuck in different hostels and paying guest accommodation protested on their respective terraces over the state government's decision. Some went on a hunger strike. A protest campaign on Twitter drew enormous support.

After a petition was filed in the Patna high court, the state government informed the court that allowing entry to the students would violate lockdown guidelines.

Rediff.com's Archana Masih spoke to Bihari students in Kota who are desperate to go home. There were 20 students living in a three-storied paying guest accommodation, but now I am the only one left.

The students from other states who were living here have all returned home after their chief ministers arranged their return home.

I don't think I can go back home before the lockdown is lifted because Nitishji has said he will not allow students from Kota to return. He has said an outright no.

The coaching institute where I am enrolled had asked us 10 days ago to send our details so that permission for a pass could be submitted to the RTO, but Nitishji banned entry into the state.

The mess from where I used to order a tiffin from is closed since most students have left. I bought utensils and other essentials so that I can cook for myself.

There are a few messes that are open, but it is not safe to eat from there with the increasing number of cases in Kota.

The owner of the PG has said I can pay the rent later. I have been eating khichdi every day. I don't know how to make rotis.

I go out once in 2, 3 days to buy vegetables and milk. I have some money and have been doing online transactions or using PayTM.

The study schedule is also badly disrupted. There are online classes for a few hours every day, but I am unable to concentrate because I am so tense about the situation.

My mind is at unrest. I don't know whether to laugh or cry, the situation is such.

My family members are more troubled than me. My mummy didn't eat for two days when she came to know that I would not be able to come home. My father works in the Gulf and he is also stuck there, so my family is worried for both of us.

Some Bihari students went on a hunger strike on the terraces of their PG accommodation. #Nitishhelpkota was trending on Twitter with 2.5 lakh retweets, but it has had no effect on the state government.

Going by what the Bihar government has told the Patna high court that it will not violate the lockdown and allow its students to return, I don't expect Nitish Kumar will relent.

But if he allows travel passes then students can at least make their own arrangements.

I just want to go home. 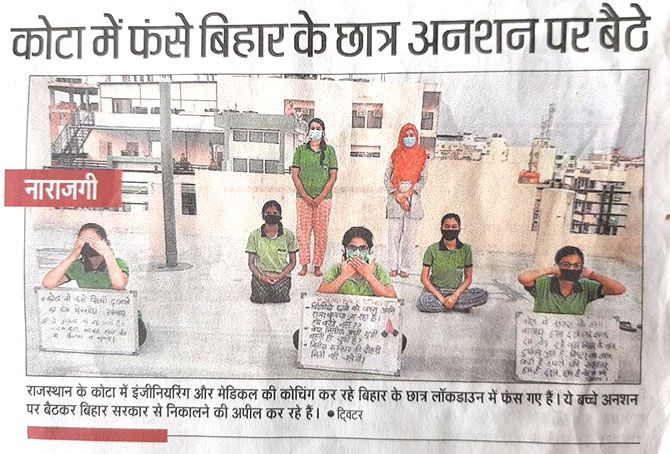 People nearby have also started asking when will we go home. Only Bihari students have been left behind in Kota.

Most of the PGs have been vacated, the three of us from Bihar sharing a PG accommodation are stuck and can't go home.

Bihar has started a helpline number for students stranded outside the state. I tried that number 6-7 times, but it didn't go through even once.

Things were better when students from other states were here, but as one state after another brought them back, there are hardly any students left.

Food is a problem. I have to go to the mess to eat and I always think what if mess staff has been exposed to COVID-19.

I feel mentally disturbed and can't concentrate on my studies.

The shops are also open for only a few hours every day. I had to wait for 2, 3 days for the hand sanitiser stock in the medical shop.

I am making do with the money I have, there are 2, 3 ATMs around, but only one is working. I take a sanitiser and wipe the buttons when have to withdraw money.

The coaching institute has given a helpline number to call if we don't get food.

Regular classes stopped at the institute in February as the syllabus was complete.

Revision tests used to happen every 3 days for the NEET exam. Then the tests were cancelled.

I thought I would go home on March 23-24, but the lockdown happened and we are stuck.

I had gone to the coaching institute to find out if I could get a pass to go to Jharkhand where my nani (maternal grandmother) lives, but found out that students could only return to their respective states of domicile.

I could not go because Bihar has barred entry.

A BJP politician was given a pass to bring his child home. He got a pass to travel, but ours was declined. Is this fair?

Some students at the institute were saying they would go on a hunger strike and the teachers were explaining that they would get sick otherwise.

The institute has given us numbers of teachers whom we can contact if there is any problem in studies. If we have any food problem, we can call them and food will be sent to us.

I have spoken twice to my mentor. He has said if the Bihar government gives permission, then the institute will make arrangements to transport us home. 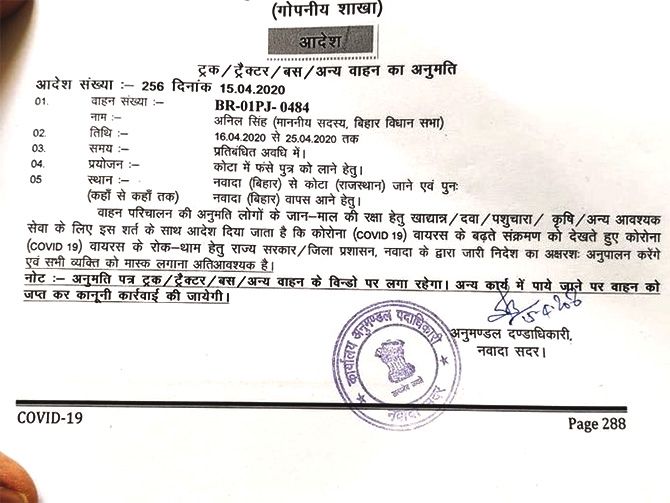 IMAGE: A screen capture from an online protest on Twitter showing a Bihar government pass granted to a Bharatiya Janata Party MLA to bring his daughter home from Kota.

I was to give the IIT entrance exam in April, but don't know when it will happen now. I may change the exam centre to Darbhanga, at least I will be safe there and in my home.

But I don't know when I will be able to reach my home.

Seeing that children from other states have been brought back by their states makes us feel worse.

When the trains stopped, we thought we would be able to return on April 14-15 after the lockdown ends. UP, Haryana took action and brought their children home, other states followed, but only we Biharis are left.

There were 12 students in my PG, only two of us remain, the rest from UP and Haryana have all gone.

Food and mental depression are my biggest problems. Kota has more COVID-19 cases than all of Bihar. If Bihar gives us permission to return, the institute will arrange for us to go home.

The quality of the food in the mess where I get meals from has also deteriorated.

We get lunch and dinner in the mess which is around 200 metres away. In the morning I eat bread.

Roti, dal, subzi is served for both meals and the quality and quantity has both deteriorated. The word is that the mess might also shut down.

I go to the mess where other students also come to eat. There is no certainty whether the mess staff is cooking hygienically or sanitising adequately.

I try my best to maintain social distancing, but it depends on others too, isn't it?

Looking at Nitish Kumar's stance, I don't think he will call us back.

The state government has told the high court it is not possible. Whatever hopes we had were dashed a few days ago. Maybe the Opposition will put pressure.

I don't want to make my family more tense so I keep telling them that I am ok.

It is a 35-hour train journey from Kota to Patna and then a 3 hour journey by road to Darbhanga.

Home is far, I last went during Diwali. I just want to go back. 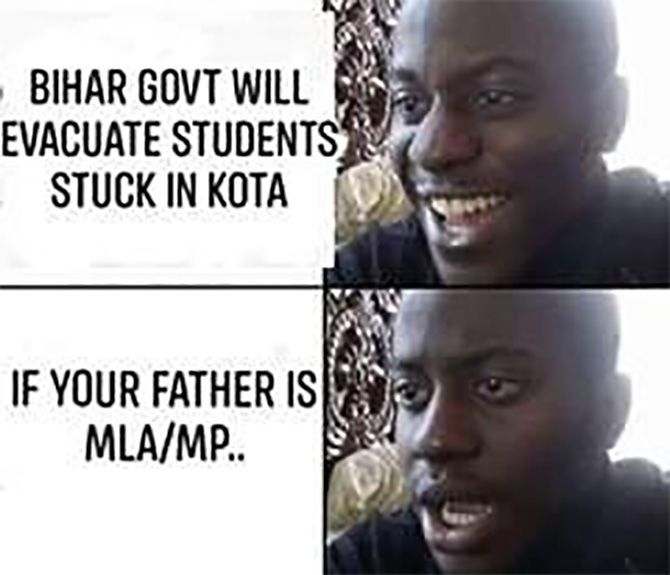 I live in a hostel which has a mess on campus. Half the students have left for home.

We are not allowed to go out and if we order any snacks or fruit from outside, it is delivered at the gate. The hostel manager arranges for it to be delivered to us inside.

Our syllabus was over by Diwali. These days we are having online classes for a few hours. It is easier for us in the hostel than those who are living in PGs. The hostel staff is there to look after us.

Bihar students are desperate to go home and our loved ones keep calling us from home.