No signs of Covid curve flattening, cases to peak in Jul-Aug

'We don't know how complicated things will get with the onset of the monsoon.'
Ruchika Chitravanshi reports. 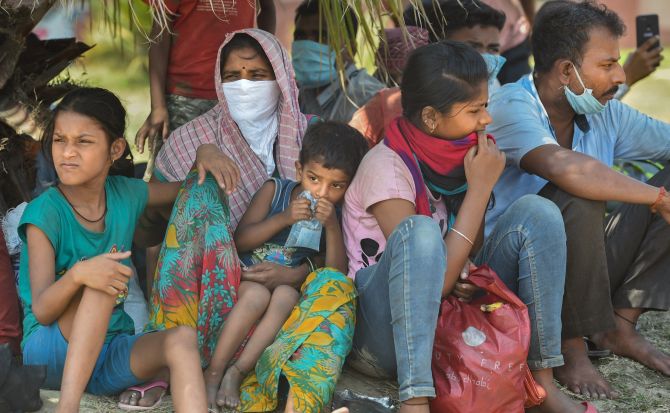 IMAGE: Migrant workers and their families await screening in Lucknow before being permitted to leave for their villages in Uttar Pradesh. Photograph: Nand Kumar/PTI Photo

While the doubling rate of COVID-19 cases has improved to 13 days in the country, the curve does not show any sign of flattening as epidemiologists expect a steeper rise in the number of cases in coming days.

The daily count of COVID-19 cases has risen sharply in May as compared to April, taking India's tally past China to over 90,000 cases, with 2,872 deaths.

The country recorded the highest single-day spike in COVID-19 infections on Sunday with 4,987 cases.

Experts attribute the increase to the easing of the lockdown, movement of migrant workers, higher testing and better reporting of cases.

"The epidemic is growing beyond what we have ever seen in the past. The number of cases would not increase in an additional manner but double every few days... Every expert knew this," says Dr Jacob John, virologist and former chairman of the Indian Council of Medical Research.

"As long as there are people, the virus will find them," Dr John adds.

The doubling rate in India currently stands at nearly 13 days.

In order to flatten the curve this rate should be around two weeks, say experts.

While many feel that at current levels, India may have somewhat flattened the curve, some have raised concerns about the rising numbers.

Doubling rate calculation, according to experts, assumes that the growth rate is constant. It measures relative change than the absolute scale of the pandemic.

"India's data is beating my intuition... Over April, the growth rate was slowing down, the curve did not flatten, but the rate was slower. From the beginning of May, it has been accelerating slightly faster," says Dr Bhramar Mukherjee, professor of epidemiology, University of Michigan.

Dr Mukherjee says an increase in the doubling time indicates a slowdown in transmission if the underlying reporting rate remains unchanged.

"This last phrase is the key here. I think this is completely violated for India, the reporting rate across time intervals is not the same at all, due to changes in testing and reporting practices," she adds.

For instance, on May 5 when 3,597 new cases and 194 deaths were added in a single day -- highest at that time, the spike was attributed to incorrect reporting in some states, such as West Bengal.

The overall spread of COVID-19 is not similar across the country, with some states showing a particularly grim picture.

While Maharashtra is leading the tally with more than 30,000 cases, Tamil Nadu has been witnessing a sharp increase over the past few days, with a doubling rate of less than a week, way faster than the national average.

The increase could also be attributed to more testing.

Over 2.2 million tests have been conducted till May 17, and the government has built the capacity to increase the testing to 100,000 tests per day.

"It is not an unexpected increase... There is a lot of variation among states, but ultimately in those states (where there are fewer cases) also it will happen, but will be delayed... This lockdown was to buy time to prepare for the inevitable," says Dr E Sreekumar, chief scientific officer, Rajiv Gandhi Centre for Biotechnology.

The saving grace, however, according to experts, is that the spread in such states is not likely to be in the form of an explosive outbreak, but smaller clusters in different parts of the country.

Nonetheless, the numbers are likely to increase further in the coming days, with most expecting the cases to peak in July-August.

"The immediate result of the lockdown is a successful drop in cases... Its delayed benefit is flattening of the curve. Without getting the first result, you cannot export the second," says Dr John.

The growth of the epidemic is proportional to the number of people available for it, Dr John points out.

"Whatever you do -- drastic or non drastic -- it will not shift the peak very much except by a week or so," he adds.

What can be done to contain this?

"We have to be more result oriented than process oriented... We had a leaky lockdown and did not make wearing masks compulsory early on," Dr John says.

Epidemiologists are also concerned about the monsoon.

If high temperatures were expected to bring down the rate of the disease spread, the reverse should happen in the monsoon when the humidity will rise, and the infectious droplets would linger much longer on surfaces.

"We don't know how complicated things will get with the onset of the monsoon," says Dr Sreekumar. "Hospitals see large numbers of admissions during the monsoon, and clinicians will struggle to distinguish COVID-19 patients."