China's dams on Brahmaputra can be dangerous business

India should take up the issue of China building three dams on the Brahmaputra river in the strongest way with Beijing. But the solution is definitively not building more dams in Arunachal Pradesh, cautions Claude Arpi.

It is amazing that the Indian government is 'surprised' by China's announcement that its plan to build dams on the Yarlung Tsangpo/Brahmaputra river is still on track.

Former foreign minister S M Krishna had told Parliament in November 2011 that the then Chinese premier Wen Jiabao, during his visit to India in December 2010, had told him, 'China's development of upstream areas will never harm downstream interests. The government has ascertained that the dam at Zangmu in the Tibet Autonomous Region is a run-of-the-river hydro-electric project, which does not store water and which will not adversely impact the downstream areas in India.'

The Indian government did not read between the lines; China never said that it would not construct other dams.

A few days ago, China announced that it had decided to go for a massive controversial programme to dam the Salween (or Nu) river in Yunnan province (which then flows to Myanmar and Thailand).

Eight years ago, Premier Wen Jiabao, a geologist by training, had suspended the programme due to environmental concerns.

China's State Council has now posted a blueprint for its energy sector in 2011-2015 on its Web site, making it clear that the 2004 ban had been lifted.

'Hydropower bases on the Nu River and the upper reaches of the Jinsha (Yangtze) and Lancang (Mekong) will be kicked off in an orderly manner,' it said.

It is difficult to say why this decision has been taken before the change of leadership in Beijing is completed in March and a new team takes over.

According to The South China Morning Post: 'Some environmentalists were stunned by the plan's revival, which is part of an effort by the government to promote hydroelectricity as a cleaner alternative to coal. Opponents said the decision marks a long-awaited victory for the country's mighty state-owned power companies and local governments that have been lobbying top leaders to promote the building of mega dams, regardless of the potential safety risks and social consequences.'

The lifting of the ban means that with the construction of 54 hydropower plants -- termed as key construction projects -- an extra capacity of 120 gigawatts will be added to the grid.

The controversial Xiaonanhai dam on the Yangtze River -- a pet project of Bo Xilai, Chongqing's sacked party chief -- is among the 54 key plants to be soon constructed.

Wang Yongchen, who works for Green Earth Volunteers, an environmental NGO based in Beijing, told the The South China Morning Post, 'Wen (Jiabao) was able to put those projects on hold for eight years, but with his tenure coming to an end, the pro-hydro interest groups are getting an upper hand again.'

However, it is surprising that Beijing did not wait for the newly-appointed administration to take over before deciding on such a controversial issue.

Did the dam lobby manage to use the interregnum to push the files?

It is absolutely possible.

The dams of the Yarlung Tsangpo should be seen in this perspective.

In fact, despite the government of India's 'surprise', the project has never really been shelved, though the larger issue of diverting the river has apparently not reached a consensus.

In November 2011, an International Conference on River Waters Perspectives and Challenges for India was organised by the Foundation of Non-Violent Alternatives in New Delhi. Many Indian and foreign scholars participated, including a few Chinese experts.

Professor Shaofeng Jia, a distinguished scientist from the Centre for Water Resources Research, Chinese Academy of Sciences, dismissed the issue of diversion of the Yarlung Tsangpo/Brahamaputra.

Professor Shaofeng said the Great West Route Diversion Project, as the diversion is known, was, 'Too far, it is 2,000 km away from Nanjing; too high: the lifting of water more 1000 m; too difficult: high elevation, new technical movement; too complex: geological condition; too dangerous with frequent geological disasters, such as landslides, earthquakes and too expensive!'

'The Chinese government had never planned it or supported it,' he added.

Professor Shaofeng also stated that there would be 'no mega dam', such as the 38,000 MW ones often mentioned in the Indian media. But he added, 'Hydropower stations will happen.'

The Zangmu project, under construction since 2012, is considered as a relatively small dam (540 MW) and as one that will 'not disturb the environment much'.

'There will be some disturbances to the ecosystem, but hydropower is greener compared to coal as a source of energy and sustainable. The key point is to look for the balance point between hydro-energy development and ecological protection,' the professor added.

A map of the area, already available on the Internet a few years ago, shows the six proposed dams, including the Zangmu project now under construction. They form what China calls a 'cascade'.

So why be 'surprised' now?

It is probably true that the Chinese authorities managed to pacify their Indian colleagues by saying that these were small dams (which is true by Chinese standards) and New Delhi need not worry.

They must have added that the projects are 'run-of-the-river' ones and therefore there is no danger to India as the reservoir will be very small and India will not encounter any radical change in the flow of the mighty river.

The security threat posed by such dams have been in the limelight after the collapse of the Malpasset dam in France on December 2, 1959.

Shortly after 9 pm, the entire dam wall broke open, with only a few blocks remaining on the right bank. The breach created a massive wave -- 40 metres high -- which moved at a speed of 70 km per hour. It destroyed two small villages, Malpasset and Bozon, the highway construction site nearby and 20 minutes later reached the town of Frjus. The wave was still three metres high. Various small roads and railroad tracks were destroyed on the way and the western half of Frjus town was flooded.

The tragedy claimed the lives of 423 people.

According to a French television documentary, the collapse of the Malpasset dam could have been an act of terrorism by Algeria's National Liberation Front.

Can you imagine what would happen in the Himalayan region -- with its myriad network of dams -- in case of a conflict between India and China?

It is an issue that India's security czars (I don't know how many of them are officiating in Delhi) should consider seriously.

The seismology of the area should also be considered.

Recently, a study by the Nanyang Technological University in Singapore revealed for the first time that in 1255 and 1934, two great earthquakes ruptured the surface of the earth in the Himalayas.

Professor Paul Tapponnier of the French Academy of Sciences, thanks to new high-resolution imagery and state-of-the-art dating techniques, discovered that the 1934 earthquake did rupture the surface of the earth, damaging the ground across an area of more than 150 km, in the Himalayas.

Building dams in these areas is a dangerous business.

Delhi should, in any case, take up the issue in the strongest way with Beijing.

But the solution is definitively not building more dams in Arunachal Pradesh, as some have proposed.

The argument that China can be contained by doing worse -- build larger hydropower plants on India's side of the border -- is childish, to put it mildly, though in the process the pockets of the local politicians will fill up faster than the reservoirs.

Till now, China has refused to collaborate with downstream states.

In May 1997, when the United Nations General Assembly adopted a Convention on the Law of the Non-Navigational Uses of International Watercourses, China was one of three countries that voted against it, with Turkey and Burundi. India abstained from the vote.

The rather mild Convention 'aimed at guiding States in negotiating agreements on specific watercourses.'

In the long run, whether by adopting such a convention or by signing a bilateral treaty along the lines of the Indus Water Treaty between India and Pakistan, Beijing has no choice but to collaborate with its downstream neighbours on a crucial issue like water, on which the future of Asia depends.

China's current attitude does not tally with the status of a 'responsible power' that the Communist nation is striving for. 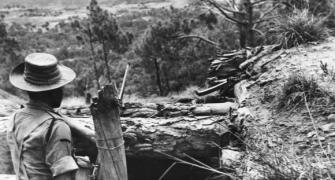