Can such people be doctors you would trust? 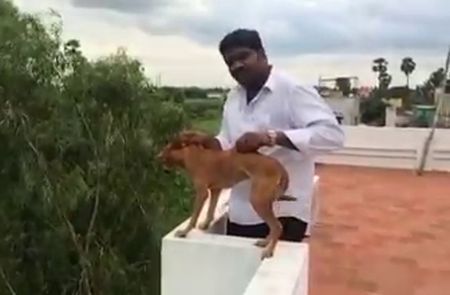 Two medical students, who hurled a dog from a terrace, and filmed the incident, were on Wednesday arrested after the shocking video went viral drawing outrage. But they got bail in less than five minutes because the law lacks bite, says T S Sudhir

Some time around 12 noon on Wednesday, two would-be doctors, Gautam Sudarshan and Ashish Pal walked into the Kundrathur police station in Chennai. The two knew that Rs 50 would be the maximum fine that would be imposed on them under the Prevention of Cruelty to Animals Act of 1960.

The two are accused of having flung a dog from atop their building some two weeks ago. The cruelty committed by Gautam was captured on camera by Ashish. Their idea of a joke went horribly wrong after the video was leaked on Monday evening and by Tuesday morning, the two were identified and the riot act was read out to them by the police and the medical college chairman.

What followed at the Sriperumbudur court where the two were taken to showed that the law concerning animal rights lacks teeth. The judge sent them to judicial custody until July 20, at which point their lawyers moved the bail petition.

Bail was granted with a surety of Rs 10,000. Within five minutes, the two medicos walked out free.

At the same time as her two perpetrators were walking out free, Bhadra, as the dog has now been named, was undergoing treatment at the Vepery Vet hospital in Chennai. The name Bhadra is most appropriate as it means blessed or fortunate.

She has suffered two fractures, in her right hind leg and spine, walks with a limp now, and will take about six weeks to recover. She is actually very young -- just five months old.

“What was almost touching was how despite having been subjected to such cruelty by a human being, her faith in humanity still is intact. She came to me, wagging her tail when I found her on Tuesday evening,'' said Shravan Krishnan, an animal rights activist who has tracked this entire case.

Activists do not want to give up just because the law lacks bite. They plan to move the Chennai high court on Monday after the Eid break, seeking cancellation of the bail. Some eminent Chennai lawyers have offered to argue the case pro bono. 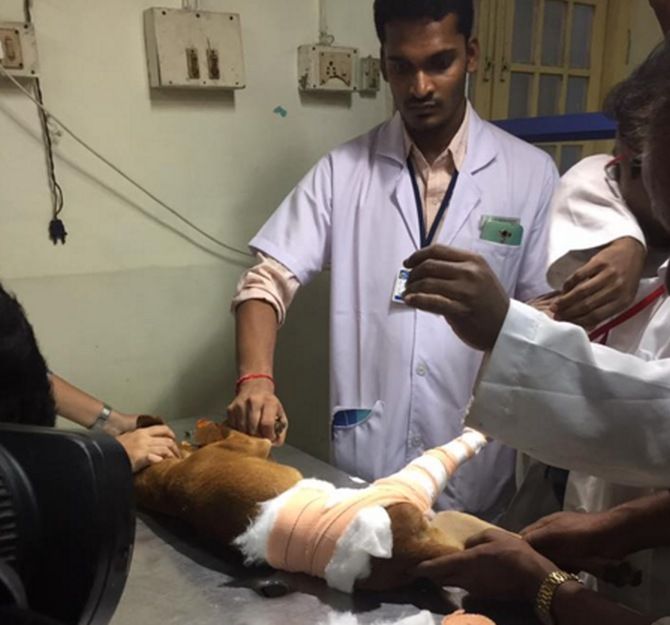 IMAGE: Bhadra during her treatment at the Vepery Vet Hospital in Chennai. Photograph: Shravan Krishnan/Facebook

“We plan to argue that the case be seen from a child abuse point of view. Research worldwide has shown that people who indulge in animal abuse graduate to abusing children and then other forms of crime. We want to request the court to look at the case in a different perspective,'' says Antony Rubin, animal rights activist who filed the first information report in this case.

Under section 439 (2) of the Indian Penal Code, A high court or court of sessions may direct that any person who has been released on bail be arrested and commit him to custody.

It is this section of the IPC that the activists are pinning their hopes on. The Humane Society International also plans to collect 1 lakh signatures over the next three days to put pressure on the government to alter laws relating to animal safety.

Meanwhile, MadhaMedicalCollege, where Gautam and Ashish are final year MBBS students, has suspended the duo. Chairman of the college, S Peter, has said that a three-member committee has been formed to investigate the incident and the duration of the suspension will be decided according to the findings.

But activists intend to mount pressure on the medical council of India and the Tamil Nadu government to ensure the two students do not go on to become doctors. With the video showing the kind of persons they are, activists want to focus on their questionable ethics and ask: Can such people be doctors you would trust?