'Jaiswal is not a person to challenge the government.'
'He is a man who is known to go with the flow.'
Aditi Phadnis reports. 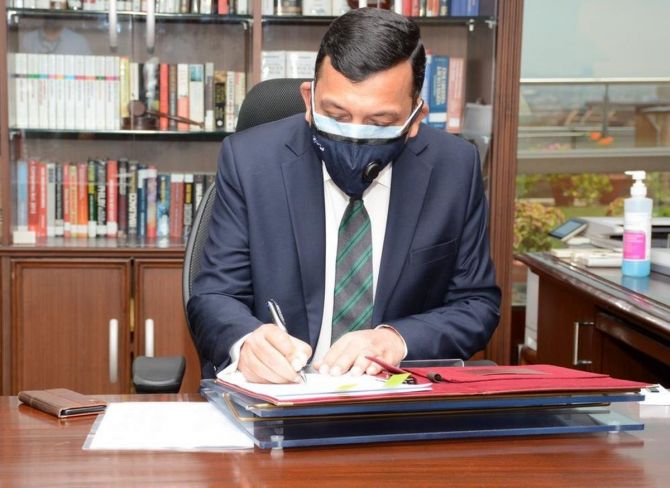 IMAGE: Subodh Kumar Jaiswal took charge as director of the Central Bureau of Investigation on May 26, 2021. Photograph: https://cbi.gov.in/

With the appointment of Subodh Kumar Jaiswal, 58, as director of the Central Bureau of Investigation, the investigative agency is headed for a phase of tranquility and much-needed quietude, senior police officers say.

Jaiswal has been appointed for two years, the term fixed for CBI directors.

"No rabbits out of the hat. He (Jaiswal) is not a person to challenge the government or adopt a posture of aa bail mujhe maar (invite confrontation). He is a man who is known to go with the flow," says a senior IPS officer who retired as police commissioner.

Officers concede that CBI has been through an ordeal.

If it had had its way, the government would have appointed Rakesh Asthana as CBI chief as far back as 2016 when then director Anil Sinha retired.

A promotional video film about him -- and there is no reason to believe he did not authorise it -- begins with shots of Sardar Patel, Swami Vivekananda and R K Asthana, in that order.

He was appointed interim director, a signal of a bigger prize in the offing.

Instead, because there was a stand-off in the committee that appoints the CBI director (comprising the PM, the leader of the Opposition and the Chief Justice of India), Alok Verma was given the job as the senior-most.

Asthana was furious, not the least because Verma had the reputation of being punctilious and unbending.

He complained to the Cabinet secretary that Verma was corrupt and had accepted bribes to direct/bury some cases.

The government had to order a Special Investigation Team to investigate the investigators.

Nothing has been heard of that report.

Internally, the CBI was roiled by fratricide.

When Verma finished his (short) tenure, Rishi Kumar Shukla was made CBI chief as Asthana was shunted out.

This time around, Asthana's name was very much on the list.

But Chief Justice N V Ramana drew the government's attention to a clause in the terms of the appointment that says anyone who has less than six months to retire should not be considered for the job.

That ruled out several hopefuls -- including Asthana.

"This much is true: Asthana knows the CBI like the back of his hand. Jaiswal is an outsider. But no harm done," says a senior IPS officer.

What goes in Jaiswal's favour is his affability, friendliness and capacity to pull along with the government.

"He is quite a political being," says one of his contemporaries.

He comes from Dhanbad, then in undivided Bihar, now in Jharkhand, from a business family.

In his generation, he is the first bureaucrat.

He started his career as an additional superintendent of police, Amravati, Maharashtra, in 1986, serving in the Gadchiroli district, a hub of left-wing extremism.

When the high court ordered a SIT to examine the operations of Abdul Rehman Telgi's fake stamp paper scam, Jaiswal headed the investigation that was later taken over by the CBI.

He investigated the Malegaon bomb blasts (2006) and when he was posted in the Intelligence Bureau, came in close touch with Ajit Kumar Doval, the man who would later become national security advisor.

He stayed in Delhi in the Research and Analysis Wing for close to a decade.

In 2018, he returned to Mumbai as the police commissioner under the Devendra Fadnavis-led Maharashtra government.

A year later in February 2019, he was appointed Maharashtra's director general of police.

The Elgaar Parishad and Bhima Koregaon violence cases were investigated during his tenure as DGP.

The Elgaar Parishad case was transferred to the National Investigation Agency in 2020.

More recently, Jaiswal was one of the most visible and vocal senior police officers handling the lockdowns in Maharashtra.

However, he sought -- and got -- a transfer to Delhi as the chief of the Central Industrial Security Force following differences between the state government and the police force.

Commenting on this, in January this year, Fadnavis, now the leader of the Opposition in the Maharashtra assembly, said: 'It is a very sad and unfortunate development that a good officer like him (Jaiswal) had to request for a central deputation. He is a good officer, but he was frustrated due to the continuous interference from the government, particularly the state home ministry.'

The CBI has many challenges ahead of it.

The most recent is the Narada scam, which relates to a sting operation by the Narada News Web site in 2016 that had allegedly shown Trinamool Congress leaders, MPs and cabinet ministers accepting bribes.

Last month, the investigating body had to withdraw its Supreme Court appeal against some high court orders granting bail to individuals involved in the case with the apex court making stinging verbal observations on the arguments of the CBI lawyer, Solicitor General Tushar Mehta.

In some ways, this highlighted the legal infirmities in its arguments against the background of politics.

Keeping the CBI out of politics will be Jaiswal's biggest task.