'It appears that Prime Minister Modi has to undo 50 years of State monopoly in the defence sector during which public undertakings like HAL or DRDO monopolised defence production and development with disastrous consequences.'

'It is high time the Indian private sector brings its dynamism into play and gives Mr Modi a boost to realise his Make in India dream,' reports Claude Arpi from Aero India 2015. 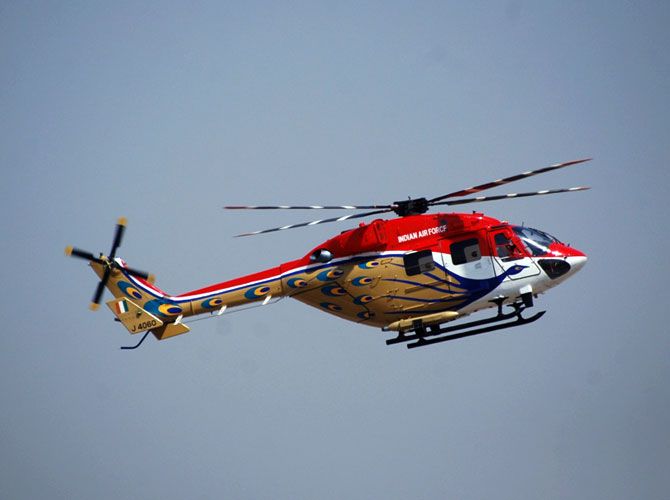 As Aero India 2015, organised on the theme 'Make in India', concluded at Yelahanka Airport in Bengaluru, it is perhaps time to take a fresh look at India's development and problems in aerospace, defence, civil aviation and defence manufacturing.

The 2015 show was a big one: More than 700 companies participated; big players like Israel, Russia, France and the United States came to Bengaluru with impressive armadas of equipment and staff.

A telling incident: As I was walking through the stands, a French exhibitor said how impressed he was by India. "Do you know in France, we have only a couple of publications devoted to aviation/defence. I am surprised to see so many here," he said.

I tried to enumerate a few and reached nearly ten. Later I enquired with a retired air marshal of the Indian Air Force, he smiled and told me: "You are wrong, we have 37 publications."

During the air show, some of them published a daily update of several pages, edited at night between Bengaluru and Delhi and printed in the IT City for free distribution the next morning at 9 am.

It does show the extraordinary vitality of the defence sector in India. It is true that the theme of the 2015 edition of the air show -- 'Make in India' -- was particularly exciting for the professionals.

It is a rather new development that the biggies (Indian and foreign) want to make in India and participate in Narendra Modi's flagship scheme.

The Indian Defence Budget, estimated at Rs 2.29 trillion ($38.35 billion) for 2014-2015, makes many salivate; everyone hopes it will increase in following years.

The prime minister made very clear that India wants to 'build an industry that will have room for everyone -- the public sector, the private sector and foreign firms.'

This is a major change of direction which will probably make the scheme work: 'I am confident that India will emerge as a major global centre for defence industry. We want to develop an industry that is dynamic. It should constantly stay at the cutting edge of global industry. We must involve our scientists, soldiers, academia, industry and independent experts more closely in research and development,' the prime minister said. 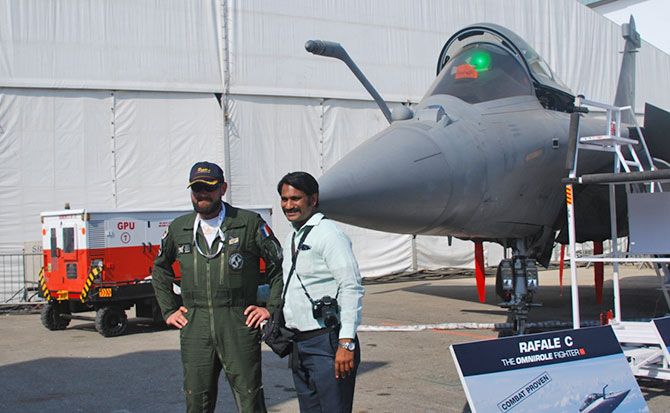 But there is a long, long, way to go.

Take a small indicator of the present level of 'Make in India'; the media received a press kit prepared by the organisers. The badges and other papers were stacked in a nice black bag; when I opened it, I immediately saw a 'Made in China' label.

When asked why we were given Chinese bags, an organiser sheepishly answered: "Sorry, Sir, we have a certain budget, and this bag is four times cheaper that an Indian equivalent. What can we do, Sir?"

How and what to 'Make in India' is a major issue to be solved for the Modi Sarkar.

The bag was not an isolated case, but a general one: While passing the mega Israeli stand, I saw some good looking badges with the Indian and Israeli flags, and guess what? 'Made in China!'

Dassault Aviation, one of the stars of the show with the Rafale deal under finalisation, was distributing caps which were very useful while wandering near the tarmac, watching the exercises of the big and smaller birds under the scorching sun.

Dassault's cap was 'Made in Thailand.' The IAF had been cleverer, the 'Tejas cap' had no label.

This just shows the distance to be travelled, and it was not about badges or bags that the prime minister was talking about when he said he wanted to end India's status as the world's number one defence importer. He wanted eventually to have 70 per cent (from the current 40 percent) of hardware manufactured domestically by 2020.

Mr Modi explained: 'We have the reputation as the largest importer of defence equipment in the world, that may be music to the ears of some of you here. But this is one area where we would not like to be number one, we are reforming our defence procurement policies and there will be a clear preference for equipment manufactured in India.'

The Rafale deal was, of course, the talk of the air show. The long delayed $20 billion deal to supply 126 Medium Multi-Role Combat Aircraft, MMRCA, to India, was accompanied with the rumour that the deal might be scrapped.

In January 2012, Dassault Aviation of France had won the right 'for exclusive negotiations' with the ministry of defence for the supply of these combat aircraft.

During his press conference, Defence Minister Manohar Parrikar clarified that he was expecting a report from the Contract Negotiation Committee before the end of February or latest during the first week of March.

A decision would then be taken. 'I have asked the CNC to speed up the process of completion of the report for us to take a decision on the acquisition of the Rafale,' he told a press conference. There was no question of cancelling the deal, the minister just said: 'The CNC is reviewing the long-term costs or the life-cycle costs, incurred over the life of the fighter.'

Air Chief Marshal Arup Raha clarified the next day that out of four sub-committees, three had already finished their jobs, only the last one was to give back its copy.

The difficulty seems to have arisen due to some lack of clarity in the procurement policy and the fact that the currency exchange rate has tremendously changed during the last three years. An issue not easy to solve.

It is obvious that a 'political' decision between the French and Indian governments will have to be found. France's Defence Minister Jean-Yves Le Drian arrives in India on February 23 to iron out differences.

As in the Egyptian deal for 24 Rafales, the negotiations have to move to the political level where each side will have to make some compromises to find a solution acceptable by both parties. Air Chief Raha also said there was no plan 'B' for the time being, as the IAF is keen on the MMRCAs.

During the air show, the US once again had the largest contingent with 64 companies including Boeing and Lockheed-Martin. This is understandable after President Barack Obama's visit and the new opening provided by the renewal of the 10-year Defence Framework Agreement between India and the US, as well as the US President's promise to invest in the 'Make in India' scheme.

Let us not forget that Washington has recently displaced India's traditional supplier, Russia, as the country top supplier of armaments. 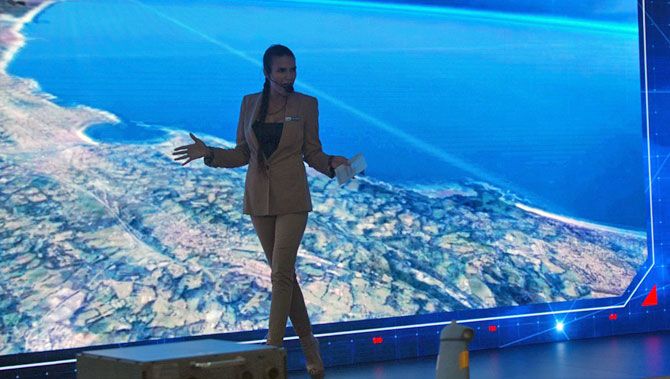 Israel had one of the most popular stands, partly due to the presence of a extremely tall and beautiful model, dancing in front of Rafael's missiles and other Israeli defence equipment. Civilians and defence forces personnel alike were glued for the superb presentation of Israel's prowess.

Defence Minister Moshe Yaalon's presence, surrounded by watchful security officers, probably helped to focus on the success of his country and his newly-found interest in 'Make in India.'

The Israeli embassy acknowledged that the Jewish State was open to technology transfer and joint production of hardware with India.

Russia had also come en force, but without tall models to highlight the quality of its decades-old collaboration.

The ambitious Fifth-Generation Fighter Aircraft or FGFA, for which India has committed billions of dollars to Russia to design and develop a prototype, was mentioned during the press conference of the heads of the Russian defence industry; they were hopeful to find a solution to the present difficulties, they affirmed.

India's air force would need the FGFA for its requirement for the next 15 to 30 years, but serious problems remain to be sorted out: 'We have spent $295 million on design. Discussions are on (with the Russians) on the development phase,' declared Hindustan Aeronautics Chairman T Suvarna Raju.

Ultimately, it appears that Prime Minister Modi has to undo 50 years of State monopoly in the defence sector during which public undertakings like HAL or DRDO monopolised the defence production and development with disastrous consequences visible for all today (for example, India's Light Combat Aircraft, the Tejas, has not yet got its Final Operational Clearance).

It is high time that the Indian private sector brings its dynamism into play and gives Mr Modi a boost to realise his 'Make in India' dream.

After all, Lockheed-Martin, Dassault, Boeing, Rafael and others foreign players are private companies working closely with their governments to take care of their country's respective defence requirements and export their products.

The presence of Mr Mukesh Ambani, Mr Ratan Tata and others industrialists at the air show proves that the 'big ones' are ready to take on the challenge.

It is a positive sign for India, but the battle is far from being won. There are many babus hiding in the corridors of South Block who may lose their 'powers' in the process and they will try their best to scuttle Mr Modi's plans.

Claude Arpi, for Rediff.com in Bengaluru