'As our lives have become more complex, so laws have proliferated, now invading the most intimate interstices of daily life: Food, entertainment, education, health, travel, communication -- all of it is in some sense regulated.'
'Many of these laws are abominably drafted.'
'They are anything but clear.
'That is the first failure.'
Videos: Hitesh Harisinghani/Rediff.com 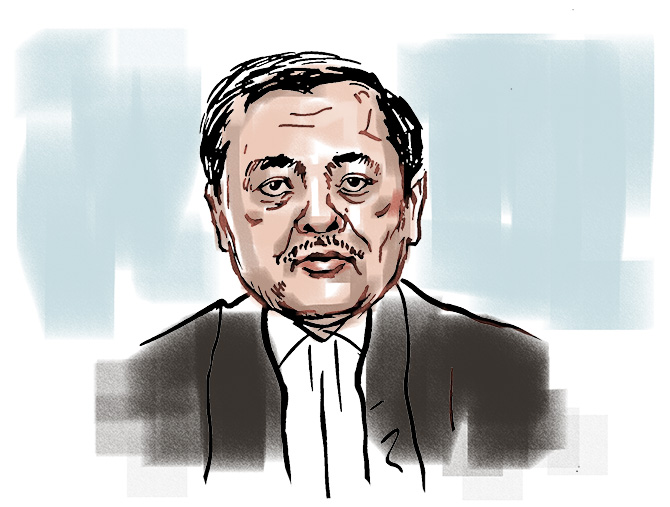 At the first J B D'Souza Memorial Lecture, delivered last week at the Hall of Harmony -- there could not have been a more appropriately named location -- at the Nehru Centre, Mumbai, his eloquent speech would have made the man the event sought to honour, smile.

"Joseph Bain D'Souza," said Judge Patel, "Bain to his family and friends, could himself be more than somewhat intimidating, especially to those who did not immediately have the measure of his ethical and moral centredness.

"My association with him spanned decades. My memories from my childhood are of a tall, lean, quiet and apparently stern man, somewhat forbidding, with the watchful look of a bird of prey."

"It is perhaps ironic that I am here today, for as a child, I felt that in his presence it was better not to speak at all."

"He wasn't actually like this, but that knowledge came only much later. When I began my practice in law, I got to know him differently: one who lent his name to the many causes in which he believed: riots, urban issues, intolerance."

The late 'Bain' -- whom older Mumbaikars will remember as the city's municipal commissioner and the state's chief secretary, a unusual bureaucrat who carried on his responsibilities towards his city even after he retired -- would have applauded Justice Patel's hard-hitting speech.

Here are a couple of examples.

"Some years ago, a particularly strident politician better known for her collection of handbags and her penchant for statues, not least of herself (with said handbags of course) pronounced, 'One day, I too shall rule India.' I remember thinking to myself, 'No, madam, you will not. You will never 'rule' India. You may one day be given a shot at governing it, but so long as we have the Constitution, there will be no ruler."

"So whose government is it anyway? Who do our non-elected administrators serve? It does not seem to be the people. It is not even elected politicians, for -- at least in theory -- there is a go-around every five years. Who then? The answer is plain and does not need spelling out. These bad governors are our modern day equivalents of Mephistopheles, and they occupy offices in the very secretariats and Mantralayas that were once used by true public servants like Bain."

It was a fitting tribute to an inspiring, upstanding bureaucrat and was organised by Citizens for Peace and the D'Souza family.