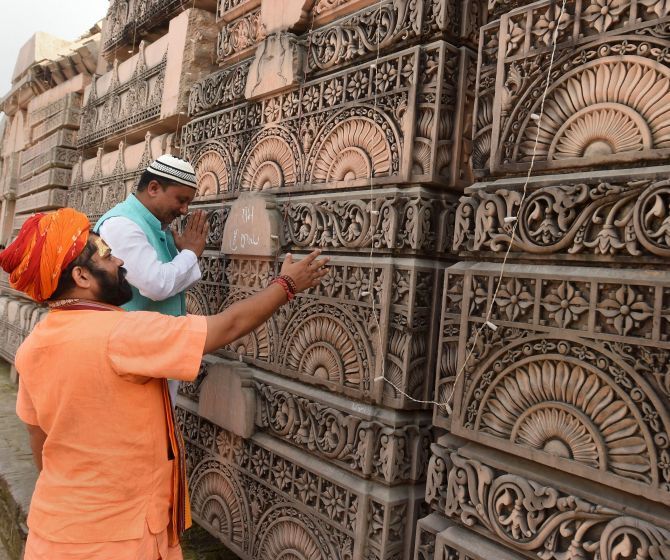 Disciples of Mahant Nritya Gopal Das, who was at the forefront of the Ram Janambhoomi agitation, were upset when his name did not figure in the first list of Ayodhya temple trust -- the Shri Ramjanmabhoomi Teertha Kshetra -- members announced by the central government last week.

Mahant Kamal Nayan Das, Mahant Nritya Gopal Das's successor, hurriedly called a meeting of seers to discuss the issue that was to be followed by a press conference.

Ayodhya MLA Ved Prakash Gupta, who played an important role in placating the mahants and their disciples, reveals to Rediff.com's Prasanna D Zore how the mahants were won over.

Mahant Nritya Gopal Das has been made an accused by the CBI in the demolition of the Babri Masjid case.

Champat Rai, secretary of the Ram Janmabhoomi Nyas, was also made a co-accused, so their names were not included in the names that were declared for the trust.

But considering the cases against them, the government left two vacant places on the trust.

Given this technical issue, the Centre did not announce their names.

The first meeting of the trust will take place on February 19, and the members (who have already been named and which include senior lawyer K Parasaran, and religious leaders like Jyothishpeethadheeshwar Swami Vasudevanand Saraswati Maharaj from Allahabad, Pejawar Math in Udupi, Jagatguru Madhavacharya Swami Vishwa Prasannatheerth Maharaj, Yugpurush Paramanand Maharaj from Haridwar, Jagatguru Shankaracharya, Swami Govinddev Giri Maharaj and Vimlendra Mohan Pratap Mishra from Ayodhya. The trust also includes Kameshwar Chaupal from Patna, Mahant Dinendra Das, Nirmohi Akhara, Ayodhya Baithak and Anil Mishra, a homoeopathic doctor from Ayodhya) will move a resolution for Mahant Nritya Gopal Das's appointment as the president and Champat Rai as the secretary of the trust.

There was some confusion among Mahant Nritya Gopal Das's followers and disciples; the Mahant himself wasn't upset.

It is only natural for the followers to be upset to know that their names were not in the list announced by the government.

When we met them we apprised them about the technical problem in announcing their names by the government because of the CBI's case against them.

Let me tell you as the elected representative of Ayodhya, he was told that his spearheading of the Ram Janambhoomi agitation was noteworthy and it was impossible to not have his name among members of the trust.

If the government had announced their names, it might have created some problem. Some people could have gone to the Supreme Court. That would have led to a delay of two-three months in the work of forming the trust. So, it was avoided.

Since the trust formed is an autonomous body, the Shri Ramjanmabhoomi Teertha Kshetra will be free to take decisions about the appointment of the president and secretary of the trust.

The trust will take this decision at its very first meeting on February 19. The trust members will move a proposal seeking his (Nritya Gopal Das's) appointment as president and Champat Rai as secretary of the trust.

There was no issue with Mahant Nritya Gopal Das. He is a man of composure and calm. His followers were a bit upset.

These followers had some misunderstanding that his name would not be included. He was told about the legal problems in the government announcing their names.

Opponents of the Ram Janambhoomi movement would have gone to the Supreme Court and that would have led to a delay of two-three months in the formation of the trust.

Once his appointment as the president is made and he is inducted as a member of the trust, Mahant Nritya Gopal Das will be part of all future proceedings of the Shri Ramjanmabhoomi Teertha Kshetra.

He was told that his presence among the members is of utmost importance and there is no way he won't be a part of the trust.

There was no politics in not announcing his name, but his name was not announced because of a technical point.

Formation of the trust had to happen in a systematic way without inviting any technical hurdles. Now that the trust has been formed, his and Champat Rai's names will be included in the trust.

Constructing a Ram temple in Ayodhya

Both Mahant Nritya Gopal Das and Champat Rai were taken into confidence and they appreciated the home minister's gesture.

Now, there is no confusion at all and everybody will now work together to fulfil the wish of all Indians of constructing a grand and magnificent Ram temple in Ayodhya.

The work to build a grand temple has been started.

The trust will conduct its first proceeding on February 19. This meeting will move a proposal for the induction of new members and announce the date when the construction of the Ram temple will begin.

The model being built by the Vishwa Hindu Parishad is 70 per cent complete and it won't take more than two to three years for the construction of the temple in Ayodhya.

For centuries, the people of Ayodhya and this country had been looking forward to a Ram temple in Ayodhya. Now that the moment is just a few years away.

Ayodhya is looking forward to establish its name among the best spiritual and religious pilgrimages in the world.

Constructing a mosque in Dhannipur

We have declared our full-hearted support for the construction of a mosque in Ayodhya's Dhannipur village and will offer all help for its construction if any help is needed.

Not just me, but everybody in Ayodhya will be eager to be part of anything constructive.