Donald Trump and General H R McMaster: It is almost like the Chinese monarch Helü with Sun Tzu at his side. 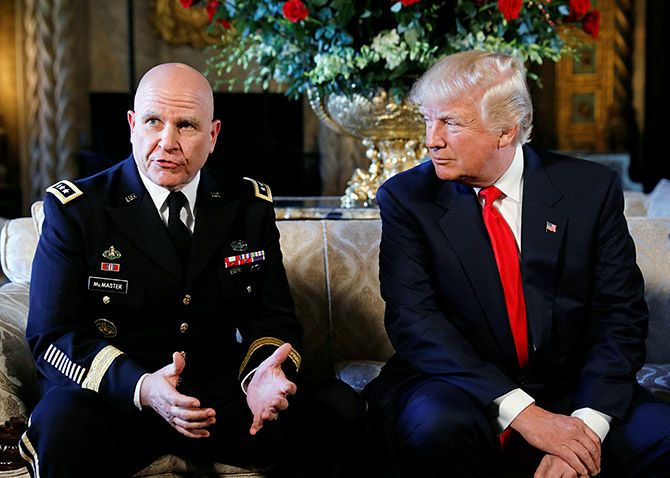 At last, a Trump appointment that one can cheer.

By nominating Lieutenant General H R McMaster as his national security adviser, America's president has appointed a brainy thinker on warfare and strategic affairs to conceive, create and oversee the most powerful nation's plans to deal with its enemies and friends.

It is almost like the Chinese monarch Helü with Sun Tzu at his side.

A quick ready reckoner on the three-star general who still serves in the US military, and will certainly erase memories of the disaster after Lieutenant General Mike Flynn resigned as Trump's NSA less then three weeks into the new president's tenure.

General McMaster is not the first serving general to be America's NSA. Colin Powell, another lieutenant general, was President Ronald Reagan's NSA from 1987 to 1989, restoring order in the White House after the Iran Contra scandal.

Herbert Raymond McMaster first earned notice during the first Gulf War in 1991. The young captain -- he was just 29 (he is three weeks to the day younger than Tom Cruise) -- led his 9 Abrams tanks to battle against 80 Iraqi tanks and sundry vehicles, all of which his formation destroyed without suffering a single casualty.

For his courage and leadership at the Battle of 73 Easting he was awarded the Silver Star (H R also has been awarded a Bronze Star and Purple Heart for subsequent gallantry).

He quickly demonstrated that he was a military thinker as well, by writing Dereliction of Duty, which argued that US generals had not forcefully contested the Lyndon B Johnson administration's Vietnam war strategy even though they clearly knew it was traveling down a one way street.

The book and his subsequent essays on warfare won him acclaim worldwide, but H R was not going to be confined to a lecture hall.

Assigned the nightmare from hell area of Tal Afar in Iraq in 2005 -- 'in that city of 200,000 people,' The Wall Street Journal reported in a profile of McMaster, 'the insurgents' "savagery reached such a level that they stuffed the corpses of children with explosives and tossed them into the streets in order to kill grieving parents attempting to retrieve the bodies of their young," wrote Tal Afar's mayor in 2006. "This was the situation of our city until God prepared and delivered unto them the courageous soldiers of the 3d Armored Cavalry Regiment".

'When Colonel H R McMaster was assigned to Tal Afar in 2005,' economist Tim Harford wrote in the Financial Times, 'he decided to try something new. He put an end to the useless sorties into Tal Afar and committed his 3,500 men to holding Tal Afar, neighbourhood by neighbourhood, operating out of 29 small outposts."

'If there was a coherent strategy in Iraq then, it was based on the belief that the Americans were losing a popularity contest with the insurgents. Col McMaster believed that view was wrong: The problem, instead, was that locals were refusing to help the US because they knew Americans in isolated desert bases could not protect them from reprisals,' Harford wrote in his essay 'Lessons from war's factory floor'.

'Col McMaster's strategy was based on the idea that if his men were fully committed to Tal Afar and to the protection of its citizens, locals would co-operate eventually. Col McMaster, who has a PhD in history, was well equipped to identify and implement a variation of successful counter-insurgency tactics that had been used, for example, by the British in Malaya.'

'Only a couple of months later it was clear he had been right.'

The colonel's strategy was widely copied later by the US military in Iraq and Afghanistan, and yet, despite his proven military genius and courage, he was not promoted to brigadier or brigadier general as the Americans like to describe that rank in 2006 and 2007.

Three weeks short of his 47th birthday in June 2009, he was promoted. A year later, he was sent to Afghanistan.

As always, he brought his famous brain-meets-true grit approach to to the assignment.

'What do the Taliban have to offer the Afghan people?' he asked when the Wall Street Journal interviewed him.

'Are these virtuous religious people? No, these are murderous, nihilistic, irreligious people who we're fighting -- we along with Afghans who are determined to not allow them to return.'

Taliban groups, he told the WSJ, are increasingly seen by Afghans 'as a tool of hostile foreign intelligence agencies. These are people who live in comfort in Pakistan and send their children to private schools while they destroy schools in Afghanistan.'

The Taliban fighters, he noted, wondered where their leadership is. 'One of the maxims of military leadership is that you share the hardships of your troops, you lead from the front. Well, they're leading from comfortable villas in Pakistan. So there's growing resentment, and this could be an opportunity to convince key communities inside of Afghanistan into joining the political process.'

McMaster, General Martin Dempsey, the US army chief of staff, remarked with some awe was 'probably our best brigadier general.'

H R didn't have to wait long to add more stars to his epaulettes. Promotion to major general (two stars) and lieutenant general (three stars) came within 24 months of each other.

A couple of months after he had been nominated to his present rank, in 2014, Time magazine included McMaster as one of its 100 most influential people in the world.

'Herbert Raymond McMaster might be the 21st century army's pre-eminent warrior-thinker,' Lieutenant General Dave Barno (retd) wrote in Time, adding,'H R is also the rarest of soldiers -- one who has repeatedly bucked the system and survived to join its senior ranks.'

After he served President Reagan with distinction -- there is the apocryphal story of the helpless Gipper turning to the general almost for sanction for a decision, only to be told, 'Goddammit, Mr President, you are the President!' -- Colin Powell went on to be the Chairman of the US Joint Chiefs of Staff, the highest position in the American military, incidentally, the first Black to occupy that post.

Powell also had a less successful tenure as President George W Bush's first secretary of state, ambushed repeatedly by the mean combination of then vice-president Dick Cheney and secretary of defence Donald Rumsfeld.

Don't be surprised if General H R McMaster emulates General Powell, and perhaps ascends to the one rank that the latter military leader shied away from -- the President of the United States.