'Arthur could tell Hrithik, Kajol they made him feel old...'

'...because he had interviewed their grandparents in their heyday.'

P Rajendran looks back on the 11 plus years he worked with Arthur J Pais, the India Abroad and Rediff.com editor, who passed into the ages on January 8. It isn't often that you could get to meet a cook, a hitchhiker, a gourmet, an author, a film critic, a professor and a feature writer in the same room.

But that would be if it were in Arthur's room, for he was all of those and a lot more besides.

Of course, to readers of India Abroad (the oldest and best-known Indian-American newsweekly, which Rediff.com has owned since April 2001), Arthur is best known for his fecundity in writing -- on a variety of topics.

He hated to let a story be given less than what he thought it was due and once asked the India Abroad coordinator that he be given any story on current events, top scholarships and awards, achievers of all ages, food, books, movies, crime, religion, discrimination of every stripe -- and yes, sex.

Arthur was perhaps the most knowledgeable expert on popular Hindi cinema outside the industry. He could tell you about ribbing actor Motilal, who used to live opposite his hostel on B Road, Churchgate, in what was then Bombay.

He could gossip about his time on the panel of India's 28th National Film Awards in 1980, when actress Shobhna Samarth put down a competing film starring her daughter Nutan, with whom she would reconcile only two years later.

He could speak fondly of sitting in a train, held up at a station, while he and others sat drinking with director G Aravindan.

During an interview he could remind director and actor Raj Kapoor about an ad he'd put in a film magazine that spoke of three upcoming films, of which he had not made one.

He could tell actors like Hrithik Roshan and Kajol that they made him feel old because he had interviewed their grandparents in their heyday.

Arthur loved that -- focusing on the personal side of his subject rather than the merely professional.

And so, while he loved books, he sought more than mere content in them, diving into them to root out relationships and insights in the dedication, acknowledgment pages and in the forewords.

His house and office space were always bristling with books, with first editions jostling for space with signed copies, detective novels fighting for space with avant garde literature, and classics making do with the space allowed them by autobiographies and histories. He often complained that people went through his office looking for great books. But never mind, he had saved the best of them from the vulgar hordes by stashing them at home.

When he tired of reading at home, he would repair to a nearby Dunkin' Donuts, where between reading and sipping coffee, he would chat with the Arab servers there about the interesting places he had seen in their country.

Arthur did his early schooling in a Kannada medium school and so found himself at a disadvantage when he was admitted to a Madras college where English was the language of the realm, and where fellow students were not coy about calling him out on his awkward syntax. He may have had the last laugh, given that it was he who became the celebrated writer, but it may have left him with an acute intolerance to errors in language.

He enjoyed telling of the time that he, along with a friend, went by boat and motorcycle all over the Middle East and Europe, doing odd jobs along the way. This, at a time few Indians could imagine going out of the country using even conventional modes of travel.

In Bombay, Arthur got into feature writing, in one case prematurely announcing the demise of writer and political activist Ayn Rand. He loved telling that story. Arthur, his friend Anand Doraiswamy and others used to get together to find out the exact music ripped off in such famous film songs from Babuji Dheera Chalna (from Doris Day's Perhaps, Perhaps, Perhaps), Dil Tadapke Keh Raha (from the Polish folk song Sz?a dzieweczka do laseczka), Ye Dil Na Hota Bechara (from the River Kwai March), Itna Na Mujhse Tu Pyar Badha (from Mozart's 40th Symphony), and more.

Despite knowing the problems in them, he enjoyed every kind of Hindi film song. That was clear, the way he laughed and stamped his feet in excitement like a child, scratching his bristly beard, while a colleague struggled to identify a song that he himself couldn't remember, but for the fact that it was a song by composer Salil Chowdhury and had this particular word in it.

But for the most part Arthur could tell you every detail about a film, including the gossip associated with it and whether it was success in financial terms. That was why he would sizzle and seethe when a film was declared a hit by some journalist who didn't consider what was spent on making it in the first place.

He also adored the theatre and wrote previews about the top plays on and off Broadway, and remained always on the lookout for a bargain ticket.

He loved food and would try almost anything. He wrote at length about many kinds of cuisine and often interviewed authors of cookbooks, including recipes to go with the piece. He was himself the co-author of a book called Curries of India.

Over the years, he cut down on meat and found refuge in organic foods.

Arthur loved shocking people. His language could shift from the naughty to the risque and pungent, before deciding between the scatological and downright prurient. If he was quick to anger, he was also easily pleased. All it took was a cup of milky coffee for him to grin in pleasure and declare, 'Oxygen, oxygen.'

When he thought praise was deserved, Arthur was never niggardly with it, often unguardedly describing exactly what he thought was good -- even if there was hope of no personal or professional gain.

Along with his wife Betty, he funded the education of children in India and other countries. And, as Sree Sreenivasan, co-founder of the South Asian Journalists Association, reported, he also funded SAJA student memberships.

If there was anything Arthur feared, it was the medical system. He would rail against arrogant doctors and argue passionately that a natural living and eating were proof against most ailments that plagued human society.

And if there was anyone that Arthur respected, it was the imaginary but ever-present readers of his pieces.

If it had not been for kidney disease and diabetes, Arthur would have been writing for much longer.

So yes, given the loss that means, the reader did deserve better.

He will be missed. The man who stole India's past
The Daughters of Bihar 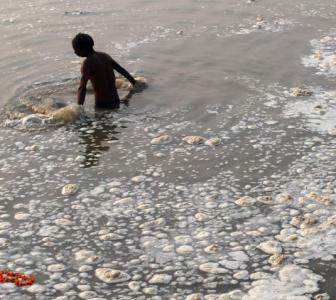