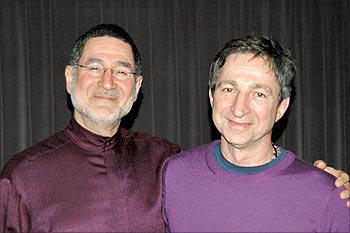 Canadian actor Michael Rudder had a close encounter with death.

He was shot three times while he was dining at the Tiffin restaurant at the Oberoi hotel on the night of November 26, 2008. His wounds may have healed but he cannot revert to his acting career.

He was part of a group of 25 members of the Synchronicity Foundation, a meditation and yoga organisation based in Virginia, USA, who were in Mumbai for a meditation camp.

One of the doctors at the Bombay Hospital, he said, told him they "almost lost me twice that night on the operating table, but I came back."

"I am very, very grateful to the medical team at the hospital as they were very, very kind" says Rudder who is in constant correspondence with them.

What are your thoughts a year after the Mumbai terror attacks?

I always remind people that tragedy and comedy are choices that we make. I don't see myself so much as a victim.

My philosophy is greatly influenced by Indian thinking that we are always where we are supposed to be, even if we don't chose to be. Specifically I didn't wake up that tragic morning saying, 'Ah it is a perfect day to get shot'.

I think that reality is such that we live, what we are supposed to live. For me it was a very educational experience including understanding the death of my friends and witnessing all that -- the deaths of Naomi and Alan Scherr.

How is your health now?

I am feeling stronger now. The last of the wounds that has been troubling me, has healed. I am feeling more ready to come back into my regular lifestyle.

Could you recount what happened the night of the attack?

I was spending the day with Master of Meditation Charles Cannon in the company of Honoured Swami Sri Swami Muktananda Baba on the outskirts of Mumbai and we had just returned after meditation. Six of us were sitting at a table in the Tiffin restaurant.

I can recall that I told my friends, 'Everyone's very exalted by the evening meditation programme, so there's no need to drink wine. I was high, exalted and quite intoxicated with the bliss of being.'

One minute we were wondering and talking about intoxication and the next minute guns were firing -- one minute we were sitting enjoying a meal and the other minute that we were diving for cover and the room was full of gun fire.

There were six of us at the table. Four of us survived. And the entire meditation group comprised of 25 people from different countries. And they were all, with one exception, stuck in the hotel for the entire duration of the siege. We lost two friends in the tragedy.

What did you see at the Oberoi?

The gunman came through the lobby and gun fire filled the restaurant. We were all trying to simultaneously get the table away so that people could get down. I was shot first in the right arm below my shoulder.

I watched my white shirt immediately turn completely red, an astonishing visual. Because I was in a very humorous mood I remarked to myself, 'Boy this is like the Bruce Willis movie Die Hard. I looked at my shirt and it was completely red. The bullet wound caused a great deal of pain. Bullet wounds are not generally painful per se after impact.

Did you not feel any pain?

It was an astonishing moment for me as I looked at my arm turn red from the bullet wound.

You were shot thrice?

Yes, once on my right arm, one on my buttocks and the third one on my leg. I discovered later that I had an AK-47 bullet lodged in my upper right part of my head, almost near the crown.

It was lodged in my head, but it didn't penetrate my skull.

After I came out of the hotel, I saw two men were carrying another person, who was shot. They put us in a cab and we zoomed straight to the Bombay Hospital. There was a wonderful man at the hotel named Chandrakant who helped me into the operating room and insisted that the doctor look at me.

He told the doctors that there is a bullet in his skull while the doctors insisted on him leaving the operating room. Chandrakant said he wouldn't leave till he was sure the bullet was taken out.

How many days were you hospitalised in Mumbai?

I was there for 21 days. I left Mumbai on December 17, after which I came to the Montreal General hospital where I stayed for about a month. I came back in January and for another 10 days in March.

Have you resumed acting?

I would be hard pressed to do an actual film shoot. I don't think I have that kind of strength as yet.

There was a report which said you won't do anymore bad guy roles.

I was just smiling at myself as I realised I can't be a part of a play that opens with revenge and violent reactions to someone who abused someone in war time.

I really am looking at that aspect. If now I use my creativity and love to express the peace and joys of life rather than focusing on all the horrible things that could happen in life that would be waste of my time.

You are now aware about what happened in Mumbai last year, which resulted in your brush with death.

I began to do some research. Because it is associated with trauma it goes quickly in my brain and I retire learning too much.

I was quite fortunate that my surgeons in India sent me intelligence updates as I came in and I spend some time researching the history of the relationship of the two countries and the possible benefactors of such an adventure.

Was it Pakistan by itself and all those questions -- they continue to fuel my interest. But I find it difficult to read about all that deaths.

Does it still affect you?

These were friends who died in that room and many other innocent people as well. Many other people's lives were equally affected as my life. From our table of six, there are still three of them who are still undergoing therapy and surgeries.

One of them is a wonderful yoga teacher in Toronto, Helen Connolly. She too was wounded. You can't escape that kind of violence.

I was fortunate that I didn't feel anything, but other people with us witnessed the deaths.

I was knocked face down. That prevented me from seeing what was happening, but I could hear what was going on.

These are different levels of post-traumatic effects and so you have different memories of the tragedy.

When I was regaining consciousness in the emergency ward at the Bombay Hospital I kept hearing an elderly man repeating a name over and over again.

At that time I was deep in trauma and not really aware of things and kept wondering who he was calling out to.

Later, I discovered that he was calling out to his wife. He was insane with grief.

You hear that kind of sound one time and you never forget it. My heart goes out to him. He was totally a stranger and I never got to know him.

Sometimes it could be disbelief about what happened on 26/11 and where you are today?

One doubts one's experience after it happened and after the family dinner the memories become a little cloudy.

It is a gift of life that I received. There I was in that room in the restaurant at the Oberoi with my friends.

Two of my friends are gone. I miss their voices and their company. I can't hug them. I can't joke with them any more but I have the gift of the experience of what life is. A lot of people don't understand this.

Wisdom will tell us that who we are is not this body per se and in that room I had that experience that I can't have it taken away from me in the aftermath.

They (his friends) came to in my meditation, within my inner eye. This happened at the Bombay Hospital. I know they are both well. I recognise that I was experiencing what they call a near-death experience.

One of the surgeons, Amod Rao, said to me 'You left your body twice on the operating table that night and both times you came back. You must be here for some reason.'

There was a marvelous chief of surgery for whom I have the highest respect, Dr M G Nariani. He was the head of my medical team at Bombay Hospital and I was grateful to receive the care of the medical staff at Bombay Hospital.

When I was coming back to Canada I said to myself, 'It is not going to be sweet as this experience has been.' They were very caring and perhaps motivated by the horrors of what had happened and it could be also due to the fact that I was a foreigner there.

They were phenomenally generous to me and very caring and I credit them to saving my life.